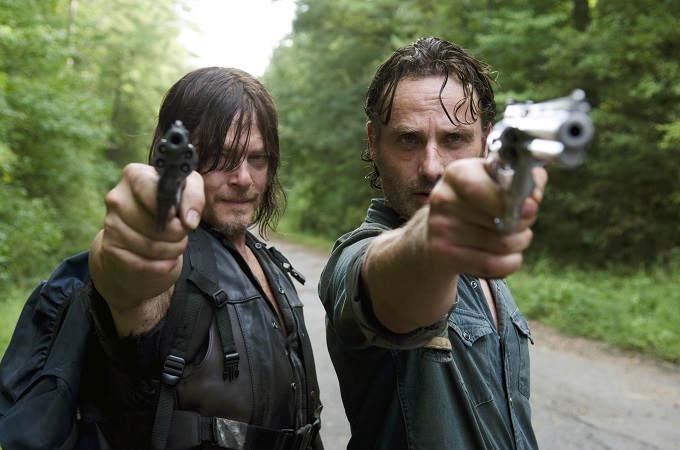 As could be expected after last week’s high-octane and insanely-intense mid-season premiere, the action is kicked down a few notches in tonight’s episode. This includes a time jump (although not as big of a one as in the comics), where the Alexandrians concentrate on rebuilding and getting back to some state of normalcy. Getting back to living also means resuming supply runs, and this time, Rick (Andrew Lincoln)  and Daryl (Norman Reedus)  are on point. However, what they find is a little more than they bargained for or wanted. In the meantime, new relationships are forged, one of which is definitely not a pairing I wanted or expected (if you continue reading, prepare yourself for a big rant on this one).

A GUY WHO CALLS HIMSELF “JESUS” — FRIEND OR FOE?

While Carl (Chandler Riggs)  is recovering from his injury, the episode opens with Rick and Daryl leaving on a supply run. Given everything that went down last week, life in Alexandria is going pretty well. Carl seems to have recovered well, Judith has a nice new dress, and the day begins with songs like “More Than A Feeling.” Nice. Very nice. And, yes, if you are like me and thought that Rick and Michonne seemed a little too cozy, stay tuned because you would be right.

Moving on, with Eugene (Josh McDermitt)  manning the main gate, we can count on Mr. Mullet providing his always hilarious and greatly-needed injection of humor. He gives them a map of the agriculture supply places in the area and says there’s “a criminally unrated grain” out there “that can change the game of our food situation from scary to hunky dunky.” With the typical blank stare on his face, he continues, “I’m talking sustainability, drought tolerance, a grain that’s the envy of all corns.” In short, Eugene wants them to look for sorghum. Without even looking up, Daryl quietly responds, “Thanks.” After last week’s “No Way Out” which was filled with nothing but death and despair, a lighthearted opening is exactly what was needed. 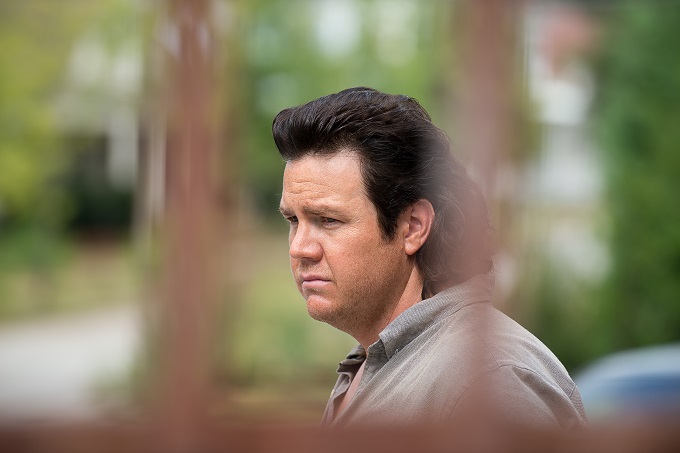 Just like the casting of Jeffrey Dean Morgan  as super-villain Negan, the casting of Tom Payne  as comic-book favorite, Paul “Jesus” Monroe, was announced relatively early, and so we knew to expect his first appearance sometime in 6B. Well, we finally get our first glimpse in tonight’s episode, and just like Eugene’s opening monologue, his introduction to Rick and Co. is just as hilarious. It all begins at a gas station where Rick and Daryl stop after finding the motherload of food and supplies earlier on at a sorghum store. Jesus literally comes out of nowhere and bumps into Rick outside the gas station. Rick makes a pitch to try and recruit him and take him back to Alexandria, but Jesus isn’t interested and he’s off just as quickly as he appeared. However, unknown to Rick at the time, Jesus managed to steal the keys to their truck. Rick and Daryl are then immediately drawn to a noise at the back of the gas station, which turns out to be a fireworks distraction orchestrated by Jesus as part his ploy to steal all of their stuff.

However, even though Jesus may have pulled one over on Rick and Daryl, it wasn’t over just yet. They are able to figure out where Jesus is headed and finally are able to catch up with him, where a huge fight ensues. As expected, it doesn’t take much for Daryl and Rick to subdue Jesus, and they decide to leave Jesus tied up, but with the knots loose enough to where he could escape fairly easily. So, back in the truck Daryl and Rick go, and it’s all over, right? Nope.

Much like the fast one Jesus pulled on Rick at the gas station, Jesus manages to get on the top of the truck but no one notices until they are miles out. By now, Daryl has just about had it with this joker and completely loses his sh*t. In one of the most hysterical scenes in the episode and while Rick is having to deal with walkers drawn to the noise, Daryl chases Jesus all over a corn field, and they start fighting all over again (and absolutely love the country music playing in the background!). Yes, folks, this episode is quickly turning into one of “The Dukes of Hazzard,” but so much better. This also causes them to accidentally release the emergency brake, resulting in the truck and all of the supplies rolling into the lake. What a totally messed-up situation, but honestly, you can’t help but laugh.

In the midst of the struggle, Jesus is also knocked unconscious. If it had been anyone else, they would have just left Jesus for dead, especially after he tried to rob him. But, Rick refuses to do that and decides to take him back to Alexandria as a prisoner so that they can glean how big a threat he may be.

I really don’t want to say much more here because I don’t want to spoil the arc for everyone, but I do want to say that while Jesus’ first impression painted him as a potential threat and quite possibly an enemy, trust me when I say he’s on our side and is very much a good guy. He belongs to another group of survivors called the Hilltop Colony and will be extremely valuable in Rick’s upcoming troubles with Negan and his Saviors.

OH MY GOD, DID I JUST HALLUCINATE — WTF RICHONNE??!!

You know, these past couple of seasons have been one of some really strange romantic pairings. First, we had Dr. Cloyd (Merritt Wever)  and Tara (Alanna Masterson), which for the fans of the comics was quite unsettling. In the comic-book series, Denise isn’t a lesbian and ultimately hooks up with Heath (Corey Hawkins)  thus creating one of the most memorable and iconic relationships. On first glance, the pairing seemed a bit odd, but in the end, it just worked.

Obviously, I was a tad bit upset with how the writers handled it in the television series, with their putting Dr. Cloyd together with Tara thus leaving Heath out there just hanging. However, this pales in comparison with what they pulled in tonight’s episode, and while there may be a part of the fandom that may be celebrating about now, I personally want to call Gimple and ask him, “What in the f*ck were you thinking?”

We’ve known Carl has grown to be quite close to Michonne. Even as far back as Season 4, we can remember scenes like the string cheese or the candy bar as the pair was heading towards Terminus. Or, the scene in the season 4 finale of Michonne comforting Carl after he is almost raped by Joe’s Claimers. Their relationship has gotten only stronger over the past couple of seasons, and tonight, we get to see just how much in a fantastic sequence between the two. 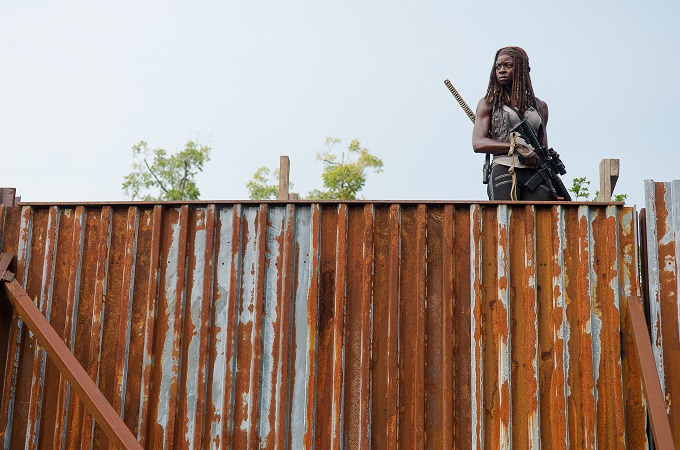 While Carl and Enid are out and about along the perimeter of Alexandria, Carl encounters a zombified Deanna (Tovah Feldshuh). I had wondered if someone would eventually find Deanna, and I am so glad the writers decided to include it. However, Carl refuses put her down and instead, decides to lead her back to Alexandria thus giving Spencer the opportunity to do so. He eventually talks about this decision with Michonne, who is somewhat taken back by Carl’s actions and even argues with him about it. However, Carl has a very eloquent explanation, one which brings the 2 even closer together:

It should be someone in her family, someone who loves her. I would do that for you — Carl to Michonne

It is obvious from this scene that Carl views Michonne as part of his family and quite possibly as a mother figure.

Very lovely scene, and if the writers had stopped here, it would have been all good. But, somebody, somewhere decided to make the jump to Rick being smitten with Michonne just because his son likes her so much. And, not so much smitten, but literally in lust with her because by the end of the hour and out of the clear blue sky, Rick and Michonne are in bed having sex. No romantic gestures (unless you count Rick bringing Michonne a pack of mints from their effed-up supply run). Not even much kissing. Just 0 to 60 in less than 3 seconds. WTH??!! What. The. Hell!

Now, I fully realize that a certain group of The Walking Dead fans have been campaigning for Rick to find love with Michonne for more than a year now, and there is even a campaign for Richonne to get together on social media. However, there have also been similar campaigns for a Caryl romance, but the writing team chose to ignore that one. So, why listen to the Richonne banter? Regardless of the reason, I personally think it’s one of the most unlikely and unbelievable pairings of any 2 characters on the show, mainly because we’ve seen Rick’s past choices in a romantic partner. Lori and Jessie had one big thing in common and that is they were both beautiful, “soft,” and very feminine. And, now, you have Michonne who while some may say is attractive is also muscular, rough around the edges and in some ways, masculine. It just makes no sense, and it feels so wrong. Again, what were they thinking?! #FacePalm

SETTING THE STAGE FOR THE FIRST BIG NEGAN CLASH

Well, after that scene of Rick and Michonne naked in bed that I don’t think I’ll ever be able to un-see (as I’m sure poor Jesus won’t either after having walked in on them!), we end the episode on a high note with some hints of the inevitable clash with Negan and his Saviors. Yes, folks, just because Daryl blew Negan’s Saviors to kingdom come last week, that doesn’t mean it’s over. In fact, far from it. Negan will eventually find what’s left of his crew and will ultimately follow the breadcrumbs back to Alexandria where there will be hell to pay, for sure.

As Denise had mentioned at the beginning of the episode, Tara and Heath are about to leave on a 2-week long supply run, and if you’re familiar with the comics, you probably immediately thought, “Uh, oh.” The players may be different, but there’s a similar arc in the comics, and all I can say is that this ordinary supply will likely not end well for one of the characters.

All in all, a decent episode but definitely not one I’d call a favorite especially with the whole Richonne shenanigan. Just basically a lot of table-setting. However, it did provide a fantastic introduction to one of the most memorable characters in the comics and with some hilarious banter between Daryl and the new guy on the block. Not to mention we’ve taken the first step towards the big Negan showdown at the end of the season, which I suspect the vast majority of the viewers are counting down the days for.