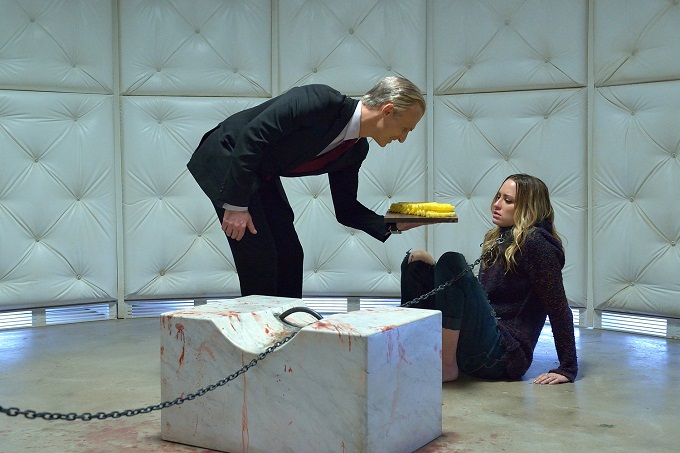 This quote was from last week’s episode, and most of us probably had a good laugh while thinking this was classic Eichhorst (Richard Sammel). Little would we know that, in reality, this was the pot calling the kettle black with Eichhorst having a similar sweet, little, young thing in his past and one that, even after over 80 years, still haunts him to this day. And, unfortunately for Dutch, it’s that same obsession that has brought her to Eichhorst’s infamous “breakfast room.” I don’t know about everyone else, but I think I would have felt better if she were brought there simply to be the suave strigoi’s next meal — and after just 5 minutes in that dreadful dungeon, something tells me Dutch is thinking the same thing.

THOMAS EICHHORST AND HIS 70-YEAR ACHE

I wrote a Character Analysis on Thomas Eichhorst last year, and one of the things I felt certain about was that there was a total lacking of romantic relationships in this guy’s past. Eichhorst struck me as a megalomaniac, a complete power-hungry control freak and definitely someone who wouldn’t let a woman get close to him and run the risk of being manipulated by the weaker sex. However, the foundation for that opinion was what we’ve seen of Eichhorst as a Commander in the Nazi Party. That small glimpse has been of a man who’s ruthless, who’s daunting, and who as Eichhorst says himself, “has the respect of all men.” But, as we learn tonight, the man wasn’t always the monster.

Instead, the “Tommy Eichhorst” we see in a brilliant series of flashbacks is a nice, respectful guy who is just trying to make a living selling radios — and who is absolutely horrible at it (and, yes, I burst out laughing seeing Eichhorst so young and so pitiful!). This Eichhorst has zero confidence which means he sells zero radios, equating to his having zero respect from his supervisor and peers. It’s almost painful to watch the poor guy. However, even though he’s at the bottom of the totem pole and is constantly bullied by his co-workers, cute “Tommy” still manages to catch the eye of the beautiful blonde bombshell secretary in the office, Helga (guest star Julie Engelbrecht).

This also gets Eichhorst a first date, which also includes a first kiss from the beauty. High five, Tommy Eichhorst!

It’s obvious Eichhorst is smitten with the girl, but that turns out to not be enough. One speech from an officer in the Nazi Party while they’re on their date, and all of a sudden, Eichhorst thinks he’s found his destiny, with part of that destiny being to wipe out all of the Jews. Well, I really think Eichhorst should have done his homework on his date because if he had he would know Helga is a Jew which results in a major foot-in-mouth moment. Oh, snap! As much as Eichhorst tries to stumble his way out of the brown mess he just stepped in, it’s too late, and Helga promptly gives him the slip.

I was wrong about you. You’re not destined for higher things, you’re exactly where you should be — Helga to Eichhorst

Ouch. If only Eichhorst had kept his damn mouth shut then he just might have gotten laid.

But, no worries because fast forward almost 75 years, and Eichhorst may have found a workaround to that — and that is where our poor Dutch Veldars (Ruta Gedmintas)  comes in. Dutch may not be Eichhorst’s long, lost Helga, but with some cherry-apple lipstick and a quickie date over some sliced pineapple, she’ll have to do. All of this is quite amusing, and it’s actually almost painful to watch Eichhorst’s lame and pathetic attempts at “courting” Dutch. Well, at least until he tells Dutch to take off her pants. Um, what?

But, when Eichhorst responds by telling Dutch to spread her legs and bend over, I think we all got the idea. Okaaaaaaaaaay. If you don’t have the “equipment,” then I guess you are forced to work with what you have, right? Yep, Eichhorst has no dick but he’s got that stinger — sounds like a good replacement to me. Oh. My. God. Of course, this totally effed-up strigoi “sex” would have also turned Dutch at the same time, which I guess is all part of Eichhorst’s plan. Oh yes, make his “love” one of the Master’s minions, and Eichhorst will be able to kick back with the blonde beauty any time he wants, pop open some Schnapps, and laugh about about how he twat-drank her — oh, and all over candlelight. Yes, folks, totally messed up and totally disgusting.

The only thing I can say is thank God Dutch had the forethought to steal that pepper spray off the cop Eichhorst killed at the beginning of the episode because that probably saved her life. With his eyes burning and his stinger/dick hanging out of his mouth, Eichhorst is left in the white room while Dutch manages to escape. Another major stroke of luck is that Fet, Eph, and Nora are able to locate Dutch’s position in that maze of a hotel at the very moment she escapes, and so, the only thing Eichhorst is left with on his big “date” is a silver grenade courtesy of Vasily Fet and some pretty singed hair and eyebrows.

Needless to say, this arc went in a direction that was way beyond shocking. Most, if not all, of the fandom expected Eichhorst’s motives to be that of revenge or something practical like torturing Dutch for the location of Zack. I’m sure the last thing anyone expected was for the entire plot to be driven by an 80 year-old lust for a Jewish girl that Eichhorst had loved but who he also got killed.

And, of course, discussion of this arc wouldn’t be complete without mentioning the spectacular performance of Richard Sammel. Holy crap. I called Sammel the show’s “gem” in my Thomas Eichhorst character analysis last year, and if this episode didn’t exemplify that, I don’t know what would. In many ways, Sammel had to portray 3 completely different characters in this single episode, and he did so perfectly and impeccably. The lonely, shy “Tommy Eichhorst” going on his first date. The pompous, arrogant newly-recruited officer of the Nazi party. And, of course, the cold, ruthless 2nd-in-command of the Master but with an undying lust for his “human” side that was lost almost 80 years ago. Kudos and plaudits to you, Richard Sammel. Now, can we please give the guy the Emmy already?

While Eichhorst and Dutch definitely stole the show in tonight’s episode, we also got to check in with Gus (Miguel Gomez)  which, given the guy has been MIA since his big meet-up with Quinlan (Rupert Penry-Jones)  two weeks ago, I was pretty thrilled about. We see that Gus has decided to join Quinlan in his fight, but we also learn he’s smart about it. Gus needs to make sure Aanya and her parents are able to make it safely out of the city, and so, the deal is if Quinlan and his sidekick, Eve, can make that happen, then he’s got himself his first sun-hunter. Very well-played, Gus.

The only crappy thing about all of this is while it was hinted that we might see Q in this episode, that turned out to be only a tease. Sigh. When Gus, Angel, and the Guptas arrive at the checkpoint and are waiting for their “official government papers” to arrive that will allow them to cross, we don’t get Quinlan showing up to save the day. Instead, we have to settle for Eve racing up and burning rubber at the last moment in her hot car and hot leather outfit.

A very piss-poor replacement for Quinlan in my opinion. However, the final part of the scene gives hope that we might get to see our new fan-favorite hero at least 1 more time before the end of the season. Next week’s season 2 penultimate episode is supposed to feature Q’s new sun-hunting “dream team,” and with Angel deciding to stay and join the fight too, I think Quinlan just got himself another recruit.

Oh, hell yeah! They all then get into the car and speed away, presumably to Quinlan’s batcave, wherever that may be. Fingers crossed that the next time we see this group, Quinlan will grace us with his presence.

The last thing to mention involves the Occido Lumen, with the punchline of that arc being another shocker in tonight’s episode. As we probably suspected, the guy who knocked Setrakian (David Bradley) out last week was the boy from the convent, Fonescu. That much I think we all expected. But, what we didn’t expect is the person waiting on the other side for Fonescu and who had been working for Cardinal McNamara — Alonso Creem (Jamie Hector).  The last time we saw this guy was in a negotiation with Setrakian to find the Lumen, and now, we learn he has also been working with the Cardinal (and presumably with Palmer) and playing both sides all along. Who will Creem decide to give the Lumen to in the end? Will he give it to Palmer and go to the dark side? Or, will he choose humanity and keep his word to Setrakian? With only 2 episodes left in the season, let’s hope he makes that decision very soon.