The Strain Season One Finale: “The Master” 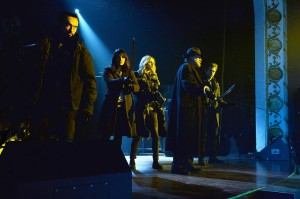 Truth be told, I’ve been a little worried over the past few weeks. There are a couple of extremely important plot points at the end of book one of The Strain trilogy and it was beginning to look like either they were not going to happen or were going to be changed dramatically. However, with tonight’s finale, not only did they play out but what the writers and producers came up with was ten times better than I could have possibly imagined, making for one of the best season finales. Ever.

Did anyone else get deja vu when Palmer (Jonathan Hyde) walked through the door of Setrakian’s (David Bradley) pawn shop in the opening scene? Honestly, I laughed out loud. The scene was a near perfect snapshot of Eichhorst (Richard Sammel) and his acolytes arriving last week. The only difference is Palmer is nothing more than an Eichhorst wannabe. He tells Mr. Fitzwilliams (Roger Cross) to pack up everything, obviously because he’s now a strigoi and wants to learn everything about the order. He even takes Setrakian’s wife’s heart. What an asshole.

Of course, his bubble is burst when Eichhorst shows up and breaks the bad news — the Master didn’t turn him but only gave him health. Given that he was on his deathbed, you would think he’d be grateful, but instead he’s just infuriated. How much more crap is the Master going to put up from this guy before he squashes him like a bug?

Palmer’s day doesn’t get much better when he gets home. Mr. Fitzwilliams has seen enough and officially gives his employer notice. Yes! Mr. Fitzwilliams is a good man, which means he is also loyal to the man who pretty much raised him but he decides he can no longer be complicit to Palmer’s crimes. This didn’t happen in the books and now I’m really wondering where the writers are going with it. Will Fitzwilliams and the rest of his security team ultimately join Setrakian in his fight?

We’ve been wondering since episode 7 who in the heck this hooded strigoi, Mr. Quinlan (Stephen McHattie), is and were even more baffled last week when his crew grabbed Gus (Miguel Gomez), threw him in an SUV and just took off.

As I said in my review of last week’s episode, Mr. Quinlan is definitely not a bad guy. But even after Quinlan unties Gus, Gus still isn’t convinced because the first thing he does is try to throw a punch. Gus, Gus, Gus. All that gets him is being thrown face-first down on the concrete floor with Quinlan keeping his composure and just responding, “Bad idea.” 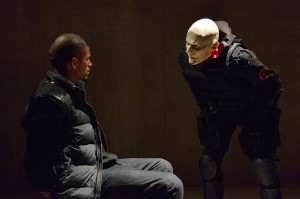 Quinlan then leads Gus into a very large room where, to Gus’ surprise, six other strigoi are perched up on pedestals almost as if on display. And when Gus looks down on the floor, there’s blood everywhere. WTF? Here Quinlan provides a very eloquent explanation:

You are standing among beings of great honor, dignity and power — the Ancients. An ancient truce has been broken. An act of war has been declared. We need a human soldier who can move freely in the daylight. Someone who can use the power of the sun to massacre the unclean — Quinlan to Gus

Apparently, the Master isn’t the only master because these Ancients are six more just like him. There is an agreement that has been in place for centuries that none of them would launch an attack against humanity and that they would cohabit in peace. However, the Master got greedy, wanted all of the power for himself and well, the rest is history.

Even after all of that, Gus still doesn’t see a reason to help — until Quinlan begins to speak Gus’ language and gives him two really good reasons to join their cause.

There is so much more to the story and this is only the tip of the iceberg. But it does give the audience a pretty good glimpse into what is really going on and it finally brings together a lot of the pieces of the puzzle that we have been given throughout the season.

However there are still lots of questions especially about Mr. Quinlan. Who exactly is he, why is he killing vampires and why does he look different from the other strigoi? Gus points out that he knows Quinlan has a stinger but he also still has his nose. Given that, is he in fact truly a strigoi in the strictest sense of the word? 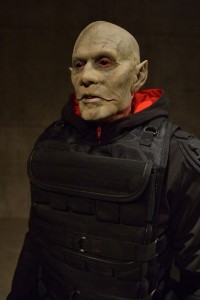 Unfortunately, none of these questions will be answered until season two but trust me when I say that it will definitely be worth the wait. Mr. Quinlan, his backstory and his relation to the Master is one of the best parts of the trilogy and you will certainly not be disappointed.

Is the Master Invincible?

You know, I’ve been wondering for weeks where in the hell Bolivar (Jack Kesy) has been. It turns out he’s been MIA because he’s been in training as one of the Master’s top-ranking vamps. Remember that massive horde of sleeping strigoi Setrakian’s crew found in “The Third Rail?” Well, on a recon mission Eph (Corey Stoll) and Vasily (Kevin Durand) discover that the theatre that Bolivar just bought, Vestry Hall, is right above it. What’s more, they find the fragments of the Master’s coffin inside which means he’s probably nearby.

This calls for a full-blown, no-holds-barred assault, which turns out to be the best scene of the entire season. It’s time to kick some Master ass. Everyone shows up for this battle including Zach (Ben Hyland), who is given his very own silver sword by Setrakian.

However, the group runs into trouble from the get-go because among other things Eichhorst is there, who we know is a lot stronger than your average strigoi. And there’s many more strigoi guarding that theatre than the team had anticipated. But still they are able to hold their ground while Eph and Setrakian go upstairs to find the Master. The Master is there alright but things don’t go as planned. This vamp is just too big and strong and quickly overpowers Setrakian, knocking him to the floor and causing him to drop his sword. So Eph does the only thing he can think of and starts breaking windows to let the sunlight in. 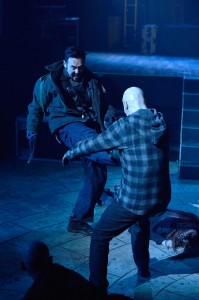 The Master screams in pain but to everyone’s astonishment it’s not having the impact they had expected. Setrakian is finally able to push the Master out the window onto the balcony and in direct sunlight. If this happened to any other strigoi, the vamp would contort in pain for a couple of seconds but then be dead. But the Master is not your typical strigoi and while it’s clear the light is burning him and severely, he doesn’t perish and instead crawls down the side of the building and disappears. Yes, crawls down the freakin’ building.

What. The. Hell. What the hell! And everyone on Setrakian’s team says the same thing. Sunlight is supposed to be fatal to these things and so, why didn’t the Master die? And as Eph put it, if sunlight doesn’t kill him, what will?

This is one of the plot points that I was talking about at the beginning of my review. Even though the Master isn’t killed, he’s severely burned and injured which actually propels the story forward and is, in fact, related to one of the final scenes at Dr. Goodweather’s house. Eph and Zach end up making a pit stop at the house and while they are there, guess who shows up looking for her loved one? Yep, Kelly Goodweather (Natalie Brown). As painful as it is and while holding back a screaming Zach, Eph does try to kill Kelly but is unsuccessful. This runs her off but interestingly enough, she had no reinforcements. What’s up with that?

Make no mistake though, she’ll be back, and I don’t believe it’s for the reason that most people may think. Kelly waited until now to track down Zach but why? There’s actually a really good reason for that, again related to what went down with the Master earlier that night. Unfortunately, we’re going to have to wait until season two to find out, but just like the Quinlan story line, trust me when I say it’s worth it.

All in all, an excellent A+ episode and one of the best season finales I’ve seen in a long time, marking the end to an already fantastic season. As most people know, I’ve read the books and love them. Carlton Cuse and the show’s team of writers were able to take some already exceptional source material, pull out the very best parts and somehow make them better. Mr. Quinlan is such a major player in the trilogy and moving up his introduction was such a great move. And, having Mr. Fitzwilliams ditch Palmer was just genius because now it opens so many doors plot-wise going into season two. And I would like to point out that such a superb finale was pulled off without killing a single major character. The writing, the choreography, the make-up, the action scenes, all of this is what made the finale so good and so memorable, not some shocking death scene. Bravo to Carlton Cuse, Guillermo del Toro, the writers, the cast and everyone else who worked on the show this season.

The episode ends on a very somber note. On all accounts everything seems to have blown to hell and Setrakian’s crew is down, depressed and very disillusioned. For those who have been keeping count, less than 5 days have elapsed since that airplane landed at JFK in the pilot. Only 5 days. And if the Master can wreak this much havoc in that short period of time, where will we be in another week? Season one ends with a very good quote by Setrakian that I think sums everything up: 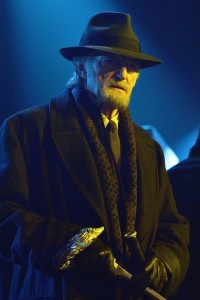 Too long I’ve lived. Too much I’ve seen. This planet — our host — once so wild and unknown. We’ve mapped it, paved it, arranged it on a grid, never imagining that something else was watching, a creature more ruthless than we are, eager to exploit the very infrastructure we so obligingly arranged. Is the war already lost? Are we destined to be cattle for monsters? Or, now that the enemy has finally shown his face, do we have a fighting chance? The world today is not what it once was one week ago. What will it be one week from now? One month from now? Nothing is written that cannot be changed. It is a small world after all. We made it that way — Abraham Setrakian

The war continues when The Strain  returns for season two in the summer of 2015.