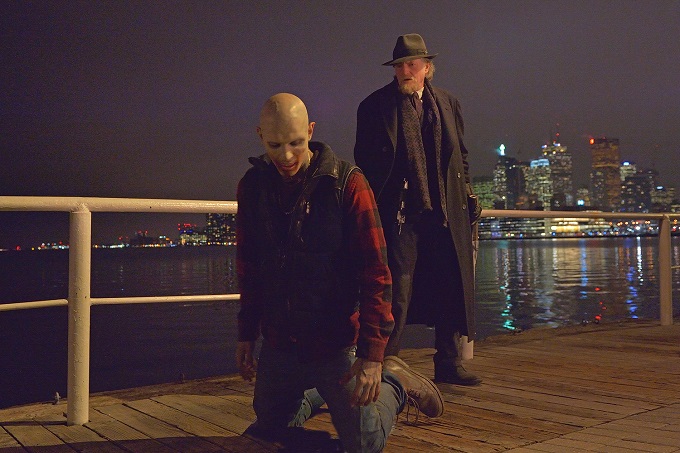 Oh, yes, they did, folks! We had our first character death of the season tonight in the shocking final moments of the episode. But, before diving into that humdinger, let’s discuss a couple of other surprising turn of events, as this eppy was packed full of them. Deep breath, everyone. Here we go.

HOLY SMOKES — WE HAVE A STRIGOI “PLAGUE”

As much as I was excited about the possibility of Eph (Corey Stoll)  and Nora (Mia Maestro)  finding a biological weapon to combat the strigoi pathogen, I was also cautiously optimistic. After all, this entire storyline is completely absent in the trilogy, and so, it makes you wonder how much they can realistically explore this without significantly altering the overall plot and the story’s “endgame.” But all things seem to indicate that they pulled it off — at least for now.

The initial batch of the strigoi death juice doesn’t quite do the trick, and their first test subject, Mrs. McGeever, dies very quickly. It seems the drug is a little too potent, and so it’s on to round #2. Fortunately, Drs. Goodweather and Martinez still have 1 test subject left, and after tweaking the cocktail, it seems they might have hit the bull’s eye this time. Mr. McGeever doesn’t die, becomes relatively docile, and other physical changes are apparent like the swelling in the neck subsiding. Holy sh*t, I think they might have a winner winner, chicken dinner! 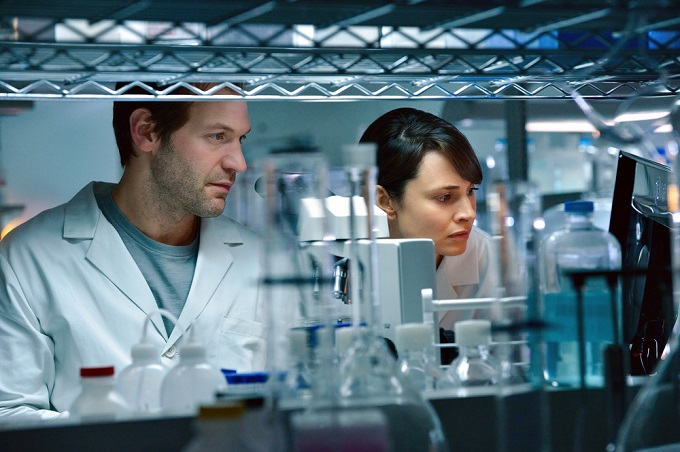 However, as the ending of the episode hints, even though Eph and Nora may have cooked up a strigoi “plague,” they still may be heading for trouble. The turned Mr. McGeever may be calm and no longer violent, but his eyes fixates not on Ephraim but on Zach (Max Charles). We know the Master is obsessed with Zach for some reason, but what about the rest of Eph’s friends? If the Master can see everything through the eyes of his strigoi, it stands to reason that he’s seen what Eph and Nora have been doing, and I really don’t think the Master will just sit back and let their plan of wiping out his hive unfold.

My guess? There will likely be some offensive attack by the Master and some his followers. We will have to wait and see, but it all begins next week. They are releasing Mr. McGeever, and so, we will probably find out soon enough how effective this strigoi virus is, and what the Master may ultimately do about it.

ABRAHAM, PALMER, AND THEIR “VAMPIRE VIAGRA”

Palmer, you may be feeling like a million bucks and think you have won something by the Master giving you his secret strigoi “vampire viagra,” but as it turns out, the Master has gotten the wool pulled over your eyes. If you had actually been smart and not alienated Setrakian, you would have known that there’s nothing special or exclusive about it. Just some common strigoi bloodworms, a bunsen burner, and an eye-dropper, and you’re good to go.

Yes, folks, after feeling the frustration from his old eyes, his aching joints, and his diseased heart, our Abraham (David Bradley) decides to go to extreme measures to re-capture some of his youth, which seems may be required if there is any hope to his finding the answer to taking down the Master. However, given the fact that the bloodworm concoction stops Setrakian’s heart forcing poor Nora to have to revive him, I’m thinking this may be a tad-bit over-the-top. I also question how many more times Abe can survive doing this to himself — probably not many.

So, Abraham? Go easy on the strigoi fountain of youth! 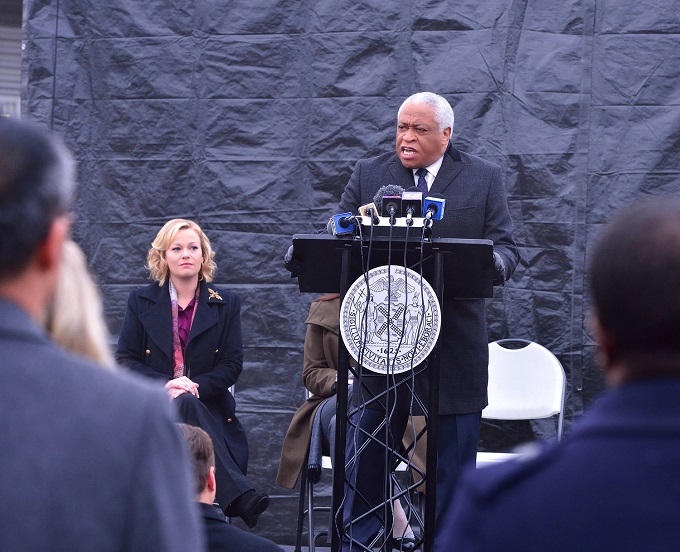 Besides this, one other development worth mentioning. Councilwoman Justine Feraldo (Samantha Mathis)  definitely wasn’t kidding last week with her promises because tonight she announces that Staten Island is officially a plague-free zone. Damn, that woman is efficient — and, she’s got guts too. A display of decapitated and executed strigoi? The woman’s got balls, that’s for sure! Oh, and Mr. Fitzwilliams (Roger Cross)  is back with Kevin Hanchard (“Orphan Black”)  coming on as his brother Curtis. And, he’s on Staten Island! Yay. Let’s just hope all the goods he’s got on Palmer and his dealings with the Master will prove to be useful later on.

Now, on to the real crux of tonight’s episode…

A TEARFUL GOOD-BYE TO QUINLAN (I MEAN “VAUN”!) AND HIS SWAT TEAM

Truth be told, I screened this episode over 2 weeks ago, and after my initial watch, I was madder than a red-ass dog. I cussed like a sailor. I threw things at the television. Basically had the mother of all hissy fits. Then, I cried my eyes out like a teenage girl. I had known since late last year after a pre-season 2 interview had been published by Spoiler TV that they were going to re-invent the Quinlan character, and that the “real” Q wouldn’t be revealed until around mid-season. I didn’t like it, but it’s something I accepted. However, even in my wildest dreams, I never thought they’d pull the humdinger that went down tonight. I mean, it’s one thing to decide on a “do-over” for a character, but it’s another to come in, guns-a-blazing and completely erase him (and, I do believe “erase” is an appropriate term here since if you think about it, that’s what’s been done). Even still, it’s been 2 weeks since I saw the episode for the first time, I’ve calmed down, and so, here is my more objective opinion on the surprising Quinlan/Vaun twist.

Let’s first discuss the positive side. First, that opening training sequence with Gus (Miguel Gomez) and Vaun (Stephen McHattie)  — Oh my freakin’ God, wasn’t that just fantastic! Vaun giving Gus a gun with only 2 bullets and thus, forcing him to fight a strigoi hand-to-hand. Absolutely hilarious, and both actors nailed it. In my opinion, that will likely end up being one of the most memorable scenes of the season.

Second, the deaths of Vaun and his crew told us volumes about Eldritch Palmer (Jonathan Hyde)  and made it very clear that he’s not the dumb, pompous schmuck that most of us thought. Even though Vaun had been training Gus to fight strigoi, it turns out the training was for a mission to kidnap Eldritch Palmer. It seems that Vaun (and probably the Ancients) finally got the memo that Palmer was at the center of the Master’s plan, and so, if they could take the billionaire out of commission, perhaps that would thwart those plans or at least create a good speed bump or two. Sounds like it could have worked, had it not being for Palmer going on the defensive and creating a very elaborate and sophisticated U/V light “strigoi trap.” As soon as Gus, Vaun, and his team had gotten to the penthouse and it was completely deserted, that should have been a major clue to get the hell out of dodge. But, they hesitated, and that ended up costing Vaun and his crew their lives. Boom, then comes on a very well-orchestrated series of U/V lights, the first ones on the ceiling designed to blind and burn Vaun and his crew’s faces, thus forcing them to the center of the room. Then, the “death blow” is activated with the floor being pulled down, creating a horrific pit where they are trapped and burned alive. And, Gus can’t do a damn thing but watch.

Vaun, give me your hand. I can shield you from the light — Gus

This was awful, horrific, gut-wrenching, and about another dozen other negative adjectives. But, then again, it was some great character development for Palmer, and it makes me wonder what else he’s got planned. Also, keep in mind that Bolivar (Jack Kesy)  is likely still in the next room as we never saw him leave, and I’m very curious what he may think to find 5 cooked strigoi in Palmer’s great room. 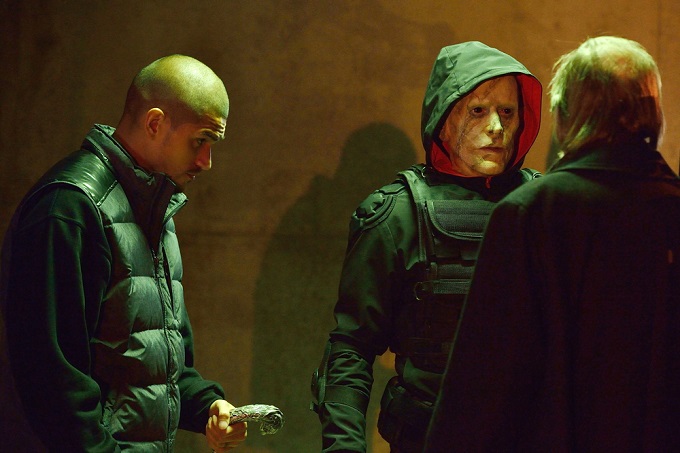 Now, for the negatives. While the hooded strigoi’s name was never said onscreen last season, the Executive Producers did reveal last year to the media that the character was, indeed, the very famous hybrid vampire hunter from the trilogy known as Mr. Quinlan AKA “The Born.” Even if you are completely unfamiliar with the books, by the end of the first season, you knew who Mr. Quinlan was. And, the fans absolutely loved him! I spend a great deal of time on social media, especially Twitter, and I remember being so delighted with the positive fan response to the hooded Quinlan and his vampire SWAT team. This being said, once it was decided that the Quinlan character was going to be re-invented, I think it’s ground that the writers really should have treaded very carefully. But, did they? Obviously not. In just 3 short episodes, not only is it made very loud and very clear that Quinlan is not Quinlan but Vaun, the character and his entire crew are gone and up in smoke (literally!). Effectively “erased.” Out-of-sight, out-of-mind. Very, very un-cool. If that’s not the biggest kick in the pants to the fans, I don’t know what is.

If the writers were really dead-set on doing this, I personally would have taken a middle ground. Turn Quinlan into Vaun, but have him work with the real Mr. Quinlan (who, by the way, will be revealed in episode 2.07). To me, that would have been the best of both worlds. The writers would get their new-and-improved Quinlan, but the fans would still get to keep in some capacity the lovable hooded vampire hunter who seemed to have a softer, “human” side as we saw with the Luss children last season. But, to kill him off and in such a horrific fashion? Hell, freakin’, no way!

But, what’s done is done. Now, we can only move forward. And, we can only hope that the new Quinlan will be a wonderful bunch of awesomeness, and that all of this crap didn’t happen all in vain. So, what’s next for Gus? Will he still be working with the Ancients, and if so, how given that Vaun and his group of soldiers have been wiped out? Well, that’s where the real Mr. Quinlan will come in. I was at San Diego Comic-con a couple of weeks ago, and I was fortunate enough to have been able to speak with both Miguel Gomez on what the future holds for Gus as well as Executive Producer Chuck Hogan on what we can expect mid-season with the new Quinlan. Check out the below video interviews (and yes, that’s me laughing with Miguel as I mention in passing tonight’s shocking episode, both of us knowing we couldn’t reveal on camera the shocker that was a-coming!):