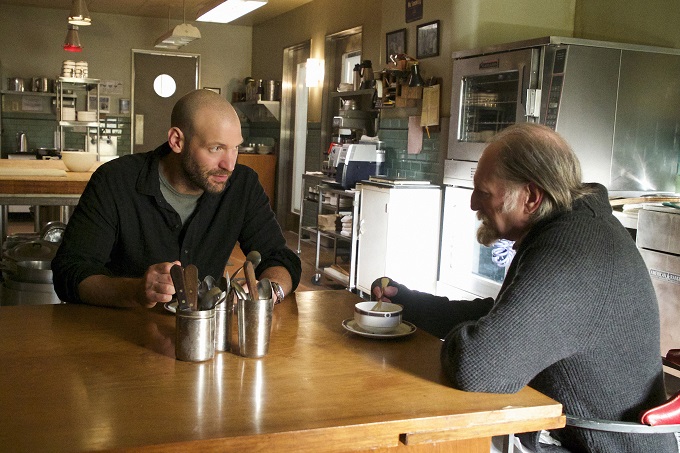 In last week’s fantastic season 3 premiere of The Strain, it ended with a scene that pretty much laid the groundwork for the next few episodes — the Master’s attempt at strong-arming Eph (Corey Stoll)  into giving him the Lumen by offering up Zack (Max Charles).  As we know, Dr. Goodweather is in a very dark place now. In just 23 short days, he has lost Kelly. He has lost Nora. And, now, there’s a good chance he may also lose his son. He’s very close to hitting rock-bottom, and so, if there’s any chance — no matter how remote — of getting his son back, you just know he’s going to take it. But, before we get to that, we get to check-in with 2 characters that were MIA last week — Dutch (Ruta Gedmintas)  and Palmer (Jonathan Hyde).

Dutch annoyed the hell out of me last season, and that feeling continues as we head into Sunday’s episode. First, she was with our group starting in season 1, and then, she was off playing house with Nikki. That didn’t work out, and so, she was back with our group. Now, it seems she’s taken off again, but this time, she’s crawled back to her old group of hacker friends. WTH? What. The. Hell! Can this girl be more bipolar? Geez, Louise. To top it off, her hacker buddies haven’t been hanging with expert strigoi hunters, like Fet and Setrakian, to teach them how to fight and defend themselves against these things, and so, they quickly become liabilities. You probably can guess how this is all going to end. 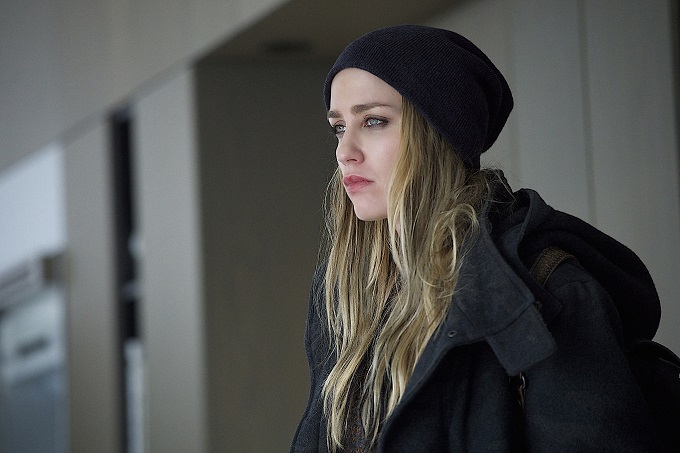 The thing about hackers is that they tend to be quite selfish and self-centered. While they often boast that it’s all about admirable ideals like taking down big, evil corporations, a good deal of the time it’s more about the rush. And, unfortunately, the quest for that rush often outweighs any perceived risk. Well, that may be fine in a hacker’s world, but in a vampire apocalypse, too much risk can cost you your life. This is exactly what Dutch tells her former hacker buddies when they want to loot a luxury skyscraper.

You remember you and I used to talk about breaking the boundaries between the have’s and the have not’s. It’s happening, Dutch. The whole city is pressing a restart button — Braden

Are you bloody kidding me, Braden? Yeah, we used to talk a lot of shit about changing the world, but what did we really accomplish? We screwed up the computers of a few unscrupulous companies. Yeah, big wins! That is nothing compared to what is happening now, nothing. There is no restart button. The entire human race is circling the drain. This isn’t the beginning of anything, except maybe the end — Dutch

As would be expected, this idiot group ends up acting about as stupid as they talk and look. One of the goobers demonstrates being the moron-of-the-century by looking under a bed. Why, oh why, would you do that?! Open the blinds, let the sunlight in, and then, you can guarantee any hiding strigoi will **never** come out. Plus, these things have 6-foot stingers. Stick your head under a bed, and if one’s under there, he’s got you! Of course, that’s exactly what happens. Sigh. #FacePalm

To top it off, when the shit finally hits the fan, those ass-wipes scuttle out of there, leaving Dutch to fight the strigoi they awoke all by herself. Some friends. The only upside to all of this is that jerk, Braden (guest-star Christopher Jacot), is infected, and Dutch gets the do the honors and behead the SOB. This is a bad day for Dutch, needless to say, but it’s also a very hard lesson — and one that she needed to learn. She clearly knows who her true friends are now, and I think it’s time to go home. And, this time, stay there!

Now, on to Palmer. To be blunt, this guy has crashed and burned. Due to his betrayal and the Master losing the Lumen, Palmer not only has Coco taken away from him but also his health. The white is close to wearing off, and Palmer is back to being almost as sickly as we remember him in season 1. Of course, as would be expected, the Master refuses to help Palmer any further until he proves his loyalty. But, there’s no time, and he has to come up with a Plan B. He knows how old Abraham is and is fully aware that the Professor has created some method of refining the strigoi’s white blood to take advantage of its healing powers. Using his vast financial resources, he creates a facility with a full research team working around the clock to try and unlock the white’s curative formula.

Of course, as would be expected, they fail. Under the ruse of Palmer’s Freedom Centers, the doctors have been recruiting unsuspecting “guinea pigs” for their experiments. Extremely unethical, but I’m sure Palmer is paying them all very well. However, when the latest experiment goes terribly wrong and ends with an elderly patient with a bullet in her brain, the lead doctor finally tells Palmer to shove it. Now, Eldridge has no choice. Pretending to be the original owner of the Lumen, Rudyard Fonescu, he lures Abraham (David Bradley) out and makes him an offer. He will completely remove himself from the game — in fact, leave New York City altogether — for only 1 small thing and that’s the recipe for the white. He then extends his hand to seal the deal, clearly projecting himself as the billionaire who is used to always getting his way. And, what do you think Abraham’s response is?

You can go to hell, Eldridge, where you belong — Abraham

Of course, if you paid close attention to the season 2 trailer released after last week’s premiere, you know that the scene showing Palmer with bloody eyes indicates that ultimately he is successful. But, for now, he’ll just have to wait, at least until Setrakian needs him just as much as Palmer needs the Professor.

Fortunately, these 2 storylines don’t occupy too much of the episode, and we finally circle back to the main arc — Eph seriously considering the Master’s offer and taking steps to obtain the Lumen. So, using Nora’s death as a cover story to visit Setrakian and Fet (Kevin Durand) at Quinlan’s place (VERY cheap tactic, I might add), Eph begins his plotting. Of course, Quinlan (Rupert Penry-Jones) and Dr. Goodweather have never met before, and so, when Eph fires a shot at what he thinks is a strigoi, that only lands Dr. Goodweather on the floor in a choke-hold.

What is this thing? – Dr. Goodweather to Fet (looking towards Quinlan)

It’s a long story but a good story — Fet to Dr. Goodweather

Wait, did we actually hear Fet defend Quinlan? A “good story”? Oh, yes, Vasily losing all of his SEAL’s right after Quinlan warned it would happen I’m sure has been quite humbling.

Eph then continues on with his charade and tells Fet and Setrakian the sad story of Nora’s demise. This visibly distraughts the Professor, partly because he really liked Dr. Martinez and partly because he now knows the Master has a bigger plan since Kelly (Natalie Brown)  didn’t turn Zack (Max Charles).

To Eph’s credit, he doesn’t immediately show his hand. He does listen (well, kind of) to Setrakian’s argument that they should continue working towards deciphering the Lumen, as the Professor is certain it holds the key to the Master’s demise. But, the more Eph hears, the more he believes that the book is nothing more than a collection of riddles, and trying to find a solution in that is pointless.

For example, when the face of God shineth upon him, his essence is destroyed — Abraham

Good. All we need to do is find the face of God — Dr. Goodweather

Well, Abe and Fet may have fallen for Eph’s little ruse, but Quinlan immediately sees right through it. It it here we get some of the best scenes of the entire episode. Fet and Setrakian know Dr. Goodweather, they are his friends, and it wouldn’t occur to them that Eph would seek them out for the sole purpose of betraying them. But, Quinlan just met Eph and is immediately suspicious. Why wait a full week to share the tragic news of Nora’s death and his son’s abduction?

Dr. Goodweather dodges the question and turns it all back on Quinlan, being about as mean-spirited as Fet was to Q last week.

Strigoi don’t have plumbing for procreation. So, did you Mom go to a fertility clinic for the undead? — Eph to Quinlan

Do you get pleasure trying to bait me, or are you trying to distract me from your true purpose? I’ve lived a long time, Doctor. I saw Emperor Domition slain by his own court. I witnessed Giuliano de Medici murdered during Easter services, and I watched the Borgias strangle their own. Over the centuries I’ve developed a keen sense of treachery, so I must wonder what’s the real reason you’re here — Quinlan to Eph

It’s funny. I was wondering the same thing about you — Eph to Quinlan

The last sentence actually turns out to be Dr. Goodweather’s saving grace. You know, it’s actually quite ironic. Eph had originally gone there to try and convince Setrakian to help him use the Lumen to get Zack back, and if that didn’t work, his backup plan was to simply steal it. Little did Eph know that the half-breed that he has continually poked fun at since he walked through the door would be the one who would understand his problem and who would ultimately offer to help him get his son back.

Yes, even though Quinlan may be only half-human, there are 2 things he understands very well: 1) The bond between a parent and his/her child. 2) The neverending lust for revenge (we will learn very soon why these are so important to Quinlan). So, by the end of the hour, Dr. Goodweather and Quinlan will have forged a very unlikely alliance and hatch their own plan for saving the world and getting Ephraim’s son back.

Just like last week’s premiere, another solid episode. Very fast-paced, very to-the-point. And, even though you may not know it yet, tonight’s installment laid the crucial groundwork for next week’s game-changing episode titled “First Born.” What’s more, it forged a partnership between Dr. Goodweather and Quinlan — one that while unexpected, is quite intriguing, and I look forward to seeing where it goes. And, of course, as always, Rupert Penry-Jones stole the show in his portrayal of Mr. Quinlan. The only detail that I found quite annoying is the same thing that bothered me last week — the inclusion of a single scene that just didn’t belong. Why, oh why, did someone think showing Fet having a one-night stand would be a good thing? (well, I’m betting it’ll be a one-night stand) Was it to simply show us Fet’s fixation on Nora because of Kate’s strong resemblance? Regardless of the reasons, the scene stuck out like a sore thumb and did nothing more than serve as a very unwelcome distraction from the main storyline.

Even so, it’s forgivable. Tonight’s episode set the stage for something so big, so unexpected that after next week, none of us will remember these little hiccups and annoyances. One week, folks. Just one week. So, brace yourselves…