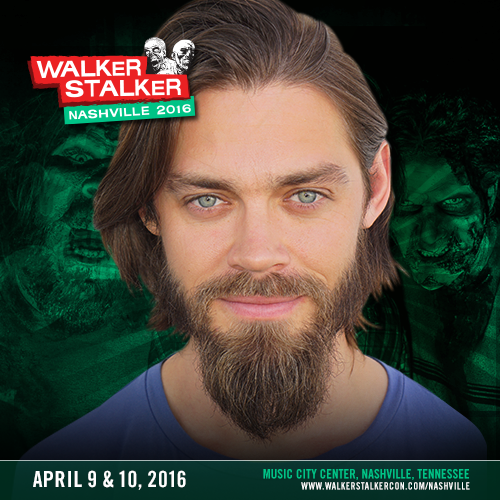 Okay, folks, season 6 of The Walking Dead may be a wrap, but that doesn’t mean the fun is all over until the series returns in October. In fact, just one week after that shocking finale, fans will continue their celebration this weekend with Walker Stalker Con Nashville. All sorts of undead creatures will be on display, along with the survivors who fight for their lives, and celebrity guests from the popular zombie drama will be in attendance for autograph signings, photo ops and convention panels throughout the weekend.

I have attended this convention in the past, but this one is especially pivotal as it’s the first one that will feature several new characters that were introduced in season 6. Austin Amelio (“Dwight”) and Alicia Witt (“Paula”) are set to attend and will be hosting their own panel on The Saviors Saturday afternoon. And, Tom Payne (“Jesus”) will be making his very first convention appearance and answering fans’ question at his Jesus Panel on Sunday.

Besides The Walking Dead, other horror films and TV series will also be featured, including A Nightmare on Elm Street, Friday the 13th, Z Nation, Night of the Living Dead, Breaking Bad, Gotham, Bates Motel, American Horror Story, Fear the Walking Dead and more. Below are just some of the guests scheduled to attend:

I will be onsite all weekend, attending most of the panels and talking to several of the guests. So, if you aren’t fortunate enough to attend the event yourself, you can follow me on Twitter @MaryTheGeek for live-tweeting of the panels and just to follow all of the Walker Stalker fun and craziness.