To The Fans Of “The Strain”: Co-Creator And EP Chuck Hogan On Vaun, Quinlan, And What’s To Come [Exclusive] 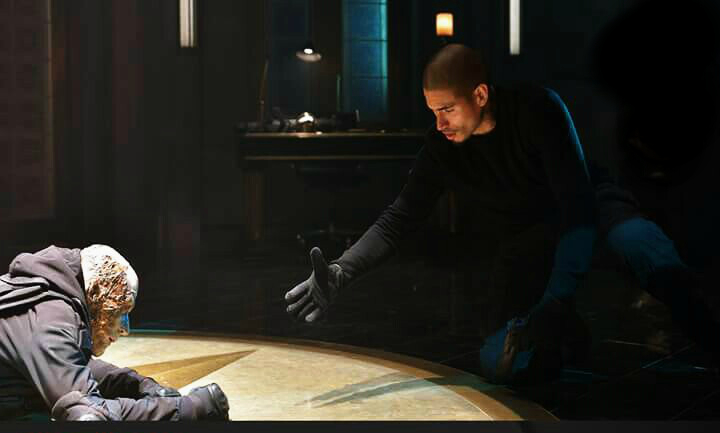 For a good deal of The Strain fandom, especially those devoted to Vaun and his vampire SWAT team, last week’s episode was a tough pill to swallow. Unless you live in a cave, without Internet, without social media, you may have felt the Earth rumble a bit in the final moments of Sunday’s episode. That would have been fans all across the country screaming with horror as Vaun and his entire crew are left burning at the bottom of Palmer’s sunroom deathtrap in a botched plan to kidnap the billionaire.

And, for some, it may have been worse. The writers decided sometime last year that the hooded strigoi we were told was the key character from the book trilogy, Mr. Quinlan, was going to get a “do-over,” and the real Quinlan wouldn’t be showing up until sometime later in season 2. This was made perfectly clear in the season 2 premiere when the hooded fan favorite very loudly announced himself as “Vaun,” but some missed that memo. So, when it came time for that horrific death scene, many viewers thought they had just killed off perhaps the biggest character in the trilogy, Mr. Quinlan.

Needless to say, fans everywhere were confused, upset, and some just mad as f*cking hell (hey, I was one of them for a while!). As I was reading fan reactions to the shocking turn of events, the one question that kept coming up over and over and over again was “Why?” We see characters being recast or take totally different directions as they are developed over time, but what we had here was something completely different. The Vaun/Quinlan switcharoo amounted to a complete 100% character reboot, which honestly I haven’t seen on this scale ever. Fans wanted to know why, what reason could be so big as to completely dump a fan favorite and rush him to his death in just 3 short episodes.

Well, that’s a nagging question I had myself, and so, I decided to reach out to the network to try and get an explanation — ANY explanation — for the fans. I sent 3 key questions, and to my utter surprise, Co-Creator and Executive Producer Chuck Hogan replied. I met Chuck for the first time last year at San Diego Comic-Con, and he always struck me as a super-nice guy and one very passionate about his work. Answering these questions I think is a big testament to that. So, thank you Mr. Hogan.

TV GEEK TALK: Can you offer a reason as to why this decision was made? I (and the fans) understand that changes often do occur in a show’s sophomore season — for example, the recasting of the Zach Goodweather character. Things like that are not uncommon, but completely redoing a character from start to finish? That’s pretty extreme. I think the fans are looking for something — **anything** — that could explain and make them understand why such a drastic action was taken.

Chuck Hogan: “The character was originally assumed by all of us (Guillermo del Toro, Carlton Cuse, myself, the other writer/producers, and FX) to become the “sun hunter” Quinlan from the Strain novels.  But as we were charting out Season Two, we all began to see a missed opportunity in our introduction to the character.  We felt strongly enough to take action in the story, and unfortunately that meant losing Stephen McHattie, who was not only a fan favorite but one of our favorites as well.” 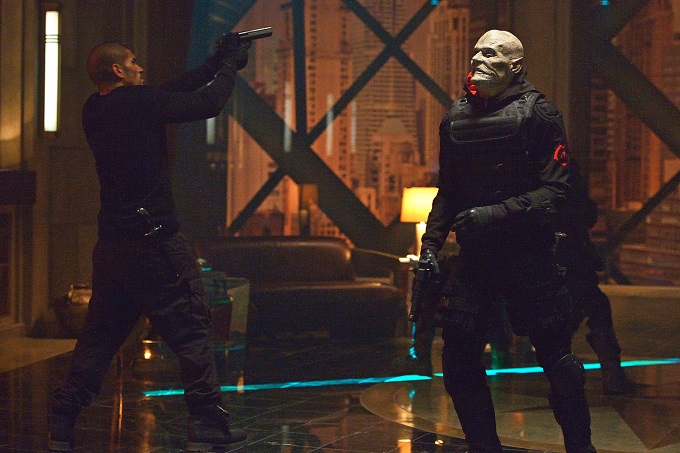 Okay, first, kudos and plaudits for their finally admitting the character was, indeed, supposed to be Quinlan, and that the fans haven’t been delusional and hallucinating since last summer. Score! This also shines some light onto the reason for the decision. It sounds like someone got this amazing idea for how Quinlan could be introduced into the story, but unfortunately, that ship had sailed, and you can’t go back and do introductions again. Thus, the decision for the “do-over.”

Now, I know that may not seem like a consolation now, but keep in mind we haven’t seen the introduction of the new Quinlan yet. If this is any indication and given the gigantic hoops the writers have jumped through to get to this point, I fully expect something **huge** coming our way in a few weeks. Will it be able to top the very dramatic entrance of Vaun/Quinlan with the saving of the Luss children in the season 1 episode “For Services Rendered”? That, of course, remains to be seen, but my gut says it will, and in a major way.

TV GEEK TALK: “Can you also offer a reason as to why the extra step was taken of actually killing off Vaun and his entire crew, and so very quickly? One thing I did notice was for the fans who got the memo that Quinlan was actually Vaun, they became somewhat OK with it. But, that was because they were looking forward to, and hoping, that Vaun would be working closely with the real Quinlan. It didn’t dawn on most of them that Vaun may get killed off. And, then not only did we lose Vaun in Sunday’s episode, we also lost every last one of the sun hunters all in one big swoop.”

Chuck Hogan: “We thought long and hard about how the actual Quinlan should be introduced and what Vaun’s potential role might be in regards to this character.  Multiple factors go into every story decision, but we felt strongly that it is critical for his character that Quinlan be a renegade going ahead.  It made sense as well for Gus to learn a lot from Vaun, but then to be cut free and left to his own devices.  Sometimes the greatest gift you can give to a character is a shocking and memorable sendoff, painful though that can be for the viewer and the creators.  In the end we felt that half-measures wouldn’t do us — or the story — any favors.” 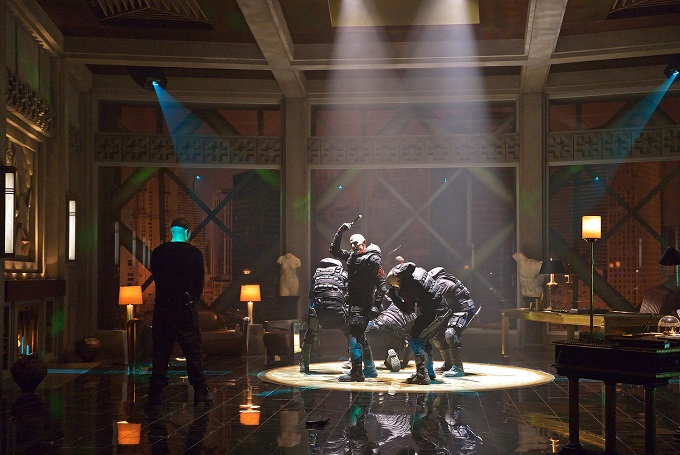 Chuck’s comment here actually made me remember something I had forgotten about the Quinlan character from the books. With Quinlan being the half-breed son of the Master, he was disgusted by his father’s actions, and truly became a renegade, a rebel, a traitor to his strigoi heritage. And, his father retaliated by killing Quinlan’s wife and adopted daughter, thus causing him to be consumed with revenge. This hatred and obsession has been brewing for over a century, and so, should we thus expect a tougher or more hardened Quinlan when he is finally introduced? I definitely think it’s a possiblity.

The part of Chuck’s answer, however, that really resonated with me was the last couple of sentences. I don’t think there was a single fan who wasn’t in shock and completely horrified with Vaun’s death scene, but you know what else? I seriously doubt that scene will ever be forgotten. Think about it. All other characters up to this point have been given boring, ordinary deaths — a bullet in the brain , being decapitated, same-old, same-old. B.O.R.I.N.G. Vaun’s death tops all of those 100 times over, and I can’t imagine it being beat anytime soon. In a sense, this was a way of immortalizing Vaun.

I actually thought of a pretty good analogy yesterday. A show of hands — how many of you watch The Walking Dead or read the comics? Well, in the comics, there’s a super-villain by the name of Negan who ultimately kills one of the most beloved characters, Glenn Rhee, and in the most horrific way. Negan bashes Glenn’s head in with his barb-wire wrapped baseball bat (which he calls “Lucille”), as Glenn cries out for his pregnant wife, Maggie. Hands-down, this is the worse death scene in the entire comic book series, and if you don’t read the comics, it has been splashed around the Internet enough to where most know about it. Most believe Glenn won’t get that death in the TV series because there would no longer be an element o surprise, so the question is who will. Do you know how most people respond to that question? That a death that big, that memorable would have to go to “a character that was equally significant and worthy of such a monumental death.” As someone once said, a character has to **earn** a death of that magnitude.

Now, for the final question…

TV GEEK TALK: Without any spoilers, of course, what can you say about the new Quinlan? What teasers can you provide about the character to get the fans really excited?

Chuck Hogan: “All I will say about Quinlan is that we are very, very excited about the direction the character is going in, and the actor who plays him.  I’d like to let the rest unfold over the course of Season Two.  Of course, we hope viewers agree with our decision and our strategy, but at the end of the day we feel very confident that this was the right move for the show.  Let’s revisit this ahead of the final episode this season, and see what you and your readers think by then.”

This goes back to what I said earlier — we can’t make a judgement yet, because we haven’t seen the introduction of the new Quinlan yet, and so, what they have planned for the character and the rest of the season is just speculation at this point. Now, this doesn’t mean we shouldn’t feel sad over losing Vaun or even be outright mad. But, I also think we should push forward and see what wonderful things the writers of the show have put together for us. I think most of us got that glimpse in the season 2 trailer of the character most think is the new Quinlan, right? He looked pretty awesome, you have to admit!

And, as Chuck said — if you get to the final episode of the season and you still think the whole thing sucks, then perhaps we should talk again.

In the meantime, Vaun will remain alive on all the forums, on all the social media, and most of all, in the very heart of The Strain fandom. Vaun, you RULE, and will never be forgotten.

I also had the chance to talk briefly with Chuck Hogan at San Diego Comic-Con a few weeks and asked him specifically about the Quinlan character. While he could say very little at the time because the season 2 premiere hadn’t even aired yet, he did say Quinlan would be working closely with Gus just like in the books. And, he also laughed as he talked about Gus and Quinlan’s relationship, indicating to me that we may get a lot of the comical banter between the two as we did between Gus and Vaun. Check out the below video interview: