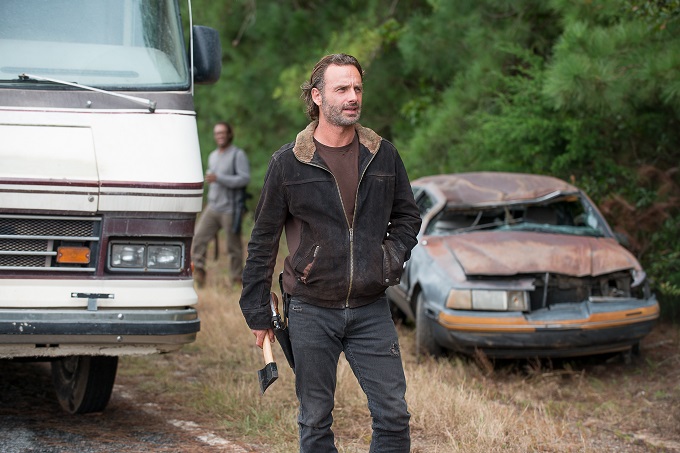 For those viewers not familiar with the comics, you may have thought Rick (Andrew Lincoln)  and Daryl’s (Norman Reedus)  decision to blindly attack Negan and the Saviors in an effort to forge an alliance with the Hilltop was a great idea. After all, the Hilltop Colony have been giving Negan more than half their food and supplies for no telling how long, and since Alexandria desperately needs those same items, it’s a no-brainer that the Saviors would have to be neutralized. Plus, as Daryl said himself, he took out a whole group of Saviors without any trouble at all, and so, how hard could it be? Um, well, if you’ve read the comics, you know it’s not likely going to be that simple. In fact, Rick and Co. find out the painful and hard way in tonight’s episode that Negan and his crew are much more than some schoolyard bullies, and unfortunately, the price is pretty steep for their poor planning and rash decisions.

Even with the ending of Carol and Maggie being captured by the Saviors, there were several other hints or “Easter eggs” throughout the episode that things may get far worse before they get better. Here are my top 5: 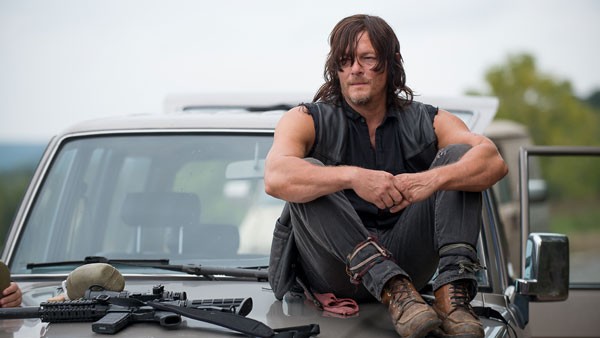 That Savior barreling out of the compound at the end of the episode on a motorcycle may have happened so fast that you might have missed Daryl yelling, “Hey, where’d you get that bike!” Well, I caught it which means the motorcycle is likely the one stolen back earlier in the season in “Always Accountable.” But, that’s actually a small detail. The big conclusion you can draw is the guy, Dwight, and his girl, Honey, who stole it are probably back at the compound and with the Saviors.

Notice I said “back with the Saviors.” If you hadn’t made the connection, Dwight and Honey were also members of the Saviors but who decided they wanted to get out from under Negan’s rule and leave the group. Well, that’s not something you can do with the Saviors, and so, they were being hunted which is the only reason why Dwight stole Daryl’s bike and crossbow. They were on the run and had no weapons nor transportation, so robbing Daryl was done out of necessity.

Well, if the Saviors have the stolen motorcycle, that likely means they recaptured Dwight and Honey, and if you’re a comic-book reader, you can probably guess the state Dwight will be in the next time we see him. However, there’s one other detail that I’m particularly worried about — Daryl told Dwight about Alexandria and even tried to recruit him. So, if Dwight knows, you can be sure that Negan now knows as well. Uh, oh. 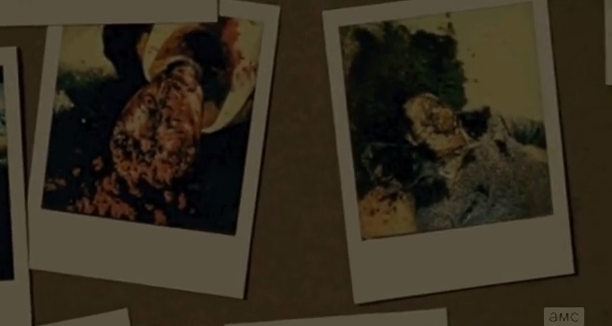 It was terrible enough to have to watch Glenn (Steven Yeun) make his first human kill, but the real horror was what happened next. Above the bunk of the guy Glenn had just killed was a whole slew of Polaroids depicting people who appeared to have gotten their skulls bashed in. To the average viewer, this may have just been a testament of the monsters Negan and these Saviors really were — but, for the comic-book fan, I bet it sent chills down your spine because it made pretty clear what was coming and who was likely going to get it.

Some of you may have heard about Negan and his “sweet Lucille,” and if you haven’t been spoiled yet, I will say that Lucille isn’t one of Negan’s girlfriends. In fact, Lucille isn’t even a person, but Negan’s weapon of choice — a baseball bat wrapped in barb-wire that he likes to use to bludgeon people to death, usually as a message to the victim’s group. Also in the comics, poor Glenn is killed in this fashion, and while there is still a lot of contention in the fandom on whom will get the famous Lucille death, this scene makes it much more likely that Glenn will draw the short straw and get his comic-book death.

THE SAVIORS LET TARA AND HEATH LEAVE — AND WITH A CAR! 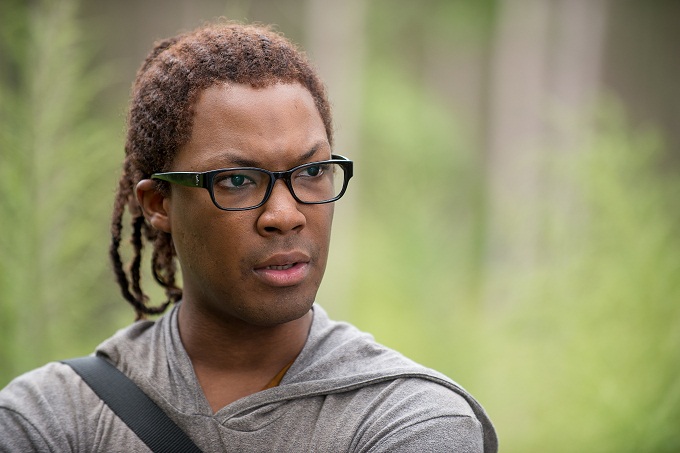 After it was finally revealed that Rick and Co. didn’t, in fact, take out all of the Saviors and there were at least 2 they missed (and likely much more than that) in the area, all kinds of questions were raised. One of the big ones is if the Saviors had been watching, why in the hell did they allow Tara (Alanna Masterson) and Heath (Corey Hawkins) leave, and with a car no less! Supplies, especially cars and weapons, are as precious as gold, and it seems likely that the Saviors would have allowed them to just waltz through the gates — well, unless they have an ulterior motive.

If you had listened to Gregory and Jesus at the Hilltop, you will recall that even though Negan is a killer and a tyrant, he is also a businessman. For the most part, Negan and his Saviors do what they do for the same reasons Rick does — to survive. And to survive, you need food, weapons, ammunition, and medicine which are the things that they strong-arm from the communities that they overpower. Well, as I mentioned earlier, it is very likely that the Saviors know that Rick and his group are from a larger community, and the first thing on Negan’s mind is “Where is it?” You can’t feasibly find this out if everyone is dead.

Instead, if you’re smart, what you do is follow them which is exactly what I think Tara and Heath have been set up to do. Granted, they are going on that supply run, but eventually, they will end back up at Alexandria, thus leading the Saviors right to the front door. Of course, if they get to that point, the Saviors will no longer need Tara nor Heath and could then kill one or both of them.

CAROL, MAGGIE, AND THOSE BLACK HOODS

After Carol (Melissa McBride) and Maggie (Lauren Cohan) are captured, at first I thought that they’d both be safe because Negan will want their stuff, and he won’t be able to find their community if they’re all dead. Well, then I realized that the Saviors had already covered that base by letting Tara and Heath leave. So, where does that leave Carol and Maggie? Not in a good position at all, in my opinion.

However, the part that really creeped me out was actually the promo for next week’s episode. Here we get to see how Carol and Maggie were captured and led away with black bags over their heads. If you know the comics, does this scene remind you of anything? 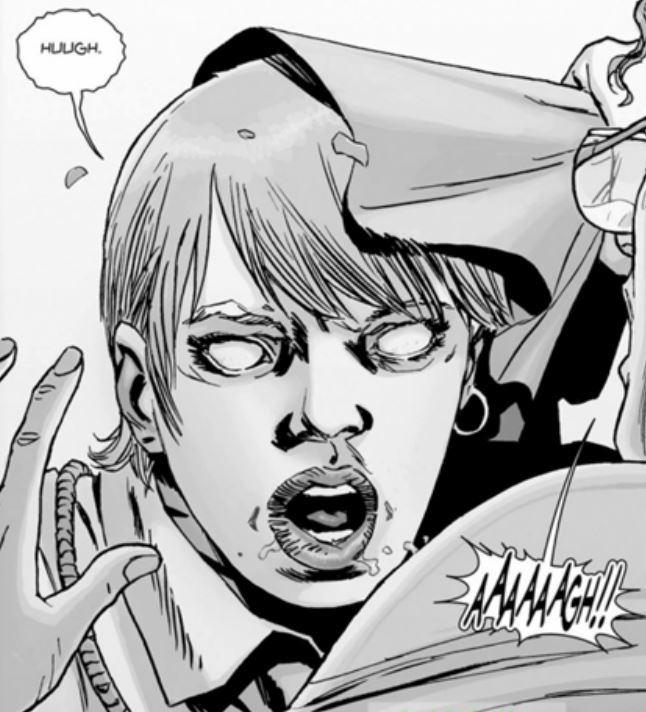 Well, in the comics, a girl from Alexandria by the name of Holly (who also has a striking resemblance to Carol, BTW) is captured by the Saviors. After much negotiation, everyone thinks she is being released, and she is led back to Rick’s group with the same signature black bag on her head. The only thing is when the bag is removed, we see she is dead and has, in fact, already turned into a walker.

Will Carol meet the same fate as Holly? I personally would be shocked, but at the same time, the writing is certainly starting to appear on the wall.

RICK, THAT WAS JUST A SAVIOR OUTPOST, YOU NUMB-NUTS

When Rick pulled up to what appeared to be Negan’s flimsy “compound” in last night’s episode, I bet he thought, “This is going to be a piece of cake.” And, for a moment, it seemed like that was the case — at least until he realized he had been duped, and the Saviors now had Carol and Maggie and all of the leverage.

The problem is Rick listened to that guy from the Hilltop, and while I don’t think he lied, I certainly don’t think he had all of the information — and certainly not enough to stage a massive attack. You see, if Negan is even remotely like his comic-book counterpart (and every indication says that he is), then he is smart — very smart, in fact — and there’s no way he would lead other survivors to his actual compound. Instead, he would have them make drops at certain “outpost” locations, thus leaving the location of his base unknown. 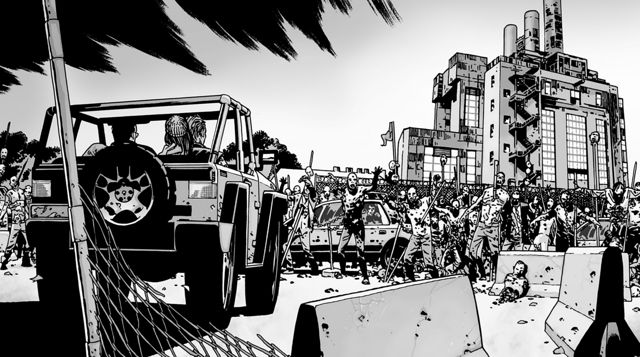 This is a picture of Negan’s real home base from the comics, and as you can see, it’s very big, very intimidating and a far cry from those tiny crappy buildings Rick believed were his compound in last night’s episode. And, if this turns out to be true, I think Rick will quickly see he may have bitten off way more than he can chew.