The Strain: Top 5 Reasons Why I’m Thankful For This Show 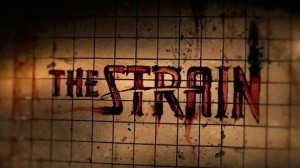 Tis the season to be thankful. Looking back on this year, I came to realize that I am thankful for the great joy some of the fantastic shows on television have brought me. And, at the very top of my list is The Strain. Yeah, yeah, initially I thought it sounded a little strange too — you know, being thankful and that being combined with vampire-like freaks with 6-ft python blood-draining stingers and white, worm-infested blood. But, when you think about it, there is a hell of a lot to be thankful for this show. Here’s my top 5 reasons:

You would think that with all of the horror movies out there and just about every monster and creature having been done, re-done and rebooted, it would be damn-near impossible to come up with a new,original idea that would truly shock and freak out viewers.  Well, FX managed to pull it off, and I must admit it was pure genius. 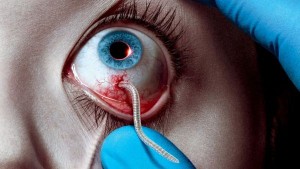 Before the series even premiered, we already knew that worms somehow were instrumental in spreading the virus. FX ended up taking full advantage of this, making the face of the series a very disgusting depiction of a worm crawling into a human eye — something that would make the skin crawl of even the most hard-core horror fan. However, it caused a great deal of controversy, and so much so that FX had to take down their billboards. But, at the end of the day that really didn’t matter because enough people had already seen it, and it remains as THE image associated with the show — and one that viewers won’t be forgetting anytime soon.

As we all know, the variety of shows on Sunday nights aren’t that great. In fact, some might say Sunday (and also, Friday) night is where a show goes when it’s about to die. However, The Walking Dead changed that, but that show airs only 4 months out of the year — we are still stuck with 8 months of epic Sunday-night boredom.

As you can probably imagine, I was beyond thrilled when The Strain came along. The Strain airs July through October, and so now we officially have 8 full months were I can honestly say Sunday is my favorite day of the week and definitely the best night for television. 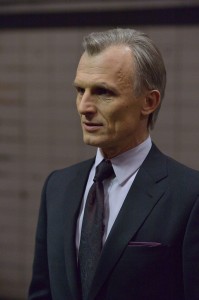 The Strain has an extremely talented cast ranging from Corey Stoll (House of Cards) to David Bradley (Game of Thrones). However, the most talented by a long shot — and definitely the dramatic gem of the show — is Richard Sammel. Sammel plays Thomas Eichhorst, a former Nazi Lieutenant who gave up his life and humanity to serve as the powerful second-in-command to The Master, one of the most elite and high-ranking vampires, and Sammel’s portrayal is utterly amazing.

Eichhorst is a total wretch, and that short opening scene in episode six “Occultation” said it all. The man comes in the room in a stylish robe and pulls the poor guy to him with some ancient pulley mechanism. It’s almost as if Eichhorst was saying the guy meant nothing to him, just a lowly food source, and he wasn’t even worthy of his walking to him in order to feed.

Whoever developed this character for television in my opinion is a genius and deserves a big, gold star. If you could take a Nazi commander and displace him to 2014 New York City, this is exactly what he would be and how he would behave. The Nazis viewed Jews in the camps as a bunch of nobodies, as lowly bugs who were barely worthy to be squashed. Eichhorst treated his prey in “the breakfast room” in exactly the same way. The only difference now is Eichhorst’s hideous face now matches the monster that has been brewing inside for close to a century now.

The irony of this is while Eichhorst is one of the most horrific villains on television, I can guarantee you that the majority of the fanbase is rooting for this man (myself included!). And that is in large part due to the actor Richard Sammel. Eichhorst does one God-awful thing right after another to our beloved characters on the show, but man, he does it so perfectly, and it is such a pleasure to watch. Does that make all of us sadists? No, absolutely not! It means that Sammel plays the role to perfection and makes Eichhorst feel so real that you want to see more, know more, regardless of the atrocity that he is.

2. Finally! A vampire drama true to the horror genre

God, I have grown so tired over the years of all the vampire movies and television series that classify themselves as horror but are really nothing more than soap operas fit for giddy teenage girls. Vampires that sparkle (like we should think that is somehow attractive and sexy?). Vampires who fall in love and have romantic problems, and we’re supposed to get all teary-eyed and feel sorry for them. Gee whiz, man, it’s enough to make you heave!

Given that, you can’t even begin to imagine how freaking excited I was when The Strain premiered this past summer Finally a vampire-inspired show that was actually scary and which took a back-to-basics approach to the mythology. In fact, if you think the original Dracula was terrifying, then honestly you haven’t seen scary. Take some of the basic elements from the classic folklore, replace the fangs with a giant snake-like “stinger,” and add in some disgusting bloodworms who like to invade every orifice in the human body including the eyes, then you have these creatures of the series commonly known as the strigoi.  Creepy, freaky, and definitely the things nightmares are made of. 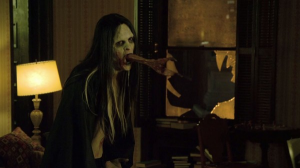 1. The realization that every, single day is a gift and you should be thankful for it.

This is the big one, folks. This is the main reason I am thankful for The Strain. We celebrate Thanksgiving once a year, and for the most part, take the other 364 days for granted. What’s more, we often take for granted the people closest to us — our “loved ones” as the show would call them — and sometimes we see them only once or twice a year. Most of us go to bed every night and wake up every morning with not too many major worries and always thinking that the people we care the most about will always be there. But, what if there were an outbreak like in The Strain, our “dear ones” were the targets and every day was filled with fear, not knowing if this was going to be your last day on earth? Or whether your father, mother, son, daughter, were going to be gone tomorrow? In The Strain this is the characters’ world. Every moment of every day they are thankful for, and I think we could learn to appreciate more of what we have by thinking about that.  Nothing, absolutely nothing, should ever be taken for granted, and be thankful for everything and everyone in your life — not just on Thanksgiving, but all year long.

Happy Thanksgiving, everyone, and let us all give thanks for everything wonderful in our lives — including The Strain

The Strain returns for season 2 in the Summer of 2015.

If you’re already in the holiday spirit and would like to spread your love of The Strain with everyone on your Christmas list, The Strain Season One  will be coming out on DVD just in time for the holidays. The DVD set will be available this Tuesday, December 2nd, and can be pre-ordered on the online FX Shop.