“The Strain” Season One DVD Review 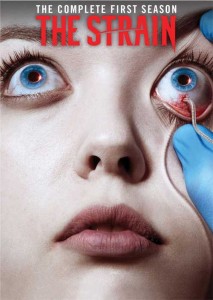 Warning: Some spoilers ahead

Hey, all you Strainiacs out there. The day we’ve waited for over the past few months has finally arrived, with season 1 of FX’s The Strain being released yesterday on DVD and Blu-ray. I was one of the first in line to get my copy, and I can assure you this DVD set will be one of my top stocking-stuffers for the holiday season.

For those who are not familiar with The Strain or may have only heard of the show, the series is based upon a book trilogy written by Guillermo del Toro and Chuck Hogan, and the story begins when an airplane with 210 passengers lands at JFK from Berlin with all but 4 dead — or apparently so. No indicators of terrorism. No signs of trauma. No nothing. A virus or some kind of contagion is their best guess and so the CDC is called in to investigate. But, what they find is far worse than any disease they have ever seen and far more sinister. The series stars Corey Stoll (House of Cards) as Dr. Ephraim Goodweather,Mia Maestro as Dr. Nora Martinez, Jonathan Hyde as Eldritch Palmer, Sean Astin (Lord of the Rings) as Jim Kent, Kevin Durand (Lost) as Vasily Fet and David Bradley (Game of Thrones) as Professor Abraham Setrakian.

Aside from the DVD’s beautiful cover art, the set is divided up into 3 discs with each disc also having a special bonus feature.  Below is the list of episodes on each.  I covered The Strain for the entire 1st season, and if you click on the title of each episode, you will be taken to a video and photo preview (WARNING: some spoilers may be in the previews, for those who have not seen all of the episodes).

Of all the episodes, my personal favorite is “Creatures of the Night,” and if you want to preview any, this is the one you want to check out. It is the most action-packed by far, it’s scarier than hell, and if you are a die-hard horror fan, you definitely won’t be disappointed.

“Creatures of the Night” Teaser:

As I mentioned, each disc also has a bonus feature, that spotlights behind-the-scenes footage, the making of a particular episode or takes a closer look at the set.  The extra on Disc 1 highlights the outbreak at the very beginning and how it spread throughout Manhattan. The bonus on Disc 2 is titled “A Novel Approach” and features interviews with Guillermo del Toro and several of the cast members about the big advantages of adapting The Strain trilogy into a television series. Characters in the books that didn’t have a great deal of depth can be developed a lot more since you have the time to do so in a television series, and also, characters that weren’t even in the trilogy can be introduced. Below is a sneak peek:

The final bonus segment features a closer look at Abraham Setrakian’s “batcave,” also dubbed “Setrakian’s Lair.” Setrakian had encountered The Master’s second-in-command, Thomas Eichhorst, over 70 years ago while a prisoner in a Nazi concentration camp during World War II, and he always knew the day would come when they would meet again and he would stand face-to-face with The Master. So, he went to extreme lengths to prepare, which included making the basement of his pawn shop pretty much a fortress and accumulating a giant hoard of weapons as well as silver (which the creatures AKA “the strigoi” are afraid of and can even be killed with). Below is a sneak peek of this feature:

So are you excited and ready to buy yours now? If you are (and you should!), you can find it at the FX Online Ship or on Amazon.com.

The Strain has already been renewed and will return for Season 2 in the Summer of 2015.