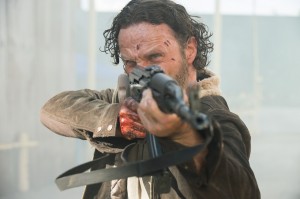 If I had a dream of the absolute perfect episode of The Walking Dead, tonight’s season 5 premiere would be it. Oh. My. Effin. God. If you paid any attention to the promo and extended trailers, you’d know that Rick and the group would make it out of that train car. And you’d know that Terminus gets overrun presumably by that giant herd we saw in season 4. However, this was just a teaser because what we ended up getting I’m sure rocked the entire Walking Dead world tonight.

Ever since we saw the memorial room in the season finale with the writing “Never again. Never trust. We first always,” on the wall, I knew this group was going to have a horrible, gut-wrenching backstory. And within the first five minutes we get a pretty good glimpse. As I suspected, Gareth (Andrew West) and his followers were good people, and yes, Terminus was a real sanctuary at least in the beginning. But as Morgan (Lennie James) so wisely said in the episode “Clear,” “the good people always get taken.”

And the Termites did. A terrible group of people followed the signs, but they weren’t looking for sanctuary. They raped, killed, stole and when they got bored, they moved on, leaving Gareth and his people cold, hardened and very disillusioned. Never again. Never trust. We first always. And so the sadistic, cannibalistic Gareth and the new Terminus were born.

Melissa McBride already blew season 4 away with her performance in “The Grove,” and tonight, I think she has already blown the new season away before it barely gets started. Holy crap. Rick (Andrew Lincoln), Daryl (Norman Reedus), Bob (Lawrence Gilliard Jr.) and Glenn (Steven Yeun) are led into what appears to be a slaughtering area, along with several red shirts including the young kid, Sam (yes, folks, that’s Robin Lord Taylor who is also The Penguin on Gotham), who Rick had met earlier in the last season.

If you know anything about cattle and slaughterhouses, you know that the first step in slaughtering an animal is kill it, then bleed it out. This is exactly what Gareth does, killing Sam first, slitting his throat and then, just letting the blood drain in a huge washing basin. Same thing for the other three red shirts. Glenn is next and just when we think he’s about to get it, Carol (Melissa McBride) makes a big boom — literally. 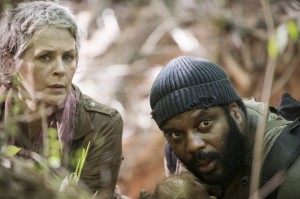 Tyreese (Chad Coleman), Carol and Baby Judith get pretty close to Terminus but see a large herd heading that way. Carol insists that they need to get to Terminus because the rest of the group may be there and what she does to get through the herd proves that while she may be a woman, she is the smartest damn cookie on the entire team. Carol pulls a Rick from the season one episode “Guts” and covers herself with walker innards giving her the perfect disguise to make it to the perimeter of the compound.

Once she makes it there, she immediately finds everything she needs to bring the place down. A gas tanker. Some fireworks. An automatic rifle. And within minutes the place is going up in flames.

Fortunately, Rick and the entire group are able to get out, but it was still a hell of a battle scene, very reminiscent of the big herd attack on Hershel’s farm in the season two finale “Beside the Dying Fire.” Most of the Termites appear to have gotten eaten and some of them even by flaming walkers (yes, there is one thing worst than a walker — a flaming walker!). The only exception is Gareth. It looks like Rick may have shot him, but if you go back and re-watch the trailer, you know that he’s going to be back. So Rick may have won the battle. But, has he won the war? 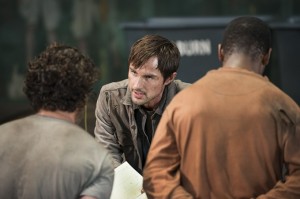 We all knew from the Comic-Con trailer that was released in July that Rick would eventually be reunited with Judith and we’ve all been waiting for it. It finally happens at the end of the episode and it is probably one of the most emotional scenes of the entire series. If there ever was any doubt that Rick loved Judith because she may have been Shane’s, this scene put all of that to rest because those were real tears and Andrew Lincoln just nailed the scene. Bravo to you, dude!

We also got an added bonus of an equally emotional Daryl/Carol reunion. Man, Daryl actually cried! I think the only other time we’ve seen him do that was when he found Merle turned and had to kill him. I’m sure the Caryl shippers are thrilled and while I can’t really call myself a shipper of these two, I’m pretty happy about it too. 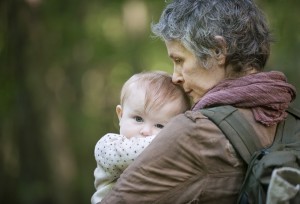 The best part, however, is Rick’s realization that Carol — this woman he exiled from the prison and the group — is the only reason they are all still alive.

Did you do this? Thank you, thank you so much — Rick to Carol as he hugs her

I think Carol is officially back in the group. Awesome.

A New Villain Is In Town

The final scene is full circle back to where we were at the beginning of the episode with another flashback of Gareth and the Termites under attack. Mary is thrown by a group of men back into a train car after having been raped (where we also learn that Mary is Gareth’s mother and Alex is his brother). Then, the leader of this group of sickos steps forward to pick another girl to rape and I nearly pissed my pants. No joke.

Okay folks, I thought about saying nothing at all because not all of the viewers are familiar with the comics, but I finally decided this was just too big to ignore. After the Governor, there is a “supervillain” in the comic book series named Negan. He’s an extremely large guy, with black slicked-back hair and he’s the epitome of evil. He’s an opportunist who uses the apocalypse to his advantage to rape, kill, steal and commit any other crime he feels like without the fear of any consequences. However, his hallmark is torturing people while laughing about it and savagely raping women. 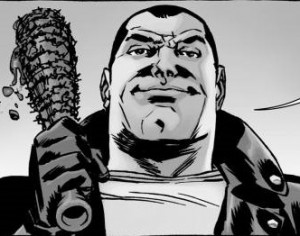 I’m sure there’s going to be lots of speculation of who this is, but all my money’s on Negan. In the comics, Negan traveled around a lot, wreaking havoc and causing unimaginable pain and despair in one place, then moving on. So he’s long gone from Terminus, but it’s a foregone conclusion that he’ll cross paths with Rick and his group eventually. The only question is how will Rick react? Will he follow the same path that Gareth did?

You either be the butcher or you be the cattle — Mary

Which will it be, Rick?

This is definitely the best episode of The Walking Dead thus far — absolutely no competition. With that herd attack, it certainly had plenty of walker action and gore, which is what the hardcore fans crave and what made this series so popular in the first place. But it also took two completely unrelated and separate storylines from the comics that were already good and bridged them together into a common arc, creating a single story that is beyond great and beyond perfect (assuming the baddie at the end of the episode is Negan, of course, and that remains to be seen). In the comics book series, the Hunters (AKA “the cannibals”) never cross paths with Negan and his crew and, in fact, the Hunters are killed before Negan even shows up. But making Negan the cause and the catalyst for Gareth and his followers to become killers and cannibals — that is pure genius.

And if the episode weren’t already perfect? Having Morgan show up at the very end and on the trail of Rick and his group, that was just amazing. Also keep in mind folks, that executive producer Scott Gimple wrote this episode. I know there have been lots of doubt cast towards Gimple since he took over for Glen Mazzara, but I think this episode demonstrates that this guy is good — really good — and that he’s here to stay.