The Strain “The Third Rail” 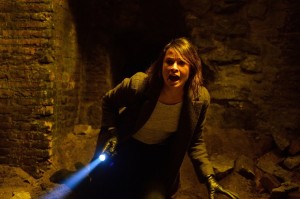 Just a couple of episodes back the old, wise Setrakian (David Bradley) made the comment that both he and Fet (Kevin Durand) were “made for this line of work of vampire hunting” because neither of them had ties to anyone and both lacked emotion. Well he was right about Fet, but I think it’s high time he takes a long look at himself because that little thing called emotion dang near got himself and the rest of the group killed.

In this episode, Setrakian and his crew go on the offensive and officially take the strigoi fight underground into the abandoned subway tunnels surrounding the World Trade Center. So down goes Setrakian, Eph (Corey Stoll), Nora (Mia Maestro) and Fet, armed with only some silver swords, UV lamps and a prototype UV bomb designed by Vasily, with the first one — the “pre-prototype” — failing miserably. In fact, Zach (Ben Hyland) calls it quite accurately an “epic fail.”

Within just minutes of being in the tunnels, they all know immediately that they are in the right place. Disgusting ammonia residue is all over the ground and walls and scores of personal mementos are strung everywhere — the very things people dropped as they were turned and began losing their personal identity. Very sad, gut-wrenching scene.

Everything that defined these people — Nora

Well, I hope I’m defined by more than just my wallet and my wrist watch — Fet

This is one of the few instances when I actually agree with Eph and I hope that Fet remembers these words when he finds his parents (and make no mistake, that day will definitely come) turned. Unless you are a sociopath — and I certainly don’t think Fet is — everyone has a conscience and some emotion, it’s just that Fet is very adept at hiding his.

Very early on they encounter a relatively small group of newly-turned strigoi. Eph and Fet want to release them, but Setrakian insists that they are “immature” and more or less harmless at this point.

They’re nesting. During daylight hours, always. Especially when they are first turned. The transformation, it exhausts them — Setrakian

Plus as Setrakian very wisely points out, they are all a joint collective with the Master and killing them will only alert the Master to their presence. And given the fact that their mission is to track down and kill the Master, that would not be a very smart move. At this point in the game Setrakian is still a rock, while every now and then Eph and Fet have a little pissing contest over meaningless crap. But, more or less, the group is still solid and so they continue on further down the tunnels.

While all of this is going on, Eph’s “man-child” of a son (Eph’s own words for Zach all the way back in the Pilot) is left in charge of not only the pawn shop but also the senile and annoying Mrs. Martinez. If it were up to Zach, he would just make the most of the situation, check out the very cool weapons in Setrakian’s basement and just wait for everyone to come back. But Mrs. Martinez pitches a fit about not having any cigarettes, calls attention to herself at the entrance of the pawn shop and so, Zach obliges by agreeing to venture out and get her what she wants, just so she will be quiet and go back down into the basement.

Zach does finally make it to a looted convenience store and is able to get the cigarettes, but not before running into a strigoi and oh, by the way, Gus (Miguel Gomez). Yes, Gus! Too bad it wasn’t under better circumstances. Gus returned home only to have to put down his turned strigoi brother, Crispin, and to find his mother — also turned — hiding in the bedroom closet. Basically, Gus it out there all alone and homeless now, which is how he crossed paths with Zach in that convenience store. When I talked with Natalie Brown on Friday, she hinted that in these last few episodes of the season, we will probably see most of the characters starting to intersect and come together. And while Gus running into Zach (as opposed to Fet, Eph or Setrakian) isn’t exactly what I had imagined, it certainly is a step forward and I think we at least are headed in the right direction. Yay, now I’m getting really excited.

The episode begins to wind down with things starting to go from bad to worse in the subway tunnels for Setrakian’s crew. Using Kelly’s voice as a ruse to lure Eph away from the group, the Master (Robert Maillet) is able to isolate Dr. Goodweather and nearly kills him before the rest of the group is able to catch up.  Remember that prototype UV bomb that Fet made at the beginning of the episode? Well, the damn thing ends up working, saving Eph’s life, but also causing the Master to flee which, in turn, infuriates Setrakian. 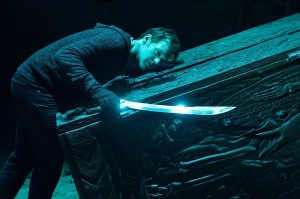 These last few moments had some fantastic character development for Setrakian and definitely were the best in the entire episode. Abraham may have held his cool when dealing with newly-turned strigoi and releasing them, but he definitely has a weakness when it comes to the Master. All of the memories and raw emotion from those days in that concentration camp came flooding back and instead of remaining calm, he let it all get the best of him and nearly got himself and the rest of the group killed. I had always imagined him as the strongest element on the entire team, but now it makes me wonder if he’ll end up being the weakest link. The only upside to his temper tantrum is that he did destroy the Master’s coffin, which now means the monster has no resting place. 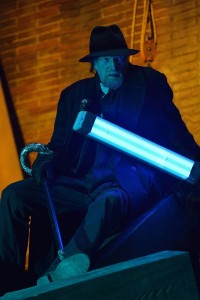 Just like all other episodes of this fantastic show, another great installment — maybe not quite as good as “Creatures of the Night,” but pretty damn close. It had me on the edge of my seat for most of the episode and it also ended with a heck of a cliffhanger. How many strigoi do you think was in that room at the very end? Hundreds? Thousands? And the group is trapped down there with the only way out being that same hole they crawled through (and the same hole that Fet could barely fit in).

The only question that remains is where in the hell is Mr. Quinlan and his swat team? He saved the day back in episode seven and maybe he’ll just save it again going into episode twelve. At least we can hope. Either way, Setrakian and Co. are in some serious sh*t and need all the help they can get.

Most memorable quotes and random observations