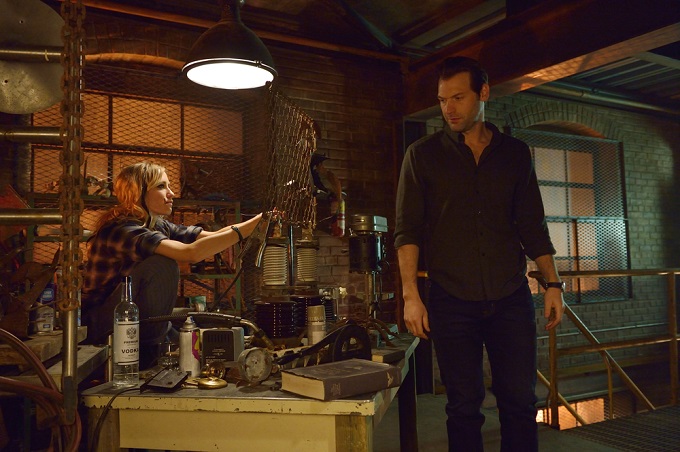 Wow, it seems like it’s been forever since that epic battle in the season 1 finale between the Master and Abraham, which culminated with the realization that sunlight doesn’t kill the monster and the Master is a much more formidable foe than they had thought. Fortunately, the wait is over with the 90-minute season 2 premiere having aired tonight. Armed with this new knowledge, season 2 makes a major shift when Team Abraham decides they need a change in plan if they have any hope in wiping out the strigoi forever.

The episode begins with something that I have really been looking forward to seeing — the origins of the Master. Book 1 of the trilogy begins with the story about a man named Jusef Sardu, a Polish nobleman whose body the Master occupied nearly 2 centuries ago. Last year, Guillermo del Toro said that he decided to put off the backstory of Sardu until the viewers had the chance to see the Master and had gotten familiar with him. Well, Guillermo kept his word, and season 2 opens with young Abraham being told the story of Sardu by his grandmother (so nice to see Kathleen Chalfant reprising her role!). Here we get some great flashbacks of of Sardu, who while suffering from gigantism and being quite intimidating due to his size, was also a gentle giant known for being kind and generous especially to children. However, it was his size that caused the Master at that time to chose Sardu to be his new host. On a hunting trip with his brother and cousins, Sardu comes face-to-face with the Master in a cave after everyone in the hunting party had been killed except for himself. The Master could have just killed him too, but he had other plans.

The blessing I bestow to you — The Master to Sardu

Then, the Master transfers his “spirit” to his new host, which amounts to burying poor Sardu with the motherload of bloodworms. I attended The Strain panel today at San Diego Comic-Con, and Guillermo del Toro said he wanted to make the worm transfer “both beautiful and disgusting.” Well, Guillermo, I think you hit this one out of the park, at least with the disgusting part. Eww. Eww. Eww.

Speaking of the Master and finding new hosts, we finally get a look at the present-day Master, and he’s not looking too good. While the sunlight didn’t kill him in the season 1 finale, it sure as hell did alot of damage. Badly burned, the Master tells Eichhorst A href=”http://www.imdb.com/name/nm0759898/” target=”_blank”>(Richard Sammel)  that he needs a new body and that he should have Bolivar (Jack Kesy)  go back and retrieve the soil of his resting place. Did everyone notice what Eichhorst did next? A new, smaller coffin has already been constructed, and Eichhorst feeling pretty confident that he will soon be the new Master, actually climbs in the new coffin and makes himself at home. Given that Eichhorst is the Master’s 2nd-in-command, you would think he would be the obvious choice for being the Master’s new host, right? I’m not so sure. Remember how Sardu was chosen? The Master singled Sardu out because of his strength and size. Eichhorst may be trustworthy and loyal, but he’s also older and relatively small. My gut says the Master has another strigoi in mind, and if that turns out to true, how do you think Eichhorst will react? I can guarantee you, not well. 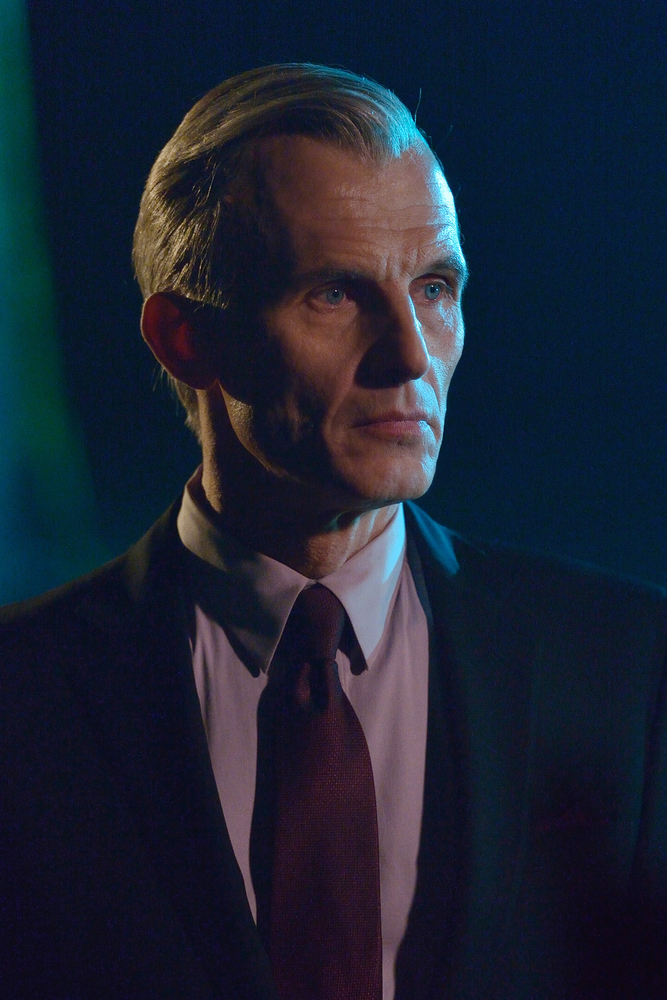 As I had mentioned, there is a big shift going into season 2 on the strategy to take down the Master and his hive, and for Dr.’s Goodweather (Corey Stoll)  and Martinez (Mia Maestro),  this means backing off trying to literally defeat the Master and instead focusing on a possible cure.  The books are silent on any attempts in finding a treatment for the strigoi pathogen, which I found to be very odd since the 2 main characters are actually doctors. You would think finding a cure and/or vaccine would be one of the first things they would try. So, needless to say, I was thrilled to see the writers go down this path, and I’m especially curious to see whether they succeed. They do, however, seem to make a good start. They set up shop in a pathology lab and begin to throw around ideas. It’s obvious that a cure for a person who has fully turned into a strigoi is impossible since the host’s biology has already been re-worked. So, they finally come up with what I consider a brilliant idea — infect the infected. That is, find some weakness in the strigoi biology and then, exploit it. However, in order to do their research, they need newly-infected subjects, and fortunately (at least for for Eph and Nora), they are in luck. The group goes with Abraham to a storage locker to retrieve a stockpile of supplies and weapons, and after being attacked by a huge group of strigoi lurking in the facility, an older couple hiding there is infected. Vasily (Kevin Durand) wants to shoot them and “put them down,” but as Eph points out, “No, we need them.” 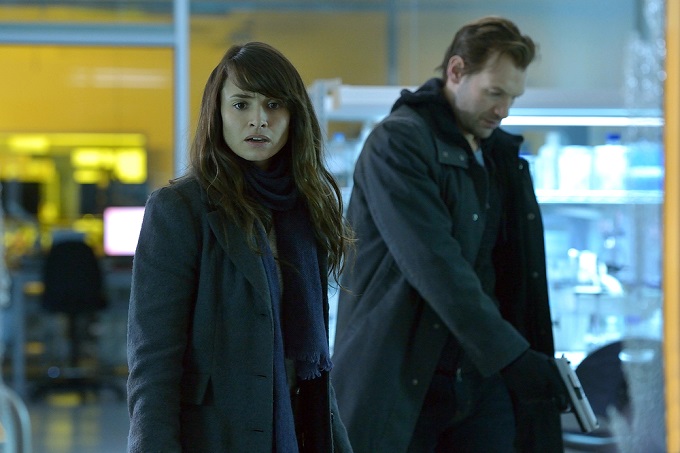 While Eph and Nora go back to what they are best at — science — Abraham goes rogue and begins a quest for an ancient tome, the Occido Lumen, that supposedly holds the secrets of the origins of the strigoi as well as their weaknesses, information that could potentially be used to kill them. By doing this, he crosses paths with the Ancients and the “hooded strigoi” from the last season i.e. the character we were all led to believe to be one of the most pivotal characters in the books, Mr. Quinlan. Back towards the end of last year, Guillermo del Toro and Chuck Hogan revealed in an interview that they had decided to rework the Quinlan character and that the “hooded strigoi” we had seen wasn’t, in fact, Quinlan but someone else. Even though this mysterious strigoi looked like Quinlan, acted like Quinlan, recreating the character was still feasible since his name was never revealed. We learn tonight that this strigoi isn’t Quinlan but some other character named “Vaun” — basically just another one of many foot soldiers for the Ancients. For those who are familiar with the books of the trilogy, this is likely very confusing and quite possibly upsetting, as we were led to believe that this “Vaun” was indeed our Quinlan.

Vaun takes Abraham to see the Ancients, and as it turns out, they want to form an alliance. When the Master was injured, he couldn’t shield his thoughts, and so, they were able to see Setrakian fighting the Master. The deal is they will work together, but if Abraham finds the Master, he must alert the Ancients. Setrakian wants to find the Occido Lumen and will likely need the Ancients, and so, he agrees to the deal. But, before Abraham gets the chance to leave, the Ancients start to wake up, which means it’s time for them to be fed. Just like Sardu and that flood of bloodworms — ew, ew, ew. Some poor schmuck is brought in, and we have a scene very similar to Eichhorst’s breakfast room, except now you have 6 strigoi instead of just Eichhorst. Setrakian is utterly horrified, and Gus is too, but hey, this is the less of 2 evils.

The episode ends with something the fans of the books have been waiting for and something that was teased this weekend at San Diego Comic-Con — the introduction of the “feelers.” As we may recall from season 1, the Master has some plan for Kelly (Natalie Brown), and Kelly wants her son, Zack. So, Eichhorst forms a partnership with Kelly and gives her her own “family” — a large group of newly-turned blind children.

Rejoice, Kelly, for you have an important role to play in the Master’s great vision. To that end, he has bestowed upon you the blessing of a new family. They have unique abilities, sight and perception beyond the visible spectra. Behold the feelers, the children of the night — Eichhorst to Kelly

Now, isn’t everyone thoroughly excited now? I know I certainly am! A fantastic ending to an already fantastic episode.

All in all, I thought this was a great start to the season. Eph and Nora have a plan. Abraham is on the trail of the Occido Lumen and have finally met the Ancients. And, now, we have the feelers too! So much goodness in such a short period of time! As I had said before in my Advance Preview, the only thing that really bothers me in this episode is the reinventing of the Quinlan character, and I know there are lots of viewers out there who feel the same way. However, I have decided to adopt a “wait-and-see” attitude. The real Quinlan is supposed to be introduced sometime near mid-season, and once I have seen the recreation of the character, I will be able to better assess whether tearing down the image so many fans already had of Quinlan is worth any gain we may get with the new-and-improved version. Bottom line — we shall see.

I was at San Diego Comic-Con this weekend, and as part of it, I attended The Strain press room where I had the opportunity to interview the entire cast as well as Carlton Cuse and Chuck Hogan. Below are the interviews with Carlton Cuse and David Bradley. In the interview with Carlton, he discusses some of the things fans can expect going into season 2. And, in the interview with David, he talks briefly about Setrakian’s introduction to the Ancients and what role their forged alliance will have later in the season. Pay particular attention to Kevin Durand interrupting the interview, as it is a fantastic example of what great chemistry these 2 actors have.