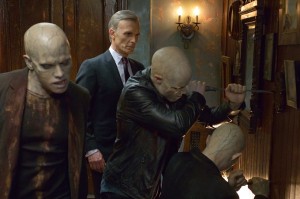 When I talked to Natalie Brown last week about what to expect in the final episodes of season one, the one thing she said that stayed with me was how much she was looking forward to all of the characters finally intersecting. We have Setrakian’s (David Bradley) crew, Gus (Miguel Gomez) and Mr. Quinlan (Stephen McHattie) all out there working towards a common goal, but all working separately. While tonight’s episode didn’t unite all of the characters, it did get everyone in a single episode for the first time. But more importantly, it brought together two of the most important characters from The Strain trilogy, which is certainly a step in the right direction.

Dutch Is Back and Has a Plan

Truth be told, I always knew Dutch (Ruta Getmintas) would be back. After all, why go through all the trouble of creating a new character just for the television series and then, have her disappear without a trace. I just didn’t know her return would be so quick. This time, instead of just standing around and doing nothing, she has a plan and it’s actually a pretty good one.

Her idea is to hack into the emergency broadcasting system, giving Dr. Goodweather (Corey Stoll) about 30-40 seconds to get a warning out about the vampire plague before the network techs notice the intrusion and cut them off. And this isn’t just New York City — this is every television and radio station in the entire country. Pretty slick plan. And to everyone’s astonishment, the damn thing works. Eph isn’t able to get his entire message out, but hopefully people heard enough and will take the warning seriously.

This arc was good, really good. In the books, it was Zach (Ben Hyland) who helped his Dad with this, but he was able to get only the video of Ansel Barbour (Nikolai Witschl) turned out on YouTube. This is so much better. 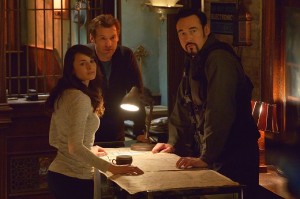 Oh, an extra bonus from this plan — Vasily (Kevin Durand) and Dutch get pretty darn cozy and we learn Dutch isn’t the lesbian that everyone had thought (very likely bisexual instead). And it’s fairly obvious that Fet digs this girl and the attraction appears to be mutual. Man, I bet every Kevin Durand fan girl is totally flipping out about now.

So tell me, men or women? — Vasily

I specialize in passive-destructive relationships — Dutch

And those are the best kind — Vasily

Whoa, damn! So we have our first post-apocalyptic romance in the making and I like it.

Several little arcs in tonight’s episode are somewhat different from the source material and this is the first one. I won’t say who Vasily ends up with in the books, but I’m not sure the viewers would have cared for it much if they had gone down that path in the television series. This potential relationship works much better and just seems to fit. So, cheers to the writers for that.

The Setrakian and Eichhorst (Richard Sammel) flashbacks have been a highlight of the season, with Jim Watson doing an exceptional job as the young Setrakian. Tonight we are treated to more of these and are provided another piece of the puzzle of the sordid past and animosity between these two men.

We have known since episode 2 when Eichhorst visited Setrakian in jail that Eichhorst was responsible for the death of Setrakian’s wife, Miriam. Through tonight’s flashbacks we learn how all of that went down and I must say it’s one of the most heart-wrenching stories ever.

It’s 1967 — a good twenty-three years after World War II had ended — and Abraham is still obsessed with the Master. He is now married to a sweet, crippled (presumably from polio — at least that was her ailment in the books) woman named Miriam and while she knows his obsession is not healthy, she supports her husband anyway. One night he is led to an old castle and stumbles on a nesting of about two dozen strigoi. It turns out the entire thing was just an elaborate trap with the Master speaking to him and taunting him through one of the strigoi:

Drop that sword, Setrakian. The sun is setting and you’re so far from home

Eichhorst is apparently in on it too, as he pulls up the rope from the underground cavern leaving Setrakian with no way out. At this point, Setrakian knows and the audience has a pretty good clue what is about to happen. Somehow and even with Setrakian’s disfigured hands, he is able to climb out. But it’s too late. He returns home to find it a total wreck and no sign of Miriam — except for her leg braces lying on the floor.

This was a brilliant use of flashbacks, because while we are seeing one showdown playing out in the past, we get to see another one between the same two men in present time at Setrakian’s pawn shop. Right after Dr. Goodweather’s broadcast, the pawn shop is attacked by Eichhorst and about a half-dozen of his new acolytes including Bolivar (Jack Kesy Been wondering where that guy has been.) 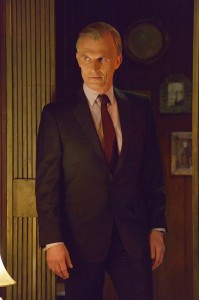 Everyone is able to get down in the basement in time with the exception of Mrs. Martinez (Anne Betancourt) who is attacked and infected by Bolivar. Poor, poor Nora. She knows what needs to be done — and Eph even offers to do it for her — but she has to be the one to do it.  So while we are watching the flashback of Abraham being forced to behead his wife, Nora does the same to her mother. Painful. Depressing. Sad. Just awful. But also wonderful and fantastic as well. The writing team did a superb job putting these scenes together and they are definitely ones that the viewers will remember.

I have been anxiously waiting for Mr. Quinlan’s return ever since he was introduced in “For Services Rendered.” What’s more, in the books Mr. Quinlan recruits Gus onto his personal swat team and I have been very curious if they were going to follow that story line in the television series.

Well, we got our answer tonight and I couldn’t be happier. In fact, I am ecstatic. Unlike Setrakian’s crew, Gus is the one main character out there all alone, fighting for his life. He needs guns, he needs ammo and anything else he can find to fight off these things and stay alive. If you needed all of this and very quickly, what better place to look than the leader of one of the top criminal enterprises in New York City. We don’t know much about the guy, except his name is Alonso Creem (Jamie Hector, The Wire), he’s a criminal and a creep and we should remember him as the guy Gus and Felix sold the stolen car to in “It’s Not For Everyone.” 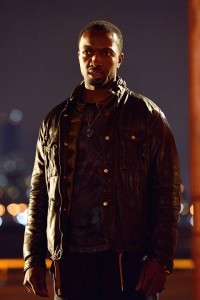 He has everything Gus needs and then some — plus, he has a bag full of cash that he was paid to ship about a dozen shipping containers. Gus is a pretty smart guy and immediately realizes that if Creem were paid that much, whatever’s in those shipping containers had to be extremely valuable, right? Nothing could be further from the truth.

It turns out Creem was just another pawn in the Master’s scheme just like Gus had been (hell, Eichhorst was probably the one who hired him too), because after opening one of the containers, they learn they are full of mature strigoi being shipped to who-knows-where. Oops. This is a pretty bad situation because we have Gus and Creem against about two dozen of these vamps and to top it off, that idiot Creem starts using the few bullets they have and shoots at Gus. How precious.

Fortunately for both of them, Mr. Quinlan shows up to save the day, just like he did in episode seven with Neeva and the two children. In just a matter of seconds, all two dozen vamps are dead on the pavement and Gus just stands there, jaw dropped, in complete shock. Who in the hell is this guy? However, the real shock comes when two of Quinlan’s men grab Gus, put a bag over his head and take off with him in a black SUV. WTF. 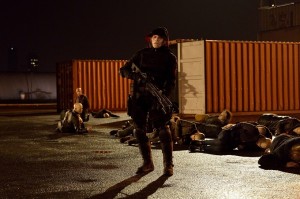 But, no worries, folks — Gus did not just get kidnapped. Mr. Quinlan is a warrior, knows a good fighter when he sees one and could see what a valuable asset Gus would be on his team. Gus may be confused and pissed now, but he will soon realize he’s just been recruited onto an elite team, the absolute best of the best.

Last but definitely not least, I absolutely loved the humor in this scene. Mr. Quinlan may be good at picking good vampire hunters, but it looks like he may have ‘dumb and dumber’ on his team because neither of his men seem to have a clue as to which guy their boss wants them to take.

<Motions for them to take Gus instead>

The last major thing that happened in tonight’s episode is one that I’m not entirely sure how I feel about. In the books, Palmer (Jonathan Hyde) is never turned by the Master. Instead, the Master just got tired of his shit and constant nagging and kills him, as well as Mr. Fitzwilliams (Roger Cross). I truly thought that was where we were heading tonight, but it didn’t happen like that at all. The Master (Robert Maillet), in fact, keeps his word and Palmer got what he wanted and is now immortal. Wow. This is a major deviation from the source material and like I said, I can’t really say right now if I think it’s a good thing or a bad thing. However, the writing for this season has been exceptional and I have faith that the creative team has a great story line down the road that is better served by keeping Palmer alive.

Next week is the season one finale and with everything that happened in this episode, I absolutely cannot wait to see what they have in store for us. Will Mr. Quinlan and Gus finally meet Setrakian’s group? Will they be able to locate the Master? But most importantly, now that Setrakian and his followers have lost the refuge of the pawn shop, will everyone make it out of the finale alive? It’s going to be a nail-biter, that’s for sure.

The season one finale of The Strain is titled “The Master” and airs next Sunday at 10/9c on FX.