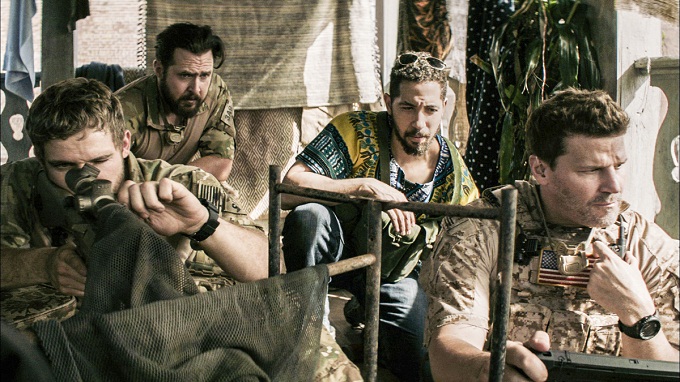 “Tip of the Spear” — The most elite unit of Navy SEALs must navigate their professional and personal lives as they train, plan and execute the most dangerous, high stakes missions our country can ask of them, on the series premiere of SEAL TEAM, Wednesday, Sept. 27 (9:00-10:00 PM, ET/PT) on the CBS Television Network. Pictured left to right: Max Thieriot as Clay Spenser, AJ Buckley as Sonny, Neil Brown Jr. as Ray and David Boreanaz as Jason hayes. Photo: Best Screen Grab Available/CBS ÃÂ©2017 CBS Broadcasting, Inc. All Rights Reserved

Ho hum….another Military Procedural…and guess what.  It’s about the elite Navy SEALs.  It wasn’t long ago that the military was kind of shrouded by secrecy, but now military procedurals are almost as common as police procedurals.  I guess as long viewers have an interest in the military, we will keep seeing these pilots pop up.  And, hey, it’s a great recruiting tool, and goodness knows we certainly need to recruit more soldiers, sailors, and airmen with all of he growing conflicts around the world.  Good for CBS.

Full disclosure…I am a Veteran.  So, I am particularly interested in these shows.  Not only because I like to critique the accuracy of Hollywood and how they honor the military – or laughably screw it up;  but also because its relatable and in a way it makes me feel a little nostalgic.  Having said that, I feel like I can offer you an interesting perspective into this particular genre.

Even though I began this review with a ho hum…the show itself is far from ho hum.  For a pilot, it is definitely action-packed and on solid ground although they still have a ways to go before finding their footing.  And with the Wednesday at 9 p.m. time slot, there is NO WAY that CBS will miss its  (ratings) mark with this show.  AND the “hair missle,” the hair missle will have its own fan club, for sure. 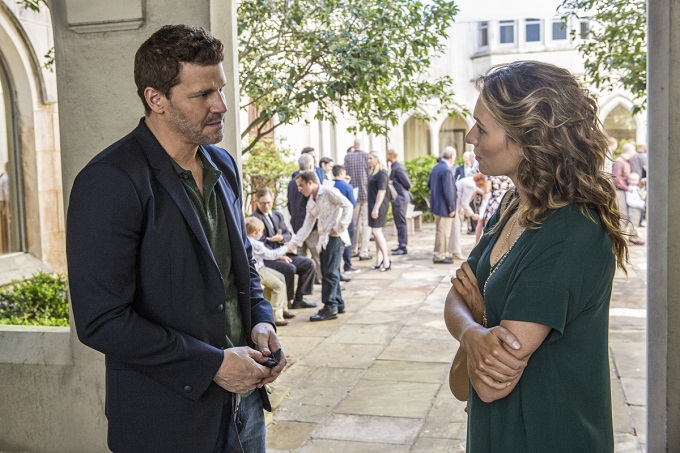 “Tip of the Spear” — The most elite unit of Navy SEALs must navigate their professional and personal lives as they train, plan and execute the most dangerous, high stakes missions our country can ask of them, on the series premiere of SEAL TEAM, Wednesday, Sept. 27 (9:00-10:00 PM, ET/PT) on the CBS Television Network. Pictured left to right: David Boreanaz as Jason Hayes and Michaela McManus as Alana Hayes. Photo: Skip Bolen/CBS ÃÂ©2017 CBS Broadcasting, Inc. All Rights Reserved

David Boreanaz does an amazing job carrying the pilot. And he has a great supporting cast, as well.  Every one is a seasoned veteran in their own right.  But I was a fan of Bones (David’s last 10 season gig).  So having just seen the finale of Bones, I was having trouble making the conversion.  Kind of like with Michael Weatherly going from NCIS directly to Bull last year.  Anyway, when the pilot opened with David as Senior Chief Jason Hayes sitting in front of a shrink trying to portray a sailor with PTSD, I felt a little uncomfortable.  For him and for me.  For him, because he has definitely done his research and has had some coaching, but he is not there yet.  He’s still a little awkward.  I liked the little quirks though; the trembling lip, the sweaty palms, and the avoidance etc.  For me…because it’s all too personal and I hope that that is not what I look like.

Senior Chief Hayes is a typical sailor though, in that home relationships are usually very strained at best, and your team is your family.  Mission first.  And speaking of mission, there was very good operational accuracy throughout the pilot.  Director Christopher Chulack (of ER fame), did a great job and obviously had some solid consultants on the set.

All in all, if I had to give this pilot a grade it would be a solid B.  Yes, it’s VERY predictable, and yes, it’s been done before, but I truly believe that this will get great ratings because 1). People are obsessed with the elite military 2). The cast with David Boreanaz in the lead, has amazing chemistry and is already solid. 3). The EP’s, Showrunners, Writers and cast have done their research, and well (and have obviously hired amazing military consultants) 4).  The ‘hair missle,’ everyone loves a good hair missle.

SEAL Team  airs on Wednesdays at 9/8c on CBS.