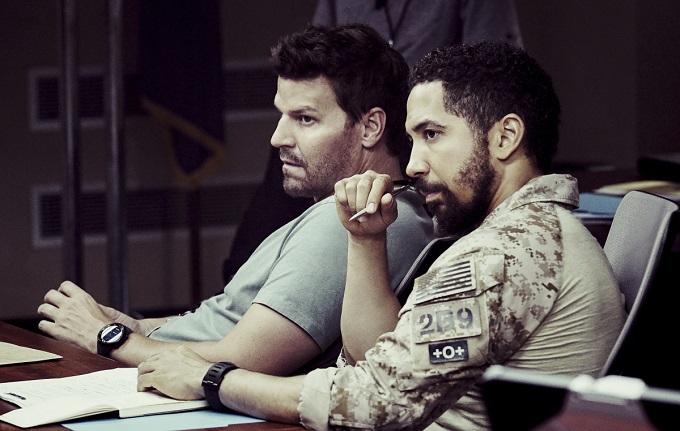 “Boarding Party” — Jason and the SEAL team must rescue a group of researchers being held hostage on a ship in the South China Sea. Also, Clay is ranked in the “bottom five” of his class, jeopardizing his future as a SEAL, on SEAL TEAM, Wednesday, Oct. 11 (9:00-10:00 PM, ET/PT) on the CBS Television Network. Pictured L to R: David Boreanaz as Jason Hayes and Neil Brown Jr. as Ray Perry. Photo: Monty Brinton/CBS ÃÂ©2017 CBS Broadcasting, Inc. All Rights Reserved

I can’t exactly put my finger on why, but this evening’s episode of SEAL Team was a lot better than the previous two.  Even though we are only three episodes into it’s first season, if tonights episode is an indication of where it is heading, then SEAL Team is certainly finding it’s footing and digging in.  In ‘Boarding Party,’ there was an average helping of your typical “shoot ‘em up” scenarios, but we also got to see more of what makes these guys tick.

Im going to start with my new favorite character (Cerberus the hair missle was nowhere to be found in this episode) Sonny (played by the talented A.J. Buckley).  Sonny Quinn is the good ‘ole boy who tends to be the butt of the joke and takes a lot of ribbing from Jason (David Boreanaz) and Ray (Neil Brown, Jr.).  Sonny is billed (in the character bios) as “an exceptional, loyal soldier with a checkered past who still combats self-destructive tendencies.”  We really haven’t seen the self-destructive side yet, but I DO love him.  He’s like a big teddy bear.  In tonight’s episode we found out that he doesn’t like to swim when the guys decide to swim in to the researchers hijacked yacht versus dropping in.  That’s kind of hilarious in itself – a Navy SEAL who doesn’t like to swim.

Jason’s marital issues again take center stage again as Alana finds a burner phone hidden in a toolbox while cleaning out Nate’s garage.  (Nate was part of the team who perished in the line of duty). Alana believes that Nate was cheating on his wife, but Jason defends him and it becomes a source of tension.  Alana asks Jason if he knew anything about it but Jason stands by his deceased team mate.  Alana gets angry because of the secrets that Jason keeps with the team.  She states, “there once was a time when you would have told me.”  Jason secretly has his own doubts about Nate’s motives and goes on a recon mission hoping to clear his friends name. 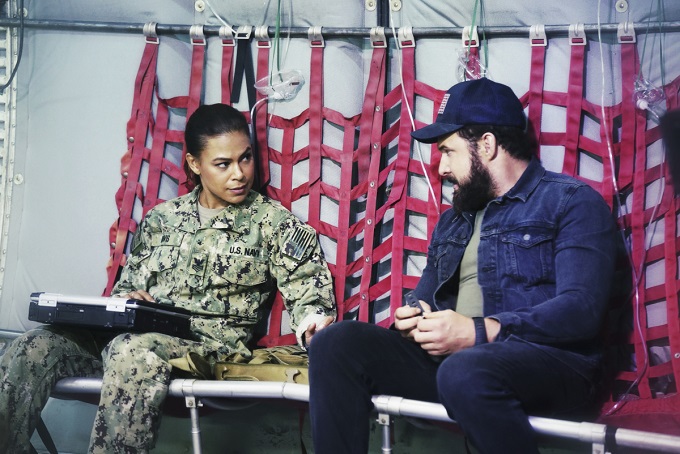 “Boarding Party” — Jason and the SEAL team must rescue a group of researchers being held hostage on a ship in the South China Sea. Also, Clay is ranked in the “bottom five” of his class, jeopardizing his future as a SEAL, on SEAL TEAM, Wednesday, Oct. 11 (9:00-10:00 PM, ET/PT) on the CBS Television Network. Pictured left to right: Toni Trucks as Lisa Davis and AJ Buckley as Sonny Quinn. Photo: Monty Brinton/CBS ÃÂ©2017 CBS Broadcasting, Inc. All Rights Reserved

I really love the mission planning stage that we get to see before the plan is executed.  There we see the development of the plan so we understand how the mission should go.  Of course it never goes the way it should because that would be boring.  And that’s why we call it a military procedural – predictable.  I’m not really a fan of the “shoot ‘em up” parts, but hey, I’m a girl.  I also really like the team’s non-combat members Logistics NCO Davis (Toni Trucks), Lt. Commander Blackburn (Judd Lormand) , and CIA liaison Mandy Ellis.  We have started to see some character development for the girls, but not so much for the Lt. Commander.  But, it’s only episode 3, and (hopefully) there will be a lot more time for that.

One character I love to hate (which means he’s doing his job well) is the second leading man Clay Spenser (Max Thieriot).  He is a real tool and eventually his and Jason’s character arcs will have to intersect, although I think collide might be a more accurate word.  They have had a few interactions so far – none very good.  Right now Clay is still in training, but my crystal ball tells me that he will soon become a Tier One SEAL and more than likely be on Jason’s team.

I’m starting to look forward to next weeks episode, and I hope that the show can keep up the momentum.  CBS picked the perfect time slot for SEAL Team, and it is currently its second highest rated drama only behind NCIS.  Odds are that it will get renewed.

This week SEAL Team gets a solid “A”.

SEAL Team airs on Wednesdays at 9/8c on CBS.