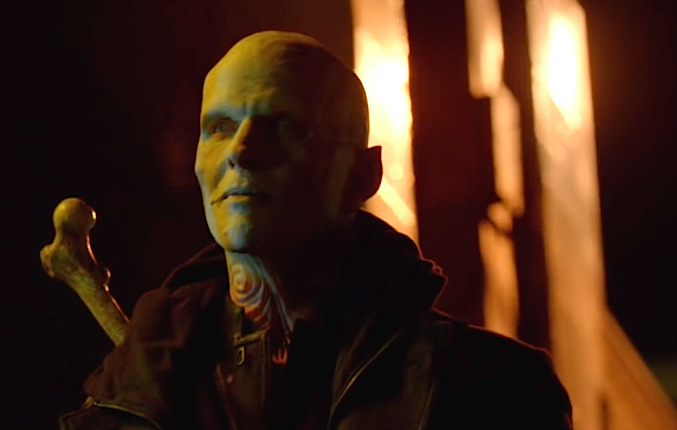 Even with most of the creepy spider children now out of commission, we knew it was only be a matter of time before the big mother/son reunion between Kelly (Natalie Brown) and Zack (Max Charles).  Well, that time finally arrived tonight, and to my astonishment, the bitch of the devil dang near succeeded. Elsewhere, Palmer (Jonathan Hyde)  pitches a fit like a spoiled little boy when he learns he has competition for the purchase of the Occido Lumen. And, we finally get the meet-up that I think every trilogy fan has been anxiously awaiting since Quinlan (Rupert Penry-Jones)  was introduced in “Quick and Painless” — that of Quinlan and Gus (Miguel Gomez).  Ironically, even though Quinlan appears in only this single scene, he clearly steals the show once again as he did in the character’s big episode “The Born” last week.

Sorry for the reference, but with Eichhorst (Richard Sammel) at that dressing table making up Kelly-the-monster into Kelly-the-soccer-Mom, I couldn’t help myself. I think we can now see one of many reasons the Master kept Eichhorst as his 2nd-in-command instead of making him his new vessel. Eichhorst is the only one of the Master’s minions who has any interaction with humans, and so, who else would even have the skills to get Kelly ready for her 1st adventure out in the real world?

Even though Kelly (and Eichhorst!) may get a gold star for being able to mask virtually any hint of being a strigoi, it seems neither she nor Eichhorst did their homework on Red Hook. Tst, tst, tst. As we know, Justine Feraldo is on a mission to clean the place up, which means road-blocks and random searches. Kelly didn’t count on that, and she certainly didn’t count on the police having UV lights to detect the bloodworms. However, just when it looks like Kelly is about to be outed, a strigoi lunges out of a car behind her, and so with sheer luck, she makes it into Red Hook. And, not only her but 2 feelers stashed in the trunk of the car (I thought they all were dead. Those boogers just keep coming and coming!).

In the final moments of the episode, we finally get the showdown that had been building up for most of the hour. Kelly does finally make it to Fet’s loft, and after seeing what appears to be his Mom and hearing her voice, it doesn’t take much persuasion for Zack to unlock the door. Fortunately, Eph (Corey Stoll)  and Nora (Mia Maestro)  are there, because if they hadn’t been, Zack would have been gone and on his way with Mommie Dearest to strigoi-central. Neither of them are really any match for Kelly and her creepy kids, but with some very well-timed luck, the feelers are killed, and Kelly ultimately is scared off, at least for now.

Now I really wonder what is next. Unless she’s got more feelers hiding in the trunk of that car, it appears Kelly is sh*t out-of-luck. Then again, she doesn’t really need them because she knows where Zack is now. And, that brings me to my next question — will this incident finally force Eph and the gang to move on? If so, where could they possibly go? It seems like they’ll have no choice because if Kelly knows where they are now, so does the Master.

SETRAKIAN VS. PALMER — THE BATTLE FOR THE LUMEN BEGINS

For those who are not familiar with the trilogy, in the books Palmer pursues the Occido Lumen at the behest of the Master and uses Eichhorst as his mouthpiece in his attempts to obtain the ancient book. Unless I am seriously mistaken about what we saw tonight, I think we’re about to get another major deviation from the source material (which, by the way, I am all for since I thought the entire Lumen arc in the trilogy was somewhat boring and stale).

First a question: Is it just me, or is Palmer still pursuing the Lumen all on his on, and in fact, keeping it a secret from both Eichhorst and the Master? It sure appears that way because when Eichhorst interrupts Palmer in his meeting with Cardinal McNamara (Tom Kemp), Eichhorst seems to have no clue about what Palmer has been doing.

Eldritch, you know everything that transpires in this office is my business — Eichhorst

Even though Eichhorst wasn’t privy to Palmer’s conversations with the good Cardinal, it doesn’t take him long to figure out what Palmer is after and before nightfall, he’s at St. Benedict’s Cathedral and threatening McNamara with his life unless he tells him where the Occido Lumen is. This is an EXCELLENT scene, and Richard Sammel gives a stellar performance, second only to the scene in season 1 of Eichhorst meeting Setrakian for the first time in jail. Bravo, Mr. Sammel! 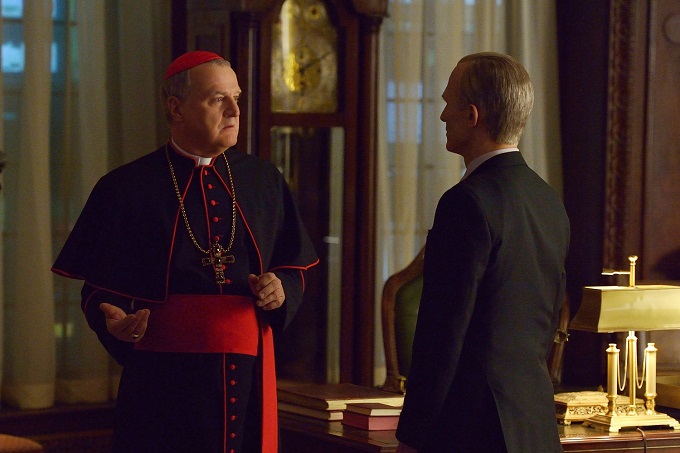 Of course, McNamara doesn’t really have the Lumen and is simply doing the bidding of the person who does have it, which he makes the mistake of revealing to Eichhorst. You see, since McNamara does’t have the Lumen, he’s no longer a real threat because if Eichhorst turns him, the Master will be able to see his thoughts and thus discover on his own who has the Lumen.

With the intent of robbing the Cardinal of the Lumen, Abe and Vasily (Kevin Durand) show up just as Eichhorst is turning McNamara, causing him to flee into the night (now, this is one time that I DID love Fet’s boom-boom antics). However, unlike Eichhorst, Setrakian is a little more skilled at persuasion, or perhaps McNamara sees that of all the people vying for the Lumen, Abraham is the only one with admirable intentions.

Tell me who has the book. Tell me and I’ll release your soul to God, before the forces of vile darkness take it” — Setrakian to McNamara

McNamara does tell, and the person who has the book is the little boy we saw at the nunnery in Austria (I knew that brat kid was hiding something!), which Setrakian responds to by beheading the Cardinal. I think Abraham just won another battle against Eichhorst and the Master. If only Quinlan could see!

But, there’s also one other good thing that comes out of all of this. When Palmer learns of the Cardinal’s demise, he pitches a fit like a rich kid who just had his Rolls taken away, which turns out to be Coco’s cue to kick the man’s wrinkled ass to the curb. Yes, Coco storms out, and if we’re lucky, this will mean no more nauseating bedroom scenes with Palmer in just his skivvies. That’s what I call a win-win.

THE MEET-UP WE’V’E ALL BEEN WAITING FOR — MR. QUINLAN AND GUS. THE SUN-HUNTING “DREAM TEAM”.

Given that Quinlan had a wife at one time, you’d think he would know it’s not polite to interrupt a couple during a romantic moment. Well, I guess he figures the impending vampire apocalypse would warrant an exception because he calls out Gus while he’s kissing and getting cozy with Aanya. As I mentioned at the beginning of my review, this is the only scene we see Quinlan in this episode, but that’s all that is needed because the beloved dhampir steals the show once again.

To be honest, this isn’t the meeting I envisioned for Gus and Quinlan. I suppose I imagined something similar to how Gus met Vaun, and with Quinlan ultimately taking Gus by force. The writers could have done that, but I think that would have been the easy (and lazy) thing to do. Instead, the show’s creative team decided to use this initial meeting as an opportunity to show more of Quinlan’s human side, as well as reveal a shared experience between Gus and the hybrid warrior, one that I predict will forge a strong bond between the two going forward.

What you want? — Gus

“Are you frightened, Gus? — Quinlan

“I don’t care who you are, where you’re from, or what you’re selling. But, if you don’t get away from here, I’ll put a bullet in your head.” — Gus

“If you were going to shoot me, you would have done so already.” — Quinlan

You’d think that Gus learned his lesson with Vaun and not try to fight Quinlan, but of course, he goes all stupid and pops off a shot anyways. Quinlan responds by showing his vast speed and strength, and in less than a second, has Gus pinned against the window of the restaurant, while poor Aanya looks on in horror. At this point, Quinlan could have just said ‘To hell with it!’ and kidnap Gus, but his more human side causes him to pause. He looks up, sees the terror in Aanya’s eyes, and decides that putting the fear of God in Gus’ girl in order to get to him isn’t the right thing to do. God, I’m loving this Quinlan more and more!

“Vaun trained you. Did he ever mention who trained him?” — Quinlan

“Vaun’s a good soldier, but he underestimated the Master. My name is Quinlan.” — Quinlan

“The Ancients, fools they are indeed. I don’t work for them either. I’m merely using them to get what I want.” — Quinlan

“His shadow looms over you. You crossed him, and he does not forget. What has it cost you thus far? Your best friend. Your mother. Do you not see a pattern? <Looking at Aanya> She’s very beautiful. Beauty and love are fleeting but powerful. I’ve known both. I’ve lost both. You can save her, Gus, but the only way is to give her up. Until we slay the Master, that is.” — Quinlan

This last part is very touching but very powerful. We know from the trilogy that Quinlan had a wife and an adopted daughter, who were ultimately killed by the Master because of his “son”‘s denial of his strigoi heritage and his choosing to lead his life as a human. This is the first reference to that family, and honestly, this scene brought tears to my eyes. We see the tremendous hurt and loss in Quinlan’s eyes and hear it in his voice. I believe Gus does too, and I think it’s this one detail that makes Gus pause and consider joining Quinlan in his fight. Gus has lost his best friend, his mother, basically everyone who had been important to him. He understands the pain, and he certainly understands the deep-seated need for revenge, which is obviously Quinlan’s primary motivation. Gus gets Quinlan, he understands him. Because of that, my guess is Quinlan has just succeeded in recruiting the first of his team of sun-hunters.

All in all, another excellent episode, and next to “The Born,” probably one of the best of the series thus far. There isn’t a dull moment the entire hour, and the plot is pushed forward by leaps and bounds. The hunt for the Lumen is officially underway with Setrakian getting a surprising head start, and no doubt there will be another attack by Mama Strigoi, except this time she’ll be more prepared. And, then there’s the Quinlan/Gus meet-up, which while lasting barely 5 minutes, turned an already very good episode into a near-perfect one. Of course, this really shouldn’t be much of a surprise because I suspect **any** scene going forward that spotlights Quinlan — as well as the amazing talent of Rupert Penry-Jones underneath all that makeup —  will most certainly steal the show.