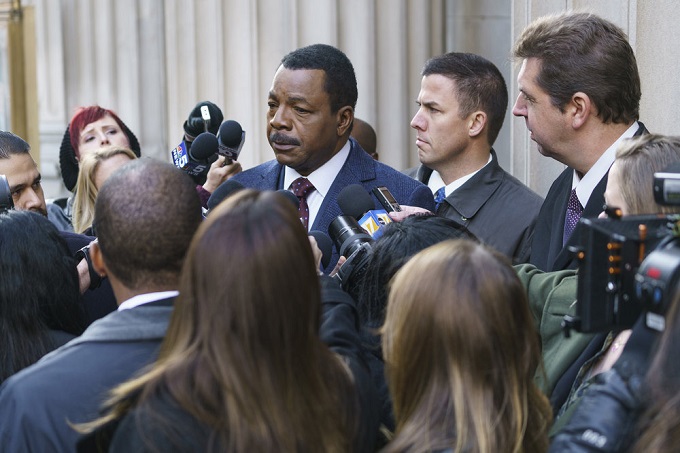 Truth be told, I’ve been a fan of Law & Order — and of the Dick Wolf franchise, in general — for close to 25 years. I can remember watching the show with my parents back when Mike Logan (Chris Noth) was on the beat and Adam Schiff (Steven Hill) was the District Attorney of NYC. Those were some good times, and that was some good TV. So, when the whispers started that there might be a Law & Order reboot, needless to say I was more than a little excited. Unfortunately, nothing ever materialized on that front, but the good news is we may have gotten something just as good — perhaps even better.

Last summer, it was officially announced that the 4th installment of Dick Wolf’s mega Chicago franchise, Chicago Justice, had been given the green light at NBC, and this past Wednesday, we got our first look at the series as the final part of the 3-hour #OneChicago crossover. That was described as a “preview” of the new series, with the actual premiere airing tonight, and if you’re a fan of the original Law & Order, this is something you definitely want to watch.

In tonight’s premiere and as a crossover with Chicago P.D., Stone (Philip Winchester) and the State’s Attorney team investigate the chain of events following the arrest and death of a young man while he’s in custody. The man’s name is Justin Wilkes, and he’s arrested by Officer Kevin Atwater (guest star LaRoyce Hawkins) on a drug charge. The episode opens with Assistant State’s Attorney Anna Valdez (Monica Barbaro)  visiting another inmate, Adrian Carrera (guest-star Sal Velez Jr.), whom they are prosecuting for assault resulting from his involvement in a bar fight. She delivers the bad news that the man Carrera beat up has just died, and so, they’ll be bumping the charge to 1st degree murder. Carrera doesn’t seem too phased by the news and instead, just bitches about Wilkes in the adjacent cell and how he threw up on him. Valdez gazes at Wilkes and notices that he’s sweating and shaking, and she — as well as most of the viewers — probably attributed that to possibly coming down off of a drug high.

This couldn’t be further from the truth, because the next thing we know the State’s Attorney’s office learns that Wilkes has died. With Dawson (Jon Seda) and his partner, Laura Nagel (Joelle Carter) sent to investigate, that’s when things begin to get hairy. According to the coroner, Wilkes died from his aorta being torn by a fractured rib, which was likely caused by some blunt force trauma to the chest. It was a slow bleed, and it probably took 6-7 hours before Wilkes bled to death. This definitely could have been caused by excessive force during his arrest, but when they interview the medical personnel, it gets far more complicated. The EMT’s who responded to the call at the 21st Precinct didn’t view Wilkes’ condition as critical, and so, they decided to respond to another call of a boy who had fallen into a lake before taking Wilkes on to the hospital. Then, at the hospital, Dawson and Nagel learn that Wilkes had to wait yet another 6 hours before receiving treatment. By then, it was too late.

So, now what? Who is to blame and whom do they charge? Well, they really don’t know, and so, Stone decides to take everyone — Atwater, the EMT’s, and the hospital staff — to the grand jury and let them sort it out. To top it off, Stone learns that his father’s former partner at the NYC District Attorney’s office, Paul Robinette (guest-star Richard Brooks), is now a defense attorney and will be defending Atwater. And, boy, does Robinette see through Stone’s little “scheme” from the get-go. The fact that Stone is trying to indict multiple people indicates that the State doesn’t believe Atwater is completely responsible for Wilkes’ death, but the problem is Stone hasn’t admitted that; so, Robinette has to find another way to get this on record. How he does this is utterly genius.

Before the grand jury returns with any indictments, Robinette files what is called a motion to preclude grand jury action. Robinette argues that even if Atwater isn’t indicted, the mere grand jury action could irreparably harm his career at the Chicago Police Department. Robinette’s motion is ultimately denied, but in the reading of her decision, the judge does mention the fact that the State’s Attorney’s office has “multiple targets.” And, what is the importance of this? It has now created **reasonable doubt**. To everyone’s surprise, the grand jury returns with a single indictment against Officer Atwater, but no worries. It’s not over til it’s over because Robinette now has some pretty good ammunition going into trial. 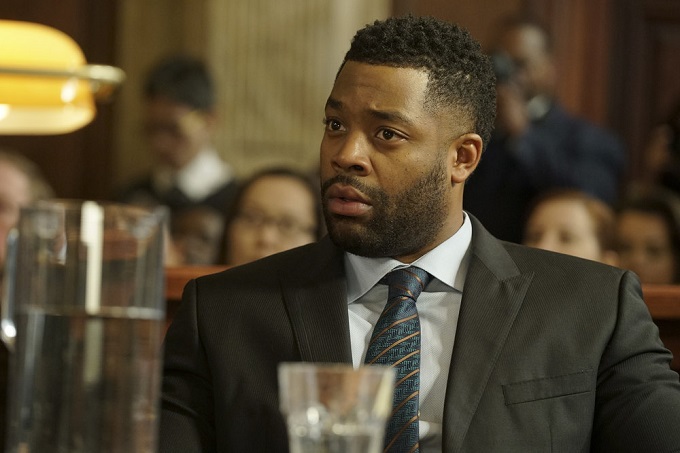 Now, about that big elephant in the room — what happens to Atwater? Before I get to that, I will say this episode had perfect timing. With Ruzek abruptly going undercover earlier in the season on Chicago P.D., the opening in Intelligence was filled by Kenny Rixton from the gang unit. Well, after Ruzek’s return 2 weeks ago, Rixton stepped back out, supposedly after a position opened up in Narcotics. Even though Rixton only appeared in a handful of episodes, he quickly became a fan favorite, and many viewers are hoping he’ll make a comeback. Well, guess what? Officer Atwater being convicted of murder would definitely provide an opening on Voight’s team for that to happen.

I was actually quite fearful that was where this was heading, but fortunately, Atwater’s former colleague, Antonio Dawson, pulls through and makes a startling discovery that blows the case right open. By now, Atwater had already accepted a plea deal for involuntary manslaughter and made a statement to the court. So, if Dawson had made this discovery just a day later, it would have likely been too late. The key is both the EMT’s and the hospital personnel had described Wilkes as being drunk. Even though no toxicology tests had been performed, basically everyone described Wilkes this way — everyone except for Atwater. Well, if this is correct, that means something happened after Wilkes had been booked but before the EMT’s arrived to take him to the hospital. And, that leaves only 1 person — that other inmate, Carrera, who also tried (and failed) to make a deal with the State’s Attorney’s office to testify against Atwater for a reduced murder charge. 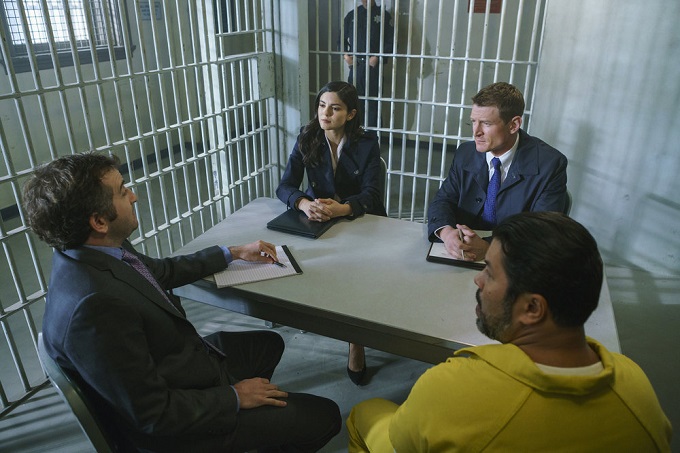 Once Carrera is confronted by Stone and Valdez, his little house of cards immediately crumbles. Carrera and Wilkes were originally in the same cell, and when Wilkes refused to give Carrera his cigarettes, he punched Wilkes in the chest. Oh, yes, Carrera killed Wilkes all over a pack of smokes. Unbelievable. This leads to Atwater’s plea deal being vacated and all charges dropped. The entire situation had really put a strain on Atwater and Dawson’s friendship throughout the episode, with Dawson being forced to help gather evidence to convict Atwater as part of his new job at the State’s Attorney’s office, but at the same time, trying to do right by his friend. But, after it is all over, Atwater and Dawson’s eyes do meet in the courtroom, and a faint smile appears on both of their faces. This gives us hope that both of these men will be OK going forward. At the end of the day, Dawson is all about the truth, and it is that truth that ultimately exonerated Atwater.

As I had mentioned in my Advance Preview, if you’re a die-hard Law & Order fan, this new series (and most definitely this premiere) won’t disappoint, because after only the “preview” episode on Wednesday and tonight’s premiere, there’s already 3 major callbacks to the series that helped put Dick Wolf on the map. First, if you watched Law & Order back in the days of Jack McCoy as the Executive Assistant District Attorney, you may recall a tough-as-nails defense attorney by the Danielle Melnik, portrayed by the fabulous Tovah Feldshuh (“The Walking Dead”).  Well, the judge presiding over the arson case in Wednesday’s “preview” episode was actually none other than Ms. Melnik — um, I mean the Honorable Danielle Melnik. 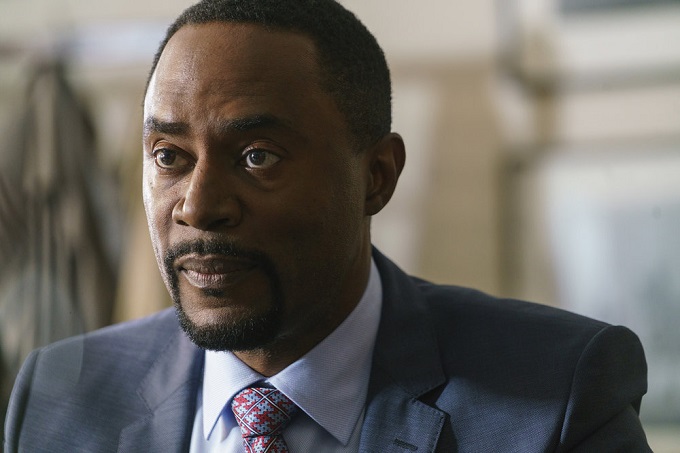 Then, of course, we have the Assistant State’s Attorney, Peter Stone, who just so happens to be the son of Ben Stone, the District Attorney for the first 4 seasons of the Law & Order mothership series. As we learned in tonight’s episode, the father-and-son relationship has been quite rocky, and the two men actually haven’t spoken for many, many years. The final blast-from-the-past comes with Richard Brooks, of course, reprising his role from the Law & Order days as Paul Robinette. I didn’t start watching Law & Order until both Ben Stone and Paul Robinette were gone, but I have watched re-runs, and the entire situation feels so nostalgic. Law & Order began its run in 1990, and now, some 27 years later, we have Ben Stone’s son, Peter, as the lead on a new Dick Wolf series and working alongside the Sr. Stone’s former Assistant DA, Paul Robinette. And, if you’re wondering — oh, yes, they do have some stories. While Ben Stone may have come across as very tame and soft-spoken in the original Law & Order, we learn tonight he is somewhat of a bull-dog behind closed doors and more or less, a pain in the ass to be around at times.

That’s his special purpose in life. To make everyone take note of their imperfections — Peter Stone to Robinette on his father

Even with Robinette’s own strong feelings about Stone Sr., he does advise Peter to end the estrangement — and in the final moments of the episode, Peter does take that advice. He calls his father, and while we don’t hear what is said, we can assume it’s the beginning of a reconciliation. Does this mean we might be seeing Michael Moriarty making a guest appearance as Stone Sr. on Chicago Justice in the near future? With all the tie backs to the original Law & Order in just the first 2 episodes, it definitely wouldn’t surprise me.

Chicago Justice  will now air on Tuesdays, with the next episode this Tuesday, March 7th, at 10/9c on NBC.