Forgiveness, Redemption, And A Return To The Classic Herd In The Walking Dead “First Time Again” 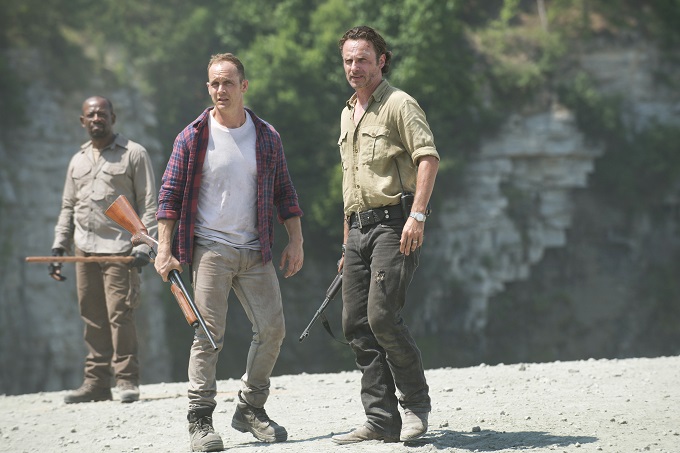 Warning: Spoilers ahead for those who have not seen the season 6 premiere

There had been scores of complaints from viewers last season that there wasn’t enough walker-slasher action in the series lately and that the zombie drama had morphed into a semi-soap opera with boring characters and boring story lines. Executive Producer Scott Gimple responded to these complaints by promising that season 6 would be taking a “back-to-basics” approach with the walkers becoming the primary threat once again. Well, I applaud Gimple for that statement because season 6 has certainly hit the ground running, with the opening scene depicting perhaps the biggest herd we’ve seen in the series to date.

Ever since that epic, but heart-breaking, season 5 finale in March, there’s been a buzz about whether season 6 would start immediately where the finale left off or whether there’d be a time jump. The end result was a hybrid of the two with the premiere interlaced with scenes from present day (presumably weeks or months from the time of the finale) and flashbacks of key moments leading up to that time. First, yes, don’t feel bad if you’re a little confused initially because I was too. But, once you realize that black and white are the visual cues for the flashbacks, you’ll immediately see the brilliance in this direction taken by the writing team.

ALEXANDRIA SAFE ZONE AND THAT MEGA-HERD IN THE BACKYARD

If you’re like me, you may have wondered how in the hell these people in Alexandria survived so long. Yes, they have their walls, but they wouldn’t withstand not even a small to moderate walker attack. And, we all know that no one in the safe-zone knows how to fight walkers worth sh*t. So what gives? Well, as it turns out, Alexandria is fortunate enough to have a giant rock quarry around its perimeter, which also serves as a very convenient walker trap for any biters that venture too close to the walled community. The only thing the Alexandrians had to do was to close off any potential areas of escape from the quarry which they did with several semi-truck trailers.

At first glance, this is kind of cool. It’s a naturally-made walker safeguard, and so, ultimately, these people had to do very little to protect themselves from the walker threat on the outside. The only problem is these walkers have been building up in the quarry for no telling how long. The numbers are now in the thousands, and it’s only a matter of time before there’s enough to break through the barricades. Then, all of a sudden, you’ll have the mother of hordes heading straight to Alexandria. 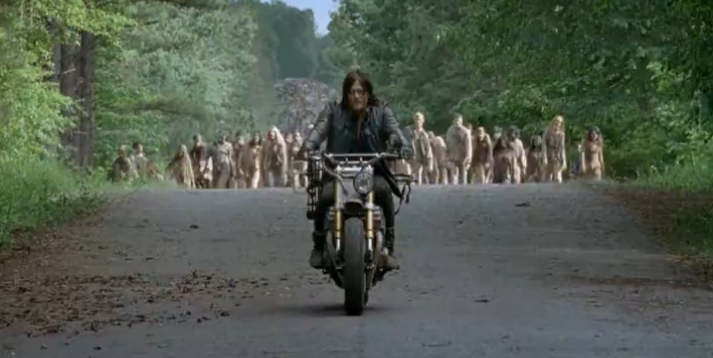 So, what is Rick’s (Andrew Lincoln) answer to this? His solution is in a very careful and concerted progression, lead all of the walkers out of the quarry and in a direction away from Alexandria. When I first heard this plan, I will admit I thought it was insane. In fact, insane times 10. What are they thinking, man! Nobody in this group has any idea of how to really control a large herd, and it only takes a single distraction to get the horde off course and heading straight for you. But, they decide to run with it anyways, and to my surprise, it actually works — well, at least initially. With the use of flares to guide the herd along in a single file, and then, Daryl (Norman Reedus), Sasha (Sonequa Martin-Green),  and Abraham (Michael Cudlitz)  driving ahead and leading them away, for a moment it looked as if I was about to be shown up.

But, then that one distraction I had talked about happened. A very loud horn directly from Alexandria begins sounding (is this perhaps their emergency siren?), and of course, the horde begins to veer off the road and straight for the safe-zone. So, now the controllable single file of walkers has now become the very uncontrollable blob, and it’s heading for the very people Rick is trying to protect with this scheme.

That’s present day. Now, let’s take a look at the flipside of flashbacks to see how we got there.

FORGIVENESS, REDEMPTION, AND COMING TOGETHER

Let’s start with Rick, Jessie (Alexandra Breckenridge),  and Ron. First, just because Pete Anderson is now dead, that doesn’t mean his family is ready to go and play house with Rick. In fact, it’s quite the contrary. Jessie makes it very clear that while Pete may have been a wife-beating monster, there’s a monster lurking in Rick as well, and frankly, she doesn’t want Rick anywhere near her family, especially her children.

Rick’s case doesn’t improve when he insists that Pete’s body not be buried in Alexandria’s cemetery and instead, somewhere outside the walls. Several Alexandrians including Tobias disagree but Deanna (Tovah Feldshuh)  has the final say and of course, sides with Rick (hey, the man killed her husband. What would you expect?) So, Rick and Morgan (Lennie James)  are tasked with taking Pete’s body to the show’s equivalent of a potter’s field. What they find on this little trek is far from what they expected.

After Rick hears what seems to be a large group of walkers, he follows the sound and what he sees is beyond shocking. Here, Rick gets his first glimpse of the very rock quarry described in the first part of this review.

But, Rick has a plan, and with a theme of forgiveness, redemption and unity very similar to that in the season 5 finale, the town slowly comes together to support Rick in his quest to rid Alexandria of its ticking walker bomb sitting in its own backyard. Even though the look on Glenn’s (Steven Yeun)  face makes it clear he is 100% against it, Nicholas (Michael Traynor)  joins Rick’s team for this so-called Zombie Parade. While I don’t think Nicholas has what it takes to survive for the long haul, he does prove to be very useful in this episode, and my guess is we’ll see this guy redeeming himself before he takes his final bow.

We also are introduced to the first new character of the season, Heath (Corey Hawkins),  as he is another Alexandrian who steps up to join Rick’s team. Heath is my favorite character in The Walking Dead comics, and so, naturally, I was a bit nervous with how he would be portrayed in the television series. However, Corey Hawkins does a stellar job, and virtually all of my doubts have been put to rest. My only complaint at this point is there need to be more Heath scenes, and oh, his better half from the comics, Dr. Denise Cloyd, needs to show up very soon (and, we know she will since it’s been confirmed that the character has been cast). 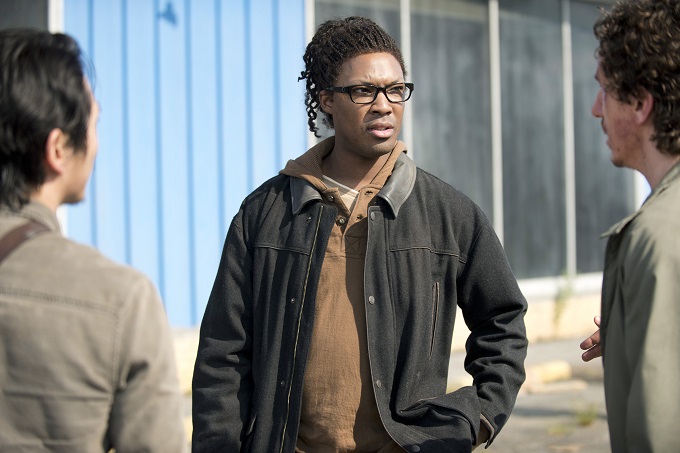 Basically all of Alexandria comes together behind Rick with the exception of one — newcomer Carter (Ethan Embry).  He thinks all Rick is going to do is get everyone killed (and he may not have been completely wrong about that), and in fact, attempts to put together a mutiny which is very comically exposed by our good ‘ol Eugene (Josh McDermitt).

We kill him before he kills us — Carter

Once his betrayal is exposed, anyone else would have probably executed the guy, but Rick spares him, and in fact, allows him to join the team. Even so, I think Rick probably knows that Carter doesn’t have the skills to survive very long outside the walls, and in fact, he doesn’t. Carter is the one character killed in the operation to clear out the quarry, when Rick is forced to put him down after he’s bitten. RIP Carter for your 1 episode Walking Dead claim-to-fame.

Lastly, what about Rick and Morgan? It’s great to have Morgan back in the mix, as he sees the transformation Rick has undergone better than anyone else. Rick and Morgan know the terrible things they’ve had to do to survive to this point, but both see glimpses of the humanity that remains.

We’ve got to get to know each other again. For the first time again — Morgan to Rick

While both still have a long way to go before they truly can see eye-to-eye again, by the end of the episode, we see they’ve made big strides towards that goal. In a very touching scene, Morgan holds Baby Judith, and Rick invites Morgan to stay in the same house as his family. This is a big step and definitely one in the right direction. 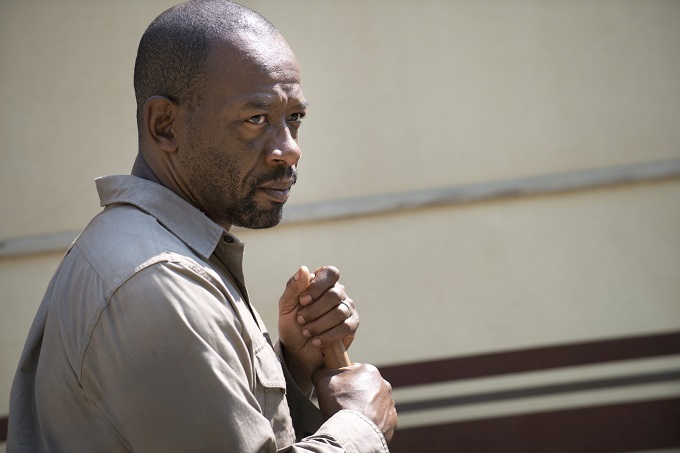 All in all, this was one hell of a premiere and one that I don’t think fans will forget anytime soon. So many viewers complained that the 90-minute season 5 finale was slow and somewhat boring. Well, I think the creative team answered that complaint loud-and-clear with the entire 90 minutes of the season-opener being virtually non-stop action. The fans wanted more walkers and more action — well, I think they just got both in spades.

Second, the premiere ends with a major cliffhanger, which actually isn’t very common for The Walking Dead. When the show has ended an episode with a cliffhanger, it’s been in a finale, the most recent one being the Terminus shocker at the end of season 4. But this is the beginning of the season, and having something this big, this shocking with the season barely out of the gate is totally unexpected.

And, of course, I have to mention the surprising turn of events for the Ethan Embry character. This is the one thing the show’s PR team played very well. Embry is one of the few actors cast on the series that was already known, and so, naturally, the fandom assumed he would have a big role in season 6. In fact, the Executive Producers even hinted as much. Little did we know that his character would be killed off before the end of the premiere episode. This, no doubt, was a sucker-punch to all of Embry’s fans out there, but it still was a great move because it had a genuine element of surprise.

So, what does everyone think next week’s episode holds for us? Why was the horn sounded at the safe-zone? My gut says a possible attack by the Wolves which would seriously blow since the group’s strongest fighters are out working the project at the quarry. Either way, expect another very intense episode come next Sunday.

This episode was also full of some truly fantastic quotes. Here are some of my favs: