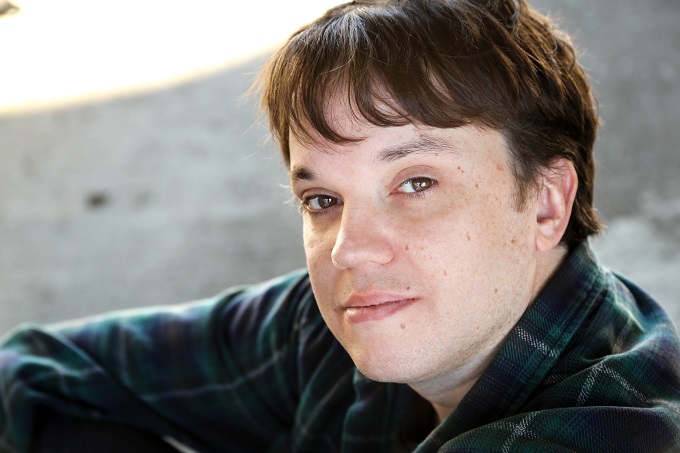 Now that Zack Addy is officially back on Bones and that shocking Season 12 episode has aired, I must admit that the writers and FOX did an impeccable job of keeping the fans guessing with respect to Zack’s guilt. The promotional photo of Zack holding a syringe over Dr. Brennan? Now, that was rich. That photo alone caused the fandom to keep buzzing for the better part of a month. And, then, when Zack tells Dr. Brennan “You are used to me being your assistant, always listening to what you say. Now, you listen.” Holy crap! When I watched that for the first time, my jaw dropped, and more than a few curse words came out of my mouth. I watched the fan reaction on Twitter tonight during the episode’s East Coast airing, and the response was just amazing. Most of the fans — even the die-hard Zack Addy fans — had him pegged as The Puppeteer, and that’s a testament to the exceptional writing of the episode.

As for me, I never really doubted Zack was innocent, but even still, it was just as exciting to see it all play out. Perhaps my favorite part of the episode was the fact that the one person who advocated the most for Zack was also the one whom Zack didn’t see as a friend — Agent Booth (David Boreanaz). And, I loved even more the ending where Booth says he doesn’t believe Zack killed the lobbyist and that he would help proving it. We won’t see Zack again until Episode #11 and while I don’t want to wish the show’s final season away, I have to admit I can’t wait to see how it all turns out.

The good news is you don’t have to wait until the end of the season to get a few deets of what to expect. As I had mentioned in the Advance Preview of tonight’s premiere, I interviewed Eric Millegan before Christmas and below is the 2nd part. Here he discusses tonight’s fantastic season 12 premiere, returning to the series, and teases what’s next for Zack. Check out what he had to say.

TV GEEK TALK: When you were approached about returning to the show or when you arrived on set to film that single scene for Season 11, how much were you told about Zack’s overall storyline going into Season 12?

Eric Millegan: ” I was kept completely in the dark. All I knew were those 2 lines [from the Season 11 finale]. ”

Eric Millegan: “No, they didn’t tell me a thing. BTW, in case you don’t get to it, you know you started the whole Bring Back Zack movement, and the website that’s still out there, and the Twitter handle (@BringBackZack) that’s still out there. I have to thank you for the effort you put in, and I don’t think that fell on deaf ears, and I think it had a lot to do with these producers bringing me back. So, thank you!”

TV GEEK TALK: Well, thank you, Eric! I’ve always loved the show, but Zack was just one of those characters who made the series extra-special. It’s so exciting to finally get Dr. Addy back and in such an incredible way.

Eric Millegan: “Thank you so much, Mary!”

TV GEEK TALK: So, you didn’t even know about the lobotomy part? I mean, that was teased quite a bit in post-Season 11 interviews, especially by you.

Eric Millegan: “I knew nothing, nothing at all! [Laughs]”

TV GEEK TALK: I personally thought the Premiere was a great story. Bringing Dr. Sweets into it, and then, Zack hacking everyone’s email after Sweets was murdered. In my opinion, everything just fit. This being said, do you know how far back they started planning Zack’s return?

Eric Millegan: “Well, they got new showrunners. Hart stepped away from the show, and then, Stephen Nathan did as well. So, last year or maybe the year before they hired Jonathan Collier and Michael Peterson to run the show. Peterson as a writer and Jonathan Collier as a Director. I think about a year before I knew the casting director, Rick Millegan, he knew there was a plan for it to happen, but he couldn’t tell anybody. It was something that was going to happen, and it was something they were really getting excited about doing. I found out in January 2016, almost a year ago. I got an email from my agent, saying the casting director, Rick Millegan, had contacted them and wanted to know if I’d be available to do a 2-episode arc at the end of Season 11. I think this was before Season 12 was even going to happen, and they didn’t know if they were going to get another season or not. I think [originally] they were going to resolve Zack’s storyline in 2 episodes at the end of Season 11. Once Season 12 was [a go], they decided to just do one at the end of Season 11 and then, bring me into Season 12.” 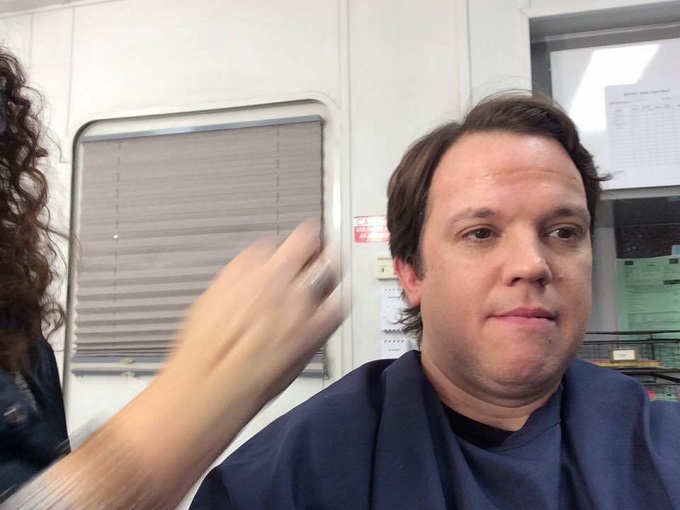 TV GEEK TALK: Ah, okay. I just thought they might have been planning this even further back, possibly even as far back as when Sweets was killed off. That was like 2 years ago, right?

Eric Millegan: “Yeah, John Francis Daly is a screenwriter as well. He wrote the remake of ‘Vacation,’ and then, they asked him to direct it as well. So, he was going to need time off to direct it. Of course, this is just what I read on the Internet, and you never know what happened in real life. What I read is he wanted to direct, and he wanted to leave [Bones] temporarily. But, they felt it would be hard to write his character out and then, bring him back. So, they decided to kill him off.”

TV GEEK TALK: So, is the next episode you’re in (Episode #11) to revolve around the case of lobbyist? What can you tease about that?

Eric MIllegan: “Yes, that episode is about the lobbyist and fully resolves my storyline. A lot happens in that episode, and it’s not just about Zack. I worked 1 day on it. We did all my scenes in 1 day, and it resolves Zack’s story.”

Besides episode #11 being quite Zack-centric, it was reported by Entertainment Weekly that it will also feature Cam and Aristoo’s wedding (finally!). I did ask Eric about this, and he WAS able to confirm that this is true. But, don’t expect to get any other teasers for the episode. Aside from the details I just shared, the episode appears to be quite under wraps and top secret.

TV GEEK TALK: Now, I know what MY favorite scene or part of the S12 premiere was (Zack being outed as Alexander Bancroft and trying to help Hodgins get the feeling back in his legs), but what was YOURS?

Eric Millegan: “My favorite scene was actually the most challenging. It was the last scene I shot, and it was with John Boyd, who plays Aubrey. And, he came in, and he talked to me. It was the heaviest scene in terms of dialogue, and I had a lot of lines. It felt the most satisfying as an actor. I was really able to let go of the lines so that I wasn’t thinking of them in advance. It’s a really exciting place to be as an actor, and I’ll be excited to watch it to see how it turned out. But, it was really fun because I felt like I was completely transformed into the character and completely lost in the character and not premeditating what I was going to say next or what was going to happen next. It was a very satisfying scene to work on.”

TV GEEK TALK: With your entire tenue of playing Zack Addy on “Bones” from beginning to end, what has been your fondest moment or memory?

Eric Millegan: “Wow, there are a few. There’s the first episode after the Pilot ‘The Man in the SUV.’ It was just a great episode, with everybody just excited to be working together. Then, working on that first season Christmas episode was a lot of fun too. It’s what they call a bottle show, when the entire episode is shot on one set. We didn’t go out in the field or outside at all. The entire episode was shot on Stage 6 at FOX where the Jeffersonian Lab is. That episode (‘The Man In The Fallout Shelter’) was really fun to work on. It was directed by Greg Yaitanes, who also directed the Pilot, and so, he was fun to work with. That episode is most definitely my fondest memory.” 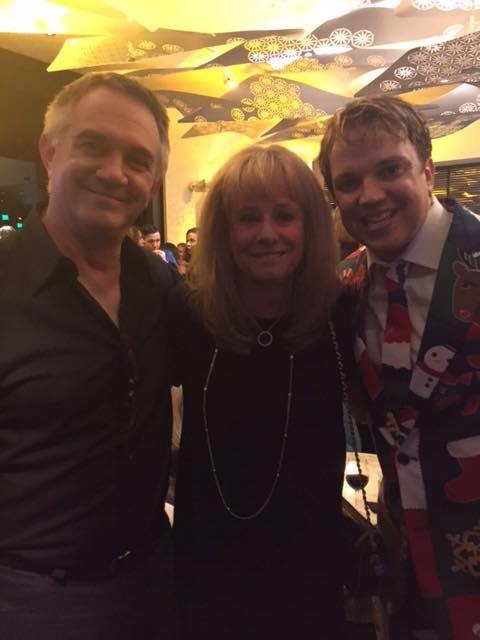 TV GEEK TALK: After you filmed that final episode, that final scene and then also at the Wrap Party, what was it like knowing all of this was coming to an end?

Eric Millegan: “The day we finished and I finished my last scene I said, ‘Wow, that’s it.’ And then, they announced ‘Wrapping on Eric Millegan for the series’ and everybody applauded. It was all very exciting. As for the Wrap Party itself, it wasn’t really sad, and actually, I was happy because it was so great to see some of these people. I haven’t seen Hart Hanson in over 6 years. 6 years. It was great to see Kathy Reichs whom I haven’t seen in a long time. To see the other actors and the actors who play the squinterns, and I got to talk to them. I got to talk to Ryan O’Neal. I got to talk to Stephen Fry. So, it was really a fun party and a fun chance to talk to people. Of course, it really hasn’t sunk in that it’s over yet because [the episodes] haven’t aired. That will all come in the next couple of months.”

Bones airs on Tuesdays at 9/8c on FOX.