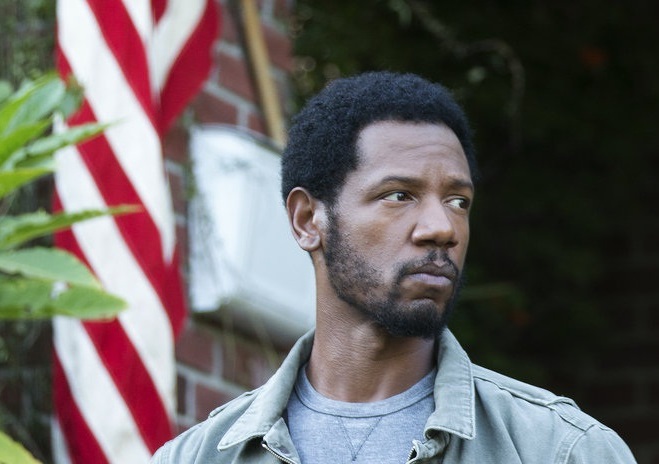 I absolutely loved season 1 of Colony and counted it as one of my favorite new shows of 2016. So, as you can imagine, I’m beyond thrilled that the super-long hiatus is finally over, and the series returned for season 2 tonight. However, if you go back and re-watch season 1, one of the big things that is glaringly missing is an account of that first day of the Arrival. Sure, we have an anecdote here, an anecdote there, but no real scenes or visuals that brought that horrific day to life. Well, as it turns out, that may have been part of the plan from the get-go, with most of tonight’s season 2 premiere being a flashback to that fateful day just over a year ago.

After having covered several of Carlton Cuse’s other shows, I have come to describe the showrunner as “the master of the flashback.” Take, for instance, FX’s The Strain. The series just wrapped up its third season this past October, and even after almost 3 years, there were still a couple of flashback episodes. They were perfectly placed and always told a great story that either moved the overall plot forward or put a character’s actions into perspective. Cuse’s use of flashbacks in the season 2 premiere of Colony is no exception, and in my opinion, was a brilliant way to kick off the new season. Instead of diving right in where season 1 left off (which is what most series would normally do), we go back to where it all started and see how our characters got to the pivotal points they found themselves in at the end of last season.

The episode begins with a typical day for the Bowman family. Katie (Sarah Wayne Callies) making everyone breakfast. The kids getting ready for school. And, Will (in a 3-piece suit, no less!) about to leave for work at the bureau. We learn he has a partner named Devon  (guest-star Carolyn Michelle Smith) whom he suspects may have gotten herself dirty, and as a result, decides it may be time to ask for a transfer. That’s Will’s plan for the day, and so far, there are no indicators that his plans may be thwarted. But, then, Devon arrives to pick Will up, and as they are driving into downtown L.A., boom, you see them. Multiple spaceships descending to Earth in the morning sunrise. The Arrival is officially happening. 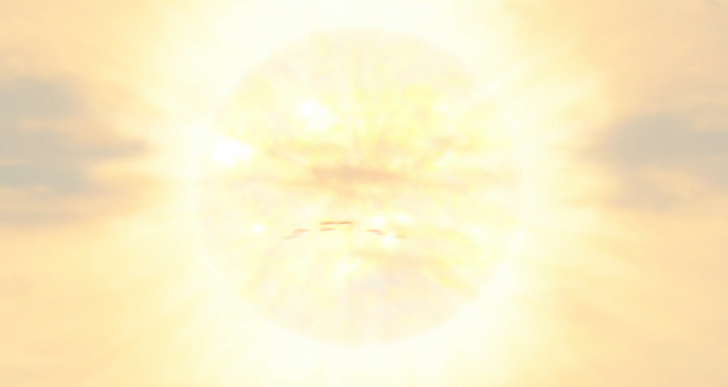 The remainder of the episode is shown through the eyes of the main characters as they attempt to process the horrifying chain of events that transpire over the next 24 hours. Even though we never got to see that first day of the Occupation, numerous clues can be found throughout season 1 of how it all went down, and all of those little hints we finally get to see play out. Take Broussard (Tory Kittles), for instance. He said he had just gotten back from a deployment on that day and also that his mother died from the shock. In tonight’s premiere, we see all of that firsthand and also how coincidence — or perhaps a twist of fate — had the jet-lagged and thirsty Broussard wonder into The Yonk to strike up a friendship with Katie which, as we all know, will have serious implications later on.

We also learn a great deal about former Proxy Snyder (Peter Jacobson), and I will say it’s not what you would expect. I was expecting a lying cheat who was a jerk to his wife and daughter in his old life, but as it turns out, the wife is more of an ass. She’s overbearing, seems to care about nothing but money, and she is very persistent about keeping her ex-husband away from their daughter. As for Snyder’s professional life, Snyder stated in season 1 he was the Provost of Stanford University when, in fact, he was just the purchasing manager for a second-rate community college, and just hours after we see spaceships descend into the atmosphere, he gets a visit from some “textbook publishers” who really turn out be representatives from the Institute for Global Advancement. In other words, they are recruiters for the Host, and according to their algorithms, Snyder is a good candidate for one of their top positions. Well, at first Snyder doesn’t bite, but when they very bluntly state they know he’s been embezzling money for years to pay for his house and his daughter’s very expensive private school education, he is quickly persuaded.

As you may also recall from last season, Snyder said he did actually see one of the Hosts, and we learn from the subsequent scenes that he wasn’t lying. He is quickly taken to what appears to be a military base, is given a headset, and then led to a very cold building or compartment (possibly because very cold temperatures are the Host’s natural environment?). He then stands face-to-face with one of the visitors, and the look on his face at that first meeting is priceless. The episode actually spends a lot of time on Snyder, and that should be a fairly good indication that he’ll likely play a big role in the new season, regardless of his demotion in the season 1 finale. 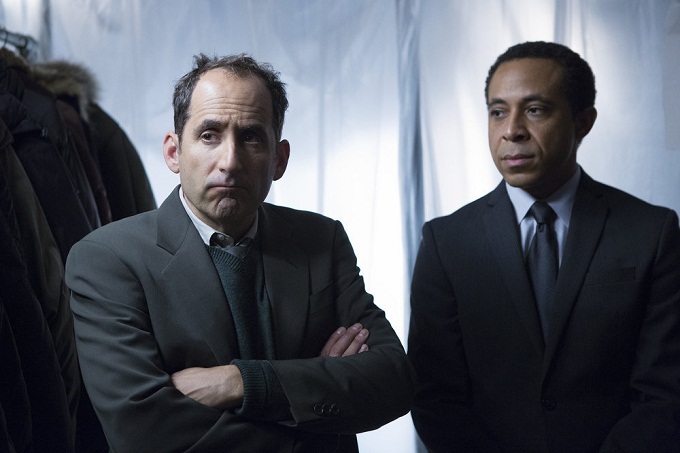 However, the bulk of the episode is devoted more to the Bowman family, particularly Will. We see him in his old job at the bureau as the events of the Arrival play out over the course of 1 day, and we are also learn more about his former partner, Devon. As I had mentioned, the two had somewhat of a rocky professional relationship towards the end, with Will accusing Devon of taking money from the Armenians to finance the new home she was in the process of buying in Santa Monica. She claims her uncle gave her the money for the down payment. Will doesn’t seem to really believe her. In the end, however, it doesn’t really matter because the sh*t is about to get real and talk about relatively trivial things like dirty Armenian money was about to become a thing of the past.

Will and Devon are called back to the office, and when they arrive, it’s utter chaos. Seven VIP’s had vanished overnight, and they were starting to suspect a coordinated terrorist attack. Their job is to locate these people, and so Will and Devon head to the residence of one of the missing VIPs, Tim Lawes. What they stumble on is a crime scene. There’s a bullet hole in the front window, and the housekeeper is on the floor dead. At first they think the kidnappers were successful in snatching Lawes, but then, Will notices a camera. Apparently, Lawes has a panic room, and his housekeeper was able to slow the attackers down long enough for him to make it inside. While Lawes is reluctant to talk, he does finally reveal what he believes may be the attackers’ motive. As it turns out, Lawes is a Lockhead engineer, and he’s one of 1200 people on a special “list.” In the event of a catastrophe, they are all sequestered. Why? Because if society ends, they’re responsible for rebooting it. Wow. So, what exactly does this mean? Of course, Will and Devon have no idea (yet), but we can certainly speculate. It’s likely at least some people knew of the pending Arrival and decided for whatever reasons, not to fight, to make the “transition” as smooth as possible. Of course, to make that happen, these 1200 people who could potentially put society back together again would need to be eliminated. 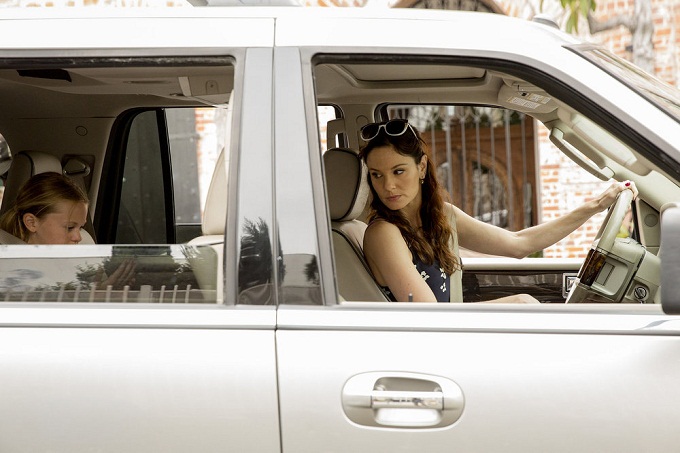 When they arrive back at the bureau with Lawes, the situation had gotten much worse with even more VIPs gone missing (also, anybody else notice that the 2 men who recruited Alan Snyder were there, like as Agents themselves? Oh, yes, there were Collaborators before the Hosts even landed!). This is when Devon officially wigs out and decides her “survival instinct” is telling her to get the hell out of dodge, which is exactly what she does. Even though Will thinks Devon may have overreacted, he gets his wake-up call shortly after when the entire city loses power and goes dark. We are then cut to Katie who has just picked up Gracie from school, and her car, along with everyone else’s in the city, loses power. She then gets a call from Will, who is now quite worried himself, and he tells her to bring the kids and meet him at The Yonk.

Katie manages to get to Bram’s school on foot, but with Charlie over 10 miles away, she has no choice but to take the 2 children she has and meet Will, as he had instructed. Of course, it is now nightfall, and Katie’s in a panic because of Charlie, but Will says he’ll take the mountain bike and get to Charlie one way or the other. However, that may be easier said than done because as soon as he steps outside, it’s a scene that should be all too familiar from season 1. The Host’s drones are already flying everywhere. Buildings are being bombed. People are crying and screaming. Then, out of the sky comes that massive wall, piece-by-piece, surrounding downtown Los Angeles. Note the timeline. All of this happened, start to finish, in less than 12 hours. From the morning sunrise when the ships entered the Earth’s atmosphere until nightfall when all the transition’s new leaders had been selected and walls erected to form the major blocs. It was coordinated. It was efficient. Again, it’s something I definitely think had been planned for and expected for quite some time. Regardless, whether by car or mountain bike, that Wall now made it impossible for Will to get to Charlie in Santa Monica. 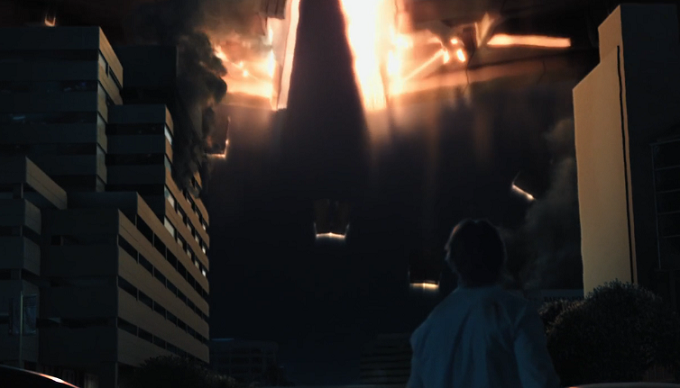 Well, at least until an outgoing Proxy gives you a transit pass. Yes, now we are cut to present day with Will desperately looking for Charlie in the run-down, impoverished Santa Monica Bloc. You may have wondered why Will’s partner, Devon, had been introduced and why she had such prominent role in tonight’s episode. Well, you are about to find out. After Will is stabbed while trying to track Charlie down in a local gang, he finally goes to Devon’s last-known address, and by nothing short of a miracle, she’s still there. Filthy, desperate and bleeding from a stab wound, he asks his former partner and friend for her help.

All in all, a fantastic start to the season. The premiere was superbly-written and had the perfect balance of action, suspense, emotion and character development, and it filled in the gaps of that first day of the Arrival, which were sorely missing thus far. The only complaint I really have is there was no real warning towards the end of the episode when it finally shifted back to present day, and so, for about a good 15-20 seconds, I was thoroughly confused. However, in the bigger scheme of things, the issue is very minor and had very little impact on what I rate as a solid “A” episode.