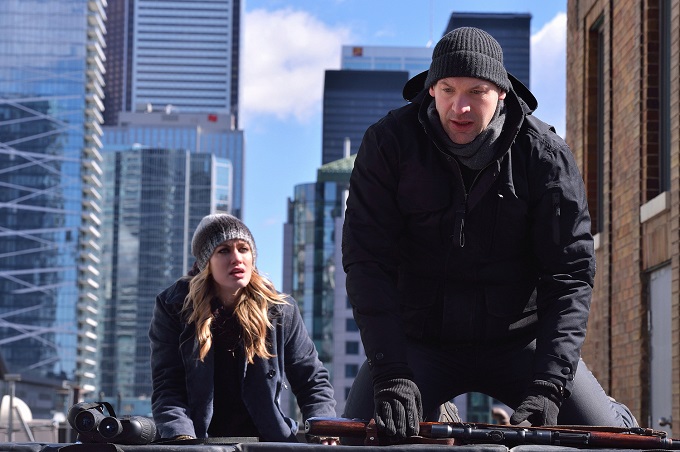 As the old saying goes, when you embark on a journey of revenge, be prepared to dig 2 graves. And, in actuality, that little conversation between Dr. Goodweather (Corey Stoll)  and Setrakian (David Bradley)  in last week’s episode about Eph retaining his humanity (i.e. — don’t murder people!) and Abe keeping his obsession with the Lumen in check I think clearly served as an omen. Unfortunately, neither character saw the warning signs and marched forward with their plans tonight, with both paying the price to varying degrees.

EPH AND HIS EPH-UP OF THE CENTURY

Not too long ago, Dr. Goodweather came up with the half-baked idea of hopping a train to D.C. to get mass-production started on his bioweapon, ignoring all risks and especially the warnings from Dr. Martinez (Mia Maestro).  Well, we know how that turned out. At Eph’s own admission, all he managed to do was to get 4 people killed. Given that, you would think Eph might give a little more thought to any last-minute, impulsive ideas that pop into his head — especially if it involves killing someone.

But, does he? Nope, and in fact, marches forward with his plan to kill Eldritch Palmer (Jonathan Hyde)  and does so without taking any time at all to practice his shot. Uh, Eph, how many shots from that rifle did you fire at Eichhorst last week, and how many actually hit him? I’m pretty sure the answer to the latter is a big ‘zero,’ and so, only an idiot would attempt a sniper shot from hundreds of yards away given that average. Oh, wait, I forgot, you **are** an idiot. Makes perfect sense now.

Of course, Eph’s partner-in-crime, Dutch (Ruta Gedmintas), isn’t much better. She’s also oblivious to Eph’s crappy aim, but then again, she’s too busy playing with her new surveillance gadgets and passing sexual innuendos back and forth to Dr. Goodweather. At first, this entire exchange between the 2 pissed me off because Dutch has bounced from Fet to Nikki and now possibly on to Eph, and Dr. Goodweather isn’t innocent either with his one-night stand with Leigh Thomas in D.C. So, at the end of the day, these 2 jerks may be made for each other, and so, you both go right ahead — flirt away! 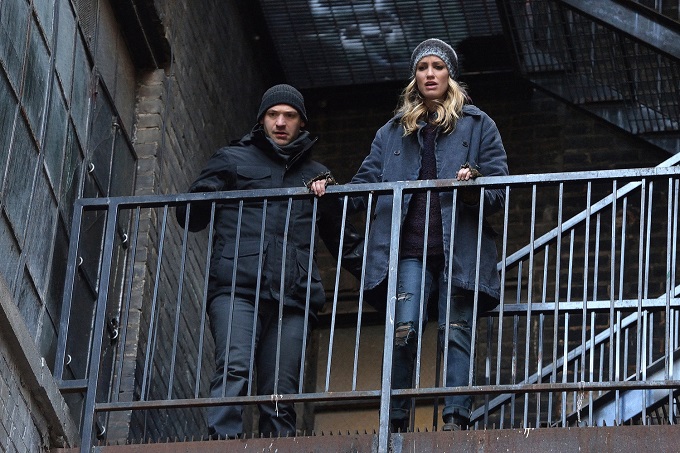 Of course, as would be expected, the entire Palmer assassination plot goes completely sideways. With Palmer and Coco having reunited after he professes his love for her, he decides to take her along to one of Justine Feraldo’s (Samantha Mathis)  public appearances, per the Mayor’s request. Eph takes the shot, and as was hinted in the promo of the episode, hits poor Coco instead. But, Eph and Dutch’s stupidity is kicked to an even higher level as they run back down to the ground floor of the building and actually expect to just walk out the door without any problems at all. Really? This is NYC, you idiots! 9-11 happened here, and we’re in the middle of a vampire apocalypse! Police are everywhere, and so, it’s no surprise that they are both captured within a minute of hitting the sidewalk. What. A. Dumbass.

The one good thing that does come out of all of this is that it forces Palmer to show his true colors to Coco. Faced now with possibly losing the only woman he has ever had a relationship with, Palmer threatens Eichhorst (Richard Sammel) and says the Master WILL heal Coco or he’s not doing another damn thing for their cause. You know, I was certain that the Master would respond by showing up and tearing Palmer’s head off (literally!) just like in the trilogy, but to my surprise, he does exactly what Palmer asked. The Master shows up at Stoneheart, gives Coco the special vampy juice, and in a snap, Coco is awake and good as new.

But, there is one caveat — the Master allows Coco to see him before he makes his graceful exit from Stoneheart. Intentional? I wouldn’t be surprised at all. Of course, Coco is terrified at the sight of a freak standing over her, and this forces Palmer to spill the beans on his involvement in the outbreak in NYC. Oh, boy. I can’t wait to see the fallout from this one, but something tells me it won’t be good. Remember, Coco is with Palmer for the sole reason of her thinking that Palmer is “the good guy” and one of the few people trying to stop this plague. I really don’t think she’s going to respond well when she learns he’s the one who started it all.

WELL, ABRAHAM, AT LEAST YOU GOT TO TOUCH THE LUMEN

While Dr. Goodweather is feeding his fixation on Eldritch Palmer, Setrakian takes Fet  (Kevin Durand)  and Nora along to feed his for the Occido Lumen. It seems that there are actually 4 people with the name of Rudyard Fonescu in NYC, and so, Setrakian spends most of the episode scoping out each of these addresses and making Fet and Nora his partners-in-crime by breaking-and-entering.

The first address on their list turns out to be the best not because they find the Lumen but because Fet gets the opportunity to blurt out one of his hilarious one-liners. No sign of the Lumen or Fonescu, which is made clear as soon as they set foot in the place. 2 strigoi and techno music at full blast — nope, definitely not Fonescu’s pad.

Oh, how I love Vasily! The only funny line in the entire episode, and he nails it!

Of course, the group has about the same luck at the other locations, and then, it gets worse when Fet and Nora hear about the attempt on Palmer’s life on the radio and that a man and a woman had been apprehended. Over the protests of Setrakian who insists that the Lumen is more important than any person including Eph and Dutch, Vasily and Nora leave to help their fallen comrades, leaving Abraham on his own to scout the final address on their list. 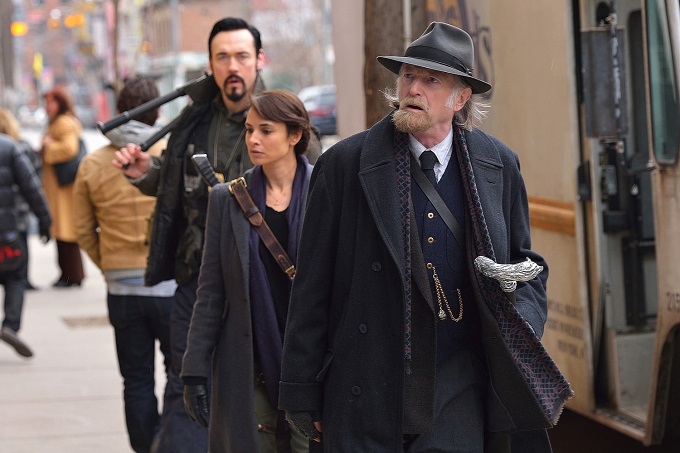 And, of course, what do you think happens? Yes, the last address turns out to be the real Fonescu, and with a stroke of luck, Setrakian finds the Lumen hidden in the floorboards. But, instead of springing for the door with book in hand, Setrakian can’t resist opening the book for a quick read. With his guard now down, Abraham is then knocked out cold by someone (presumably Fonescu himself or someone else looking for the Lumen). So, Setrakian is down for the count, and the Lumen is now in the wind. Nicely played, Professor!

All in all, this was a decent episode but not nearly as strong as some of the prior ones. The entire arc of Dr. Goodweather and his assassination attempt on Eldritch Palmer was completely predictable and only reinforced the fact that if this guy is supposed to be our “hero” and save us and the rest of the world, we’re in some serious sh*t. However, not all is lost as a couple of relatively brief scenes ultimately pulled the episode up and gave it that punch that we have grown accustomed to with The Strain.

The first is Justine Feraldo. This woman was my hero in last week’s episode, and she’s my hero once again. It takes someone with some serious brass balls to stand up to the Mayor and inform his precious East Side constituents that if they want help from her and her patrol, they would have to “donate” 1% of their worth. Oh. My. God. I swear I burst out laughing when she said that and wanted to reach through the television and give this gal a high-five. How brilliant! It makes perfect sense, but of course, the Mayor doesn’t see it that way. My hope is her strategy doesn’t get her killed, because as we saw, the Mayor has Palmer in his pocket, and we know how ruthless that man can be.

The second is the final scene, and this definitely served as the shocker of the episode. We learn that it’s not the police who have Dutch but instead, Eichhorst, and he has her chained in that dreadful “breakfast room” that we saw back in season 1. However, I wouldn’t flip out and have a stroke over Dutch just yet. As Vaun said to Gus when he kidnapped him, “I didn’t bring you all the way out here to drink you.” I think the same is true with Eichhorst here, and I don’t expect the next episode to open with Eichhorst having his stinger in Dutch’s neck. Instead, I believe she’s there to provide intel on Zack’s possible location, or even at the behest of Palmer since Fitzwilliams was supposed to have killed her and now, he sees that she’s still alive. Either way, I think there’s still time for the rest of the team to find and rescue her, which should make for some pretty intense final episodes of the season.