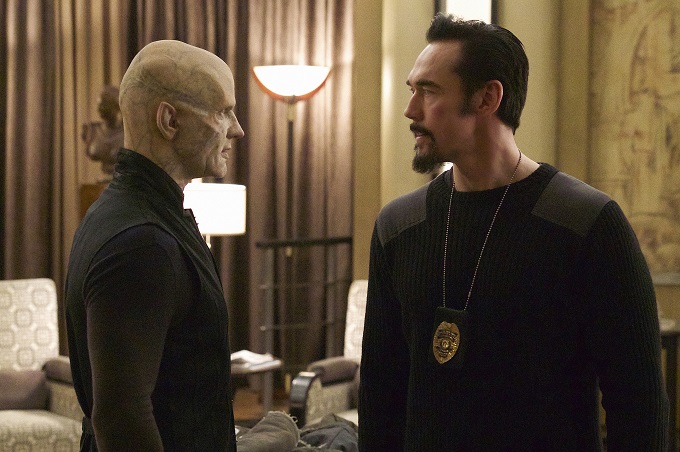 First, kudos and plaudits to the show’s new opening sequence (and, YES, this one is here to stay unlike the one-off we saw last year mid-season). Cool music, cool art, and we also see that Samantha Mathis  and Joaquin Cosio  have officially moved up to the big time, as their names now appear in the opening credits. Of course, if you’re a fan of the trilogy, Cosio’s promotion shouldn’t be any surprise to you since “The Silver Angel” is one of the main characters in the books. However, Mathis is a little surprising, but it’s something I’m definitely excited about. Feraldo isn’t in the trilogy, but she brings a fresh new component to the television series, and so, I’m very happy to see that she’s getting an expanded role this season.

Also thanks to the Setrakian voice over in the first 2 minutes of the premiere, we get a definite timeline. 23 days have passed since that ill-fated airline jet landed at JFK, and it’s been almost a full week since the events of the season 2 finale. Since then, the group has splintered off with each person focusing on a different task. For all of the Vasily Fet (Kevin Durand)  fans out there, you’ll be happy to know that everyone’s favorite rat catcher has a very big presence in the premiere — some good, some bad. Under the direction of Justine Feraldo, Fet has been called in to help a team of Navy SEALs who have formulated a plan to clear out the tunnels and take out this “King Strigoi” that everyone’s been talking about. And, who better to help hunt a big rat than a rat catcher himself? Unfortunately, Fet learns that the U.S. government has pretty much “written off” New York City, and if the SEAL team isn’t able to locate the Master in 2 days, they’re pulling out. Given how powerful the Master is, how successful do you think they are? If you’re a book-reader, you already know the answer to this question.

In the first half of the episode, Fet’s “Dream Team” does very well and is able to take out several large clusters of strigoi in the tunnels beneath the city. Of course, that gives Vasily and the SEALs a boost of confidence, and Fet is now convinced that they can bring the Master down themselves, without the help of a Magic Book and all the bullshit hocus-pocus that comes with it. Unfortunately, a jolt of confidence can sometimes make you **too* confident, and being too confident can make you stupid.

And, that’s exactly what happens. Fet spots a large number of strigoi converging in the tunnels, which makes him believe they are heading for several very large nests. So, the SEALs pack up their gear and are ready for some serious hunting, while also refusing to allow Fet to come with them to help. “No civilian ride-alongs,” the team leader, Kroft, (guest-star Aaron Lazar)  says. That will prove to be a fatal mistake. They do have some moderate success just like before, but as soon as they spot Eichhorst (Richard Sammel), I knew they were walking into a trap. They follow Eichhorst to a church, and from there, it is just one, big, bloody massacre. Several of the SEALs are literally torn in 2 (ewww…ewww…ewww), while others, like Kroft, are sucked dry by the Master himself. After Fet finally makes it to the church, he does manage to save a few of the SEALs, but for the most part, Vasily’s “Dream Team” is wiped out. 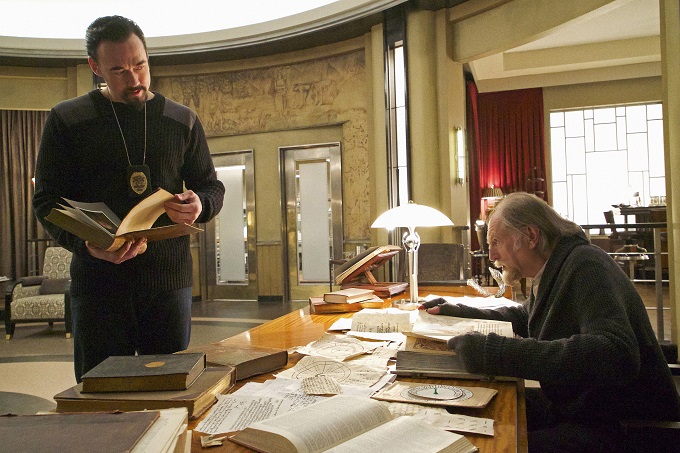 While Vasily is spending his days hunting the Master, Setrakian (David Bradley)  and Quinlan (Rupert Penry-Jones)  are busy deciphering the Lumen. Much like Fet, Quinlan too has a very large presence in the episode, and his interactions aren’t just with Setrakian. Fet shows up to check in with the Professor, and also it seems to “show off” his success with the SEALs, kind of like a boy bidding for his father’s approval and praise. But, things get pretty nasty pretty fast when Quinlan walks in on their conversation, and to be blunt, Fet acts like a total asshole. He chastises Quinlan for eavesdropping (even though they are at Quinlan’s place BTW!) and behaves like a condescending prick, saying Q’s not even human and drinks human blood “just like the rest of them.”

Of course, even though Quinlan is only half human, ironically he’s the one who behaves more human-like, keeping his cool but warning Fet that if his SEALs manage to locate the Master, they need to alert him — only he will know how to finish his off. But, again, Fet is riding on a “high” after several successful strikes and believes his team — the “best of the best” as Vasily calls them — can do it all solo.

Every failed empire has a legion of elite warriors. Technology offers no advantage over the Master. — Quinlan to Fet

Of course, as we know, Quinlan is 100% right, and Fet had to learn the hard way after losing nearly the entire SEAL team to the Master’s little trap. I honestly can’t wait for the next time these 2 meet, and I think a little “I told you so” is in order. Of course, that won’t happen because Quinlan is better than that.

Now, for the part that all of the Vaun die-hards have been waiting for…Even though Vaun and his team met their demise last season, it seems those weren’t all of the sun-hunters. More of them have arrived in New York, and their leader is a strigoi by the name of Lar (guest-star Ryan Hollyman). And, why exactly have they come? To put it simply — the Lumen. Oh, and they are pretty damn pissed at Quinlan for his little doublecross and insists that he shares anything he may learned from the Lumen.

You will share what you have found! — Lar to Quinlan

You should be wise not to threaten me, your only ally in this war. I am not your servant. I am your best hope. Fortunately for you, your enemy and mine is the same — Quinlan to Lar

It has been said that the Lumen holds the secret to the Master’s demise, and if that is true, unfortunately for the Ancients, that same secret would likely be a recipe for taking them out as well. So, obviously, the Ancients are desperate to find the book, and Lar and his team are there to help with that, as well as to protect them. Regardless, while it’s Lar slinging around the demands, Quinlan’s the one who wins the argument, completely dismisses Lar, and tells the Ancients off … AGAIN. One of the best scenes of the entire episode. Either way, I’m still very excited to see that the writers found a way to get the sun-hunters back into the story, and I also think it’s a nice gesture to the fans who were so upset with Vaun ‘s abrupt departure last season.

On to Eph (Corey Stoll) , he’s hitting the bottle pretty hard, and to be honest, is a walking mess. He stays half-drunk most of the day, but still manages to remain lucid enough to work on the bio-weapon, which, unfortunately, is losing its effectiveness against the strigoi. Are they adapting? Yeah, probably. Feraldo has gotten Eph put under her protective custody, thus making him no longer a fugitive, and she continues to supply him with raw materials for the bio-weapon. But, even she’s getting frustrated with Dr. Goodweather and wants him to train someone else to produce the bio-weapon so that he can lead a larger team of scientists. But, we all know Eph and can guess that doesn’t work.

This is Eph’s life now, and then, at the end of each day, it’s back to Kelly’s house, where he gets completely wasted clinging to the hope that Zack will somehow miraculously return home. Zack is a no-show (well, except for in Eph’s dreams as a strigoi), but he does get the 2nd best thing — Kelly (Natalie Brown).  We see that Zack is alive and well, and what’s more, Kelly tells him that the Master is allowing them to be together. But, when Zack asks why, Kelly responds, “Because I’m going to do something for him.” And, we quickly learn what that “something” entails.

Again, no Zack, but Kelly does show up at her old house and with a 1/2 dozen or so of those creepy feelers. No worries, Eph isn’t hurt — those feelers are only there to protect Kelly and also to shake Eph up a little bit, I’m sure. Kelly says that Zack is alive and safe and that Eph can have him back in exchange for 1 thing — the Lumen.

We want the Lumen. You have a choice to make. The Lumen or Zack — Kelly to Eph

Now, if they had stopped here and showcased only Fet, Setrakian, Quinlan, and Eph, I would have given this episode a solid “A.” But, for some unknown reason, someone in the writers’ room felt the need to interject a single scene of Gus (Miguel Gomez).  While everyone else is out fighting the plague, it seems that Gus is back at home, bleeding himself dry trying to keep his strigoi mother alive. Seeing Gus sling a dog-bowl full of his own blood at his mother is heart-wrenching, and I truly just want to give the guy a hug. But, that doesn’t mean it was appropriate for this episode. Why couldn’t they have waited until next week’s episode? Again, it was a powerful scene and Miguel Gomez nailed it, but all of that felt negated due to how obtrusive the scene felt to the overall flow of the episode.

Even so, the episode is still a very good opening to the new season. The Master’s plan for Zack is quickly revealed, without dragging it out for several episodes. Setrakian and Quinlan are making headway in deciphering the Lumen. And, while Fet’s failure with the SEALs may seem like a one-off, trust me when I say it might have far-reaching consequences, much more than we realize right now. Some of the SEALs the Master simply killed, while others — like their leader, Kroft — he drank and quite possibly infected. And, remember some select sentient strigoi can retain their thoughts as well as their abilities after being infected. So, what does this mean? This means there’s a good chance that Fet’s “the best of the best” may still be “the best of the best,” but playing for the other team the next time we see them.