Walker Stalker Nashville 2017: Karl Makinen Opens Up About His Role On “The Walking Dead” And Working With Lennie James [Photos + Video] 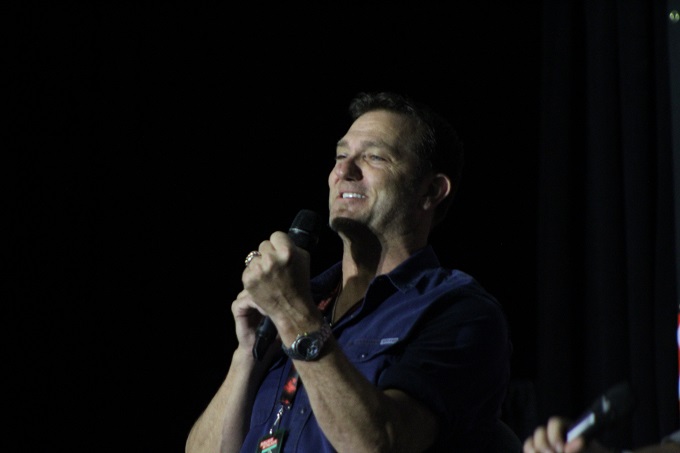 Whether your character lasts for only 4 episodes or for 4 years, any actor that has worked on The Walking Dead will tell you that being indoctrinated into such a passionate and loyal fandom is an unforgettable experience. That’s exactly what actor Karl Makinen ,  who played “Richard” in season 7 of the series, said this past weekend as he attended his very first Walker Stalker convention in Nashville.

While Richard may have been in only 5 episodes, he will most certainly go down as one of the most memorable characters of the entire season. As we learned through the course of the season, Richard truly had a good heart, but that didn’t necessarily mean being a pacifist like King Ezekiel, Carol, and Morgan. In his eyes, not fighting the Saviors was only delaying the inevitable. Eventually, the Saviors were going to cross a boundary — and quite possibly kill someone — and then, the Kingdom would have no choice but to fight. That’s when Richard concocted the idea of baiting Jared to kill him, with the hope that his death will cause Ezekiel to wake up and fight back.

This all culminated with the stellar episode “Bury Me Here,” and while the series may have caught some bad press for what seemed like a lack of quality episodes in season 7, this one stood out and garnered praise from most critics, as well as fans. Perhaps one of the best parts of the episode was the epic performances of both Makinen as well as Lennie James (“Morgan”). Richard worked tirelessly trying to convince Morgan that what he was doing was right, but in the end, Morgan goes full-on crazy and kills Richard for causing the death of Benjamin in his plan for revenge against the Saviors. I don’t know about the rest of the fandom, but next to the big Lucille season-opener, this is the episode I’ll remember the most in season 7, and in particular, this scene. As it turns out, these scenes — and especially working with Lennie James — are what Makinen enjoyed the most about working on The Walking Dead. Check out what he had to say.

Makinen goes on to say that while he may no longer be on the show, he definitely still watches. In fact, one of the things that intrigued him the most towards the end of the season is the 180 that Eugene (Josh McDermitt) pulled. Has Eugene actually gone to the dark side, or is he just pulling one big con like he has done so many times in the past? Makinen posed this question to the audience, and while the vast majority believed Eugene is just gaming Negan, Makinen seemed pessimistic.

I think you may be wrong. I really do — Makinen on whether Eugene is playing a con on Negan

Besides still watching the show, Makinen has also remained in contact with the cast. While he never asks any of them about the details on season 8, he was just recently in contact with most of the cast, and all of them were in Atlanta shooting the season 8 premiere. While Makinen provided no spoilers, of course, the fact that they were all filming says that the entire cast may be in the season opener, and so, the fans should probably expect an even bigger premiere than the one last year.

As for moving on from The Walking Dead, it didn’t take long for Makinen to land himself another role. You can now find him on Showtime’s revival of Twin Peaks, where he plays Inspector Danny Hollister. He laughed when asked about the role and said that it was even more secretive than when he auditioned for The Walking Dead. Heck, they wouldn’t even tell him whether the role was for television or for a movie. Of course, by then, he was already used to that because of his time on The Walking Dead and even lamented about whether that may have helped him get the part. Regardless of whether it did or not, Makinen just seems happy about where his career has led him, and of course, he’ll always remember and always be thankful for the time he had on The Walking Dead and its wonderful fandom.

Twin Peaks airs on Sundays at 9/8c on Showtime.