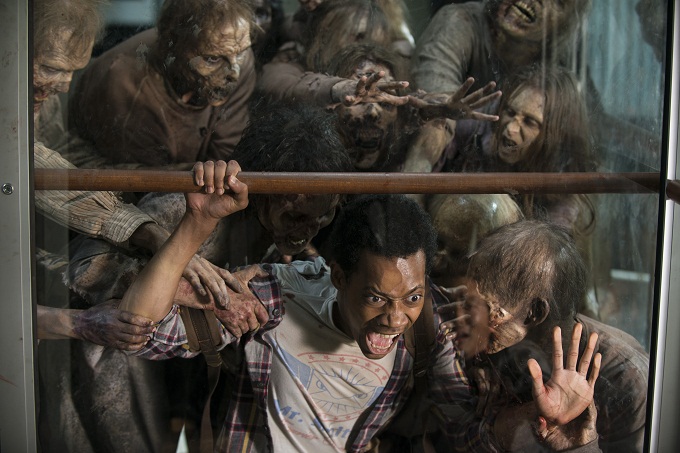 While the season 5 finale of The Walking Dead was fantastic and was really a perfect ending to a perfect season, if you ask fans which episode they’ll remember the most from the entire season, I can almost guarantee you it’ll be “Spend.” And why? Because of that horrific revolving door death scene of our poor Noah. Man, oh, man. Up until now, there was only scene from The Walking Dead that I really couldn’t watch and that was the death of Dale back in season 2. Well, I have a 2nd one now, and even though it’s been months since the episode aired, I still can’t watch it without cringing and forcing myself to look away.

This past week in at Walker Stalker Con Orlando, actor Tyler James Williams made his first convention appearance since his character’s death back in March, and because of that and the huge impact of the episode “Spend,” Tyler was given his own panel. While most viewers were shocked with Noah’s death or at least with the manner of his death, Tyler actually wasn’t. Including “Spend,” Noah had been in 9 episodes in season 5, and there were plenty of signs of his imminent demise in the episodes leading up to 5.09, especially the ones in the second half of the season. Noah being told that he was “part of the family now.” Beth being the sacrificial lamb at Grady Memorial that bought Noah his freedom. The talk with Reg about his wanting to be an artifact and his making plans for the future. And, of course, the lyrics of the song playing in the van saying “You’re gonna die!” 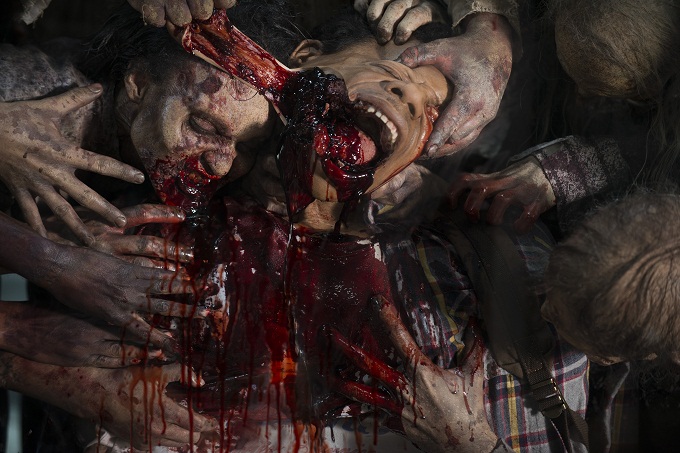 However, perhaps the most interesting part of the panel was Tyler’s comments about comic-book Negan. For those who are not familiar with The Walking Dead comics, perhaps the biggest villain and THE one character whose introduction most fans are anticipating the most is Negan. He’s brutal, ruthless, but at the same time one of the funniest characters in the entire comic-book series. For the viewers who are just dying to find hints that Negan may be close on the horizon, Tyler says there are plenty of clues especially in the episode “Spend.” He says that most of the clues are quite subtle, and to find them, you need to pay close attention to the things in the background. Tyler did share one “clue” that was part of the revolving door death scene and one that the network forced them to cut because it was too graphic and disturbing. As Noah’s face is being ripped apart by the walkers, one of the things the writers wanted to do in that scene was to have one of Noah’s eyes pop out of its socket, but the network wouldn’t allow it and so, they had to edit that part out of the scene. Now, why is this significant? Thinking back to the Walking Dead comics, the one character that Negan is notorious for killing is Glenn. Glenn is “Lucill’ed” and has his head bashed in by Negan in front of the entire group, including his pregnant wife, Maggie. Well, on Negan’s 2nd swing of the bat, one of Glenn’s eyes actually pops out, which is exactly what the writers wanted to do with Noah’s death scene.

Coincidence? Perhaps. But, Tyler doesn’t necessarily think so. While he has no idea when Negan will ultimately be introduced in the television series, he thinks that all of these hints are real signs purposely planted by the writers to tell the fans that yes, Negan is coming.

Even though Noah was a part of the Walking Dead family for only a short while, some viewers hold out hope that maybe we’ll see Noah again, perhaps as a walker. Tyler, however, is pessimistic and thinks that Noah’s body was torn all to shreds, including his legs, and so, no being a “walker” for him. But, if you’re a fan of Tyler like I am, you should know that he already has a new project lined up. A new Criminal Minds spin-off is in the works, and Tyler is to portray tech guru, Russ “Monty” Montgomery. There is no premiere date for the series, but it will likely be early 2016.

Check out the below video clip from Tyler’s panel, where he talks about that revolving door scene and the heartbreaking death of Beth Greene.