After The Walking Dead panel on Friday on Hall H, I attended a Press Conference with the cast and Executive Producers, and Robert Kirkman said something that really resonated with me. When asked how they have been handling the secrecy around the cliffhanger finale, he responded very bluntly, “You say nothing.” No shit! This has been a general theme since the finale aired back in April, and continued this weekend at San Diego Comic-Con. Basically nothing substantial was revealed during the panel, and the same is true of the Press Conference.

However, once you had tap-danced around all of the Lucille questions, we actually did get some good info on what else is to come in season 7 of the insanely-popular zombie drama. At the top of the list is the reveal that comic fan-favorite, Ezekial, will be introduced as well as a CGI version of his pet tiger, Shiva. To be portrayed by voice actor, Khary Payton,  Ezekial is the charismatic, albeit eccentric, leader of The Kingdom — another community of survivors and where Morgan and Carol are presumably taken at the end of the season 6 finale.

Needless to say, we have lots of amazing things to look forward to come October, and I don’t know about you, but I’m super-excited. The cast and writers appear to be too. Check out what they had to say:

ON EZEKIAL AND SHIVA BEING INTRODUCED IN SEASON 7 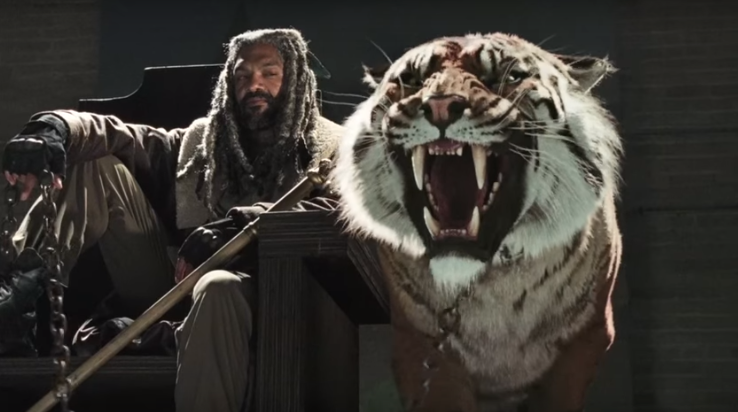 Robert Kirkman stated that he loved bringing Ezekial and Shiva of The Kingdom to the series. “It was their time,” he said. He also said that other characters familiar to the comic-book fans may be introduced later in season 7 as well. As for CGI vs. using a real tiger, the answer is that they used CGI due to filming restrictions, actor safety, and expense. Ezekial is expected to make his first appearance in episode 3 of the new season.

WHEN WAS RICHONNE CONCEIVED? AND WHO WILL BE KING EZEKIAL’S “QUEEN” NOW?

Now that it has been officially announced that King Ezekial is being introduced, one of the biggest questions is who will become the Kingdom leader’s “Queen.” In the comics, that honor went to Michonne, but unfortunately, Michonne is now with Rick. So, unless Scott Gimple wants to risk a riot with all of the Richonne fans by breaking them up, it sounds like this arc is likely to go to another character.

Executive Producer and Showrunner Scott Gimple touched briefly on this and said that the idea for Richonne was initially conceived early in season 4. You may also recall that this is right after Andrea (who had ended up with Rick in the comics) had been killed off in the season 3 finale. Going into season 4, Gimple said he had “an epiphany” about pairing Rick with Michonne, and they started laying the groundwork from there. Because of that, my guess is the writers also planned out who would replace Michonne on Ezekial’s throne at the same time. But, who will it be? 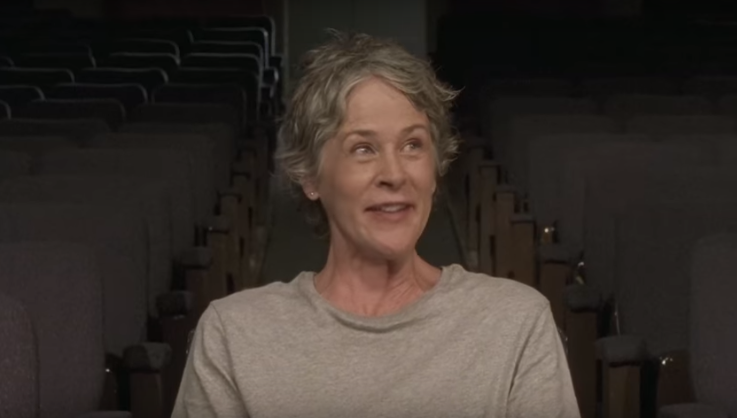 Of course, we’ll have to see where it all goes in season 7, but if I had to bet, I’d put my money on Carol. From the trailer, we already know that both Morgan and Carol are at the Kingdom, with Carol recuperating from the gunshot wound she sustained in the season 6 finale. And, that hilarious scene with Carol proclaiming “I don’t know what the hell is going on in the most wonderful way!” I strongly suspect will be when she is first introduced to Ezekial sitting on his throne with Shiva by his side. A very similar scene plays out in the comics when Michonne meets Ezekial for the first time.

As most of you know, I’m not a big fan of the Richonne shenanigan, but if it gets Carol and Ezekial together, then I just might jump on the bandwagon.

ON THE ZOMBIES AND SPECIAL EFFECTS COMING IN SEASON 7

GREG NICOTERO: “There’s some amazing stuff coming up. Just you wait. We’ve come up with some pretty amazing gags, but that all serve the story. For anything that happens on the show, we never stop the show to do an elaborate special effect, and everything is important to the story line.  But, as we know, zombies aren’t in every, single episode. So my team and I spend a lot of time finessing things and finding new things. We look for opportunities to revisit things, tweak it, see what worked, what didn’t work. We’re 7 years into doing this, and we continue to push the boundaries. 7 years ago, there was nothing like this on TV. From an acting standpoint, from a storytelling standpoint, from a make-up and effects standpoint. The thing I’m most proud of is when someone will come up to me and say ‘I’m a make-up artist because I watched The Walking Dead.’ That’s how I got into it, from movies I watched when I was a kid.” 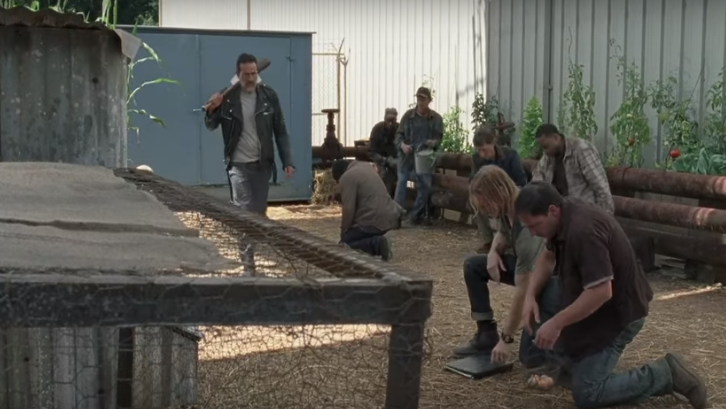 JEFFREY DEAN-MORGAN “Right now, this Comic-Con is going to be OK[Laughs]. I think next year could be a little different. Next year I think it’s going to be a salute of middle fingers when I come out on stage[Laughs] But, it’s been great being with these guys, and I know it’s a horrible deal, it’s been horrible, being the cause of it in a way. That being said, I think I have been embraced by the cast. And, I should embrace them, because it’s going to be hard. It’s going to be hard until it’s not anymore, and I don’t know when that’s going to be.”

GREG NICOTERO: “And, I will tell you, too, the 2 nights that we shot, that whole long sequence, Jeffrey was just finishing The Good Wife and flew in and had like one day of costume fittings. Then, we shot that entire 12-page dialogue. Then, you think about just how you would prepare for that, but he nailed it. It was just amazing. On the DVD/Blu-ray, we have the alternate dialogue from the comic-book where he says ‘fuck’ every other 3 words. But, it was amazing.”

“And the cast surrounded him and brought him in. We are so lucky.”

JEFFREY DEAN-MORGAN: “Yeah, and to do that for a guy who has just walked in and turned everything upside down, I think that’s a testament. I’ve never seen anything like it. ”

“I was a little nervous going in. But, I remember walking out of the trailer for the first time and having this weird kind of calm. It was a spot I don’t think I’ve settled into as an actor before. I torture myself. I don’t sleep the night before. But, I remember as I was just about to walk out the door, I felt it was going to be OK. I knew what I had to do. And, it’s been like that ever since then, for this role.”

ANDREW LINCOLN: “I remember the first time [Jeffrey] was there, and he had just come on set. The cameras were set up, and there were like 8 cameras on you [pointing at Jeffrey]. And, you were like, ‘Are we doing a rehearsal?’ And, I looked at him and said, ‘Ummm. Nope!'[Laughs] And, he **nailed** it. All of it in just one take. It was amazing. It was so exciting.”

CHRISTIAN SERRATOS: “Yeah, and we really look out for each other. When we were shooting episode 16, I hadn’t even had a conversation with Jeffrey yet. I hadn’t really met him, and we just went straight into it. Then, as soon as we were done [shooting that final scene], he extended his hand and helped me up. Who would know that he plays such an aggressive character. If it were a different set or a different situation, maybe we would keep our distance. I think that says what a family we really are.”

The Walking Dead  returns for season 7 on October 23rd at 9/8c on AMC.