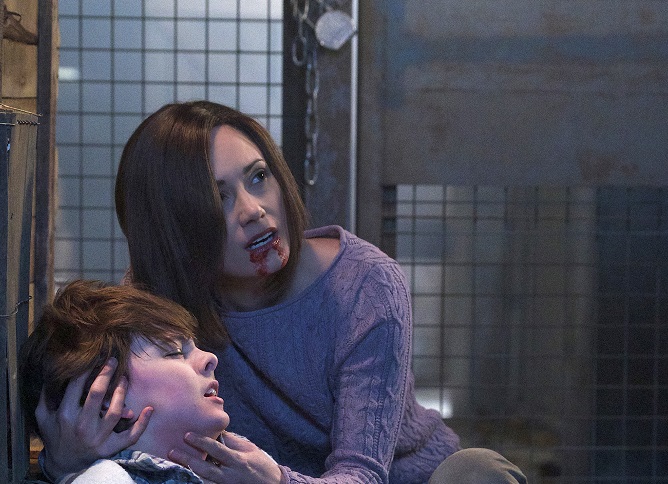 Warning: Major spoilers ahead for those who have not seen episode 3.03 “First Born”

Well? Have you snapped out of it, or is your head still spinning after that mind-blowing ending to tonight’s episode of The Strain? Well, assuming that you have because you are now reading this, where in the hell do we go from here? Your guess is as good as mine, but fortunately, I was able to chat with series star Natalie Brown  after I watched the screener, and she does offer a few goodies as to what to expect after that game-changer of an episode. Check out what she had to say:

TV GEEK TALK: First, I want to tell you something. When I screened Episode 3.03 a few weeks ago, that ending damn near gave me a heart attack. Now, I forget, have you read the books?

TV GEEK TALK: So, yeah, you KNOW none of that happens in the trilogy. Okay, when you read the script for the first time, what did you think? What was your initial reaction?

Natalie Brown: “I am curious as you are about what will happen next. Just like at the end of season 1 when we found out that sunlight can destroy vampires but things don’t go quite the way that they predicted. We may think we’ve destroyed the Master, but have we really? Is he really an entity within a host or is he an entity that can be destroyed? And, what form will he take on next?”

TV GEEK TALK: Yeah, and then, we see that big worm crawl away, and so, we have to wonder is it really over and what will happen next. Regardless, I’m very excited.

Natalie Brown: “Me too! The possibilities are endless now.”

TV GEEK TALK: And, I loved what they have done. They’re not taking the books at some sort of script, and now, they have changed something very big.

Natalie Brown: “Yes! And, we found that out at the end of season 2. I mean, if there was someone that we thought was safe, it was Nora. But, no one is safe.”

TV GEEK TALK: Those final scenes of the episode were actually very physical for Kelly. Can you talk some about filming those scenes? Was that all you, or did you use a stunt double?

Natalie Brown: “Both. It was a very forgiving night weather-wise, and it was right on the water. And, vampires are also challenged by water. Also, I’m still a little angry that Eph was able to land 2 left hooks, and the odds of reconciliation with Kelly are definitely off [Laughs]. Couples therapy is definitely out of the question [Laughs]”

“But, filming it was quite fun. We did have the aid of stunt performers and obviously a stunt coordinator to help us, but whenever possible, both Corey and I are very game. Whatever may help the Director get the best shot, I’m all for jumping in for a little bit of the action. Another thing I will say is I was so excited to finally be in a scene with Quinlan and also David Bradley. But the way we shot it, everything really kicks into high gear with the battle. Boy, when Kelly is told she can go. Wow. And, even though Kelly is given permission to scurry off to safety after the Lumen is secured, Kelly would have been more than willing to stick around to throw down.”

TV GEEK TALK: Now, I won’t even ask about what may come after such a big episode, but I guess the one thing we probably know for sure is that was the end for Bolivar. I mean, I don’t see how he can come back from being beheaded. What was it like that day on set, knowing that it was the end for Jack Kesy’s character?

Natalie Brown: “We had a ton of fun. Jack Kesy is just so funny. And, with very little dialogue, he was able to embody the entity of the Master so well. But, when everything is cut, he acts so cool. He’s also a very talented free-styler, and we actually came up with a very funny rap set.”

TV GEEK TALK: Will we be able to see any of that? Like may on a DVD set, or what have you?

Natalie Brown: “Maybe, or I might be able to clip a few photos later. But, it’s not just Miguel Gomez and Kevin Durand who are the gifted free-stylers; Jack Kesy can battle with the best of them. I miss him already!”

TV GEEK TALK: Without giving any spoilers away, of course, what can you tease about the rest of the season? One thing I would like to add too is at the end of that final scene, we really don’t see what happened to Kelly. We see her run past the Master, the bullets start flying, but we don’t see her again.

Natalie Brown: “The interesting thing about me coming to the end of the 3rd script is what kind of thought control will Kelly be able to exert without the voice of the Master in the interim while we wonder what form he will next take on. What about the Kelly/Zack dynamic? How safe is Kelly with Zack now? How will Eichhorst step in? And, there will be some interesting alliances that will be formed along the way.”

Of the entire interview, what Natalie said in that very last part is the most interesting and serves as a major clue as to what may happen next. From what Natalie said, at the moment when the Master was beheaded, while technically still “alive” because of the super-worm, he lost most — if not all — of his control/influence over his minions. What’s more, until he finds another host, that control will remain lost.

Well, that’s heavy shit, folks. While Kelly was able to scurry to safety and evade the bullets and silver bombs, what’s going to happen when she returns to Zack? If the Master’s influence is truly gone, what will prevent her from just turning Zack? We saw that almost happen in last week’s episode, and even though the “caul baby” story hinted at an “unbreakable bond” between mother and son, at the end of the day, that could be nothing more than an urban legend. Mere hocus pocus, just like some say the Occido Lumen is.

The other big question is who will be the new Master. Thomas Eichhorst is an obvious choice, but would we really want that? After all, Richard Sammel does such an impeccable job as Eichhorst, and so, I’m not sure I’d want to lose that character. Another big candidate is Palmer. The writers have kept Palmer alive, it’s what he’s wanted from the get-go, but will the Master reward a man who so blatantly betrayed him last season? Of course, keep in mind the Master is likely desperate now.

Aside from these two, another possibility — and one that I’m leaning towards — is Kelly Goodweather. I don’t know if I necessarily like the idea (yet) of Kelly becoming the Master, but I do find it very intriguing. It would be a gigantic deviation from the source material, and given the number of television series that are being remade but cast with female leads, such a decision would “fit.”

Regardless of what comes next, this is definitely an episode no one will forget anytime soon. In the meantime and until next week’s episode, let the speculation begin!