SDCC 2015: The Walking Dead Season 6 Trailer Is Here With Our Detailed Analysis [VIDEO] 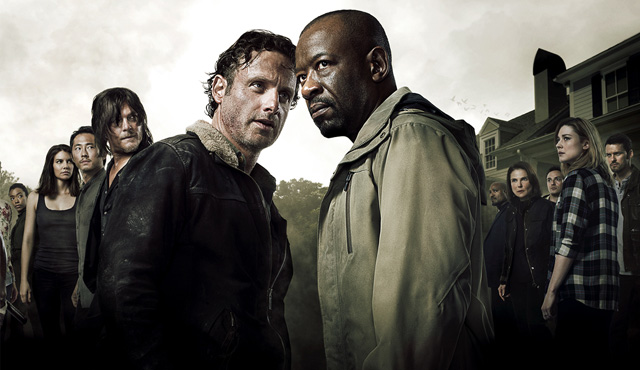 Okay, folks, we *finally* have a premiere date. As of October 11th the wait will be officially over, and Sundays will be perfect once again. Also below is my detailed analysis of the season 6 trailer which was also released today as part of the San Diego Comic-Con Walking Dead panel. WARNING: Read at your own risk. I have read every issue of The Walking Dead comics at least twice and am basing a good deal of my analysis of the trailer on what I know about the events in the comic book series. So, several points in my analysis may turn out to be correct, and so, if you don’t want to spoiled, stop reading right now and go directly to the below trailer video.  Now, let’s get started.

First, and foremost, lots and lots and lots of walkers in this trailer. In fact, there are several scenes which indicate Alexandria may have a horde on their hands. Just check out the scene at time 2:10 in the trailer — that’s a horde, and it’s right outside the front gate of Alexandria. As a comic reader, this is no surprise to me, and in fact, it was my top prediction for season 6 which I included in my review of the finale. In the comics, the gunfire and explosions from Alexandria’s fire fight with a group called the Scavengers attracts a mega-horde — one bigger than we had ever seen before — to the safe zone. Several of the walls came down (as was predicted by Noah in his conversation with Reg Monroe in last season’s episode “Spend”), and several people died. There are many clues in the trailer that hint we are heading for the biggest walker showdown in the series thus far. One is, of course, the massive group of walkers. Second, we see several of the Alexandria residents hiding and huddling in a house or some small shack. This also occurs in the comics when the people of Alexandria panic when the walkers manage to bring down the walls and scatter in all directions to hide. Now, I won’t reveal who all died in this huge attack in the comics, but I will say there were several, one of which was Douglas Monroe — and, in the television series, this will equate to Deanna Monroe. I actually like Deanna Monroe — and I absolutely love actress Tovah Feldshuh — but she’s one of those characters who’s smart and is a good politician, but unfortunately, in this new world, people like that don’t survive long. 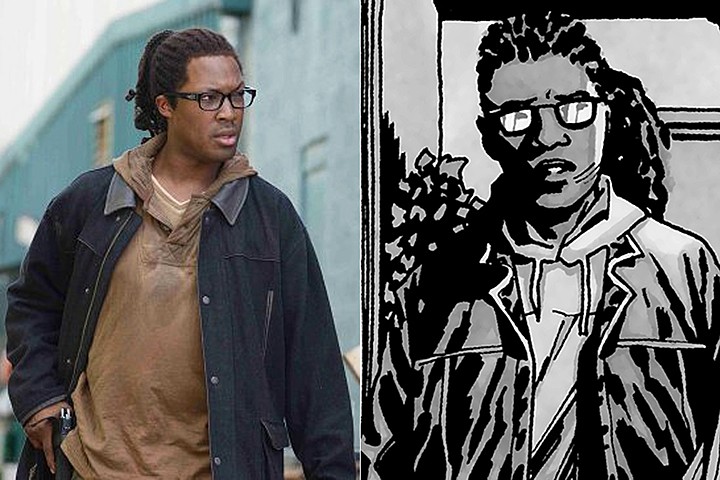 We also get our 1st peek towards the end of the trailer at newcomer, Corey Hawkins, who was revealed a while back to play comic-book favorite, Heath starting in season 6. We see him with Glenn in the trailer at time 2:40, which jives with his role in the comic-book series. Comic-book Heath teams up with Glenn as a supply-runner after his best friend, Scott, had been mortally wounded on a run, the same run where they crossed paths with the above-mentioned Scavengers.

Speaking of the Scavengers, we won’t know for sure until the premiere, but every indication is the Wolves we were introduced to in the season 5 finale will turn out to be a souped-up version of the comic-book Scavengers. In fact, the scene of Daryl tied up is probably one of the group’s first encounters with the Wolves, and the man on fire that falls over the walls of Alexandria is probably part of an attack by the Wolves.

Lastly, this trailer points to a possible showdown between Rick and Morgan, which I don’t buy for a minute. Yes, Rick has officially gone off the deep end, and yes, I’m sure Morgan doesn’t agree with what Rick has become. But, he wouldn’t try to get Rick and his people run out of Alexandria, and Rick would certainly never point a gun and threaten to shoot Morgan. Instead, Morgan would try to help Rick and try to reason with him. Bottom line — Morgan isn’t a Shane and wouldn’t betray Rick no matter what. Basically, I think these Rick vs. Morgan hints are just red herrings trying to throw the fans off, like they tend to do every year in these trailers.

Am I excited for season 6? Well, hell yeah! And, I bet every Walking Dead fan is and counting the days to the season 6 premiere.

The Walking Dead  returns for season 6 on October 11th at 9/8c on AMC.