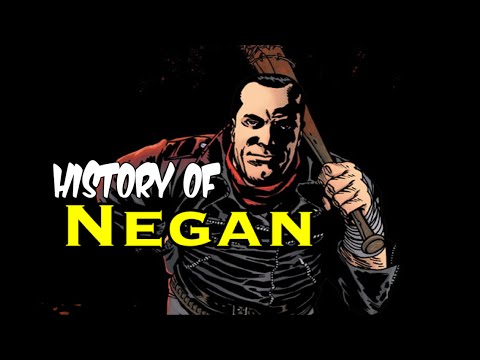 Warning: Spoilers ahead for those who have not seen Issue #3

If you have read my past reviews of The Walking Dead, you know that I’m a fan of super-baddie Negan. Adding in Rick Grimes’ slaughtering 30+ of Negan’s men in the 2nd half of season 6, it made it even easier for me to take the side of the bat-wielding villain who bludgeoned to death *someone* in the season-ending mother-of-all-cliffhangers. Even so, I knew — and still know — that I’m in the minority. In the fans’ eyes, Rick Grimes and his merry band can do no harm, and so, if they killed dozens of people with no provocation whatsoever, well, it must have been because they felt they had no choice.

What??!! How could actions like that be justified? Upon thinking about it, I finally realized it’s because the fandom has followed Rick and his group *since the beginning*.  That is, we all know who Rick was before everything blew to hell, what he’s been through, and why he’s the way he is today. But Negan? He’s just this asshole who showed up out of the blue, declared himself King of the World, and then, mercilessly beat to death one of our beloved characters. But, the problem is none of us know NEGAN’s story, who he was, and how he got here and became the leader of the Saviors. Even in the Walking Dead comics, very little is revealed of Negan’s past. In one fan letter, Robert Kirkman stated that Negan had been a used car salesman, but beyond that, nada.

That’s where Charles Adlard, Robert Kirkman, and Image+ Comics come in. Over a course of 12 issues, Image+ will be filling in Negan’s backstory, thus giving fans a glimpse into this “monster’s” life before the zombie apocalypse, before Lucille, and before the Saviors. Well, Issue #3 was just released yesterday, and up until then, it didn’t look good. Issue #1 gave us our very first look where we learn that Negan had been a high-school table tennis coach, was married, and just seemed like an ordinary guy. But, then, in Issue #2, we also learn that while Negan’s wife has cancer and is fighting for her life, he’s banging some slut on the side. Need I even say Jonathan Edwards?! So, at that point, it really looked as if Negan had always been a prick, and the apocalypse was just the perfect opportunity for him to prove that to the world.

Well, Issue #3 changes all of that. Here we see Negan who — maybe out of love, maybe out of sheer guilt — leaves his lover and returns to be with his wife. But, we also learn that Negan’s wife knows all about the affair and even supports it. What’s more she doesn’t understand why he ended it and in a way, chastises him for it. 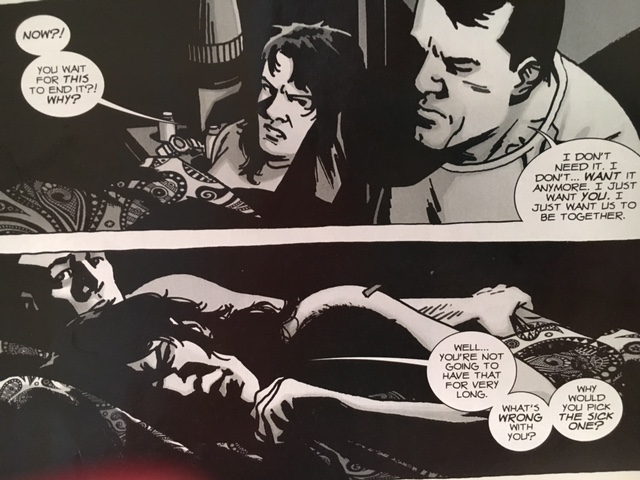 It doesn’t matter, though, because Negan stays regardless and all the way to her being in the hospital, bedridden, and very close to death. Then, it finally happens. Someone runs in, informs Negan that they have evacuated the hospital, and that he must leave now if he wants to live. Of course, Negan refuses to leave his wife, and when he looks out of the window, he sees burning cars and the dead walking through the streets. End of issue. 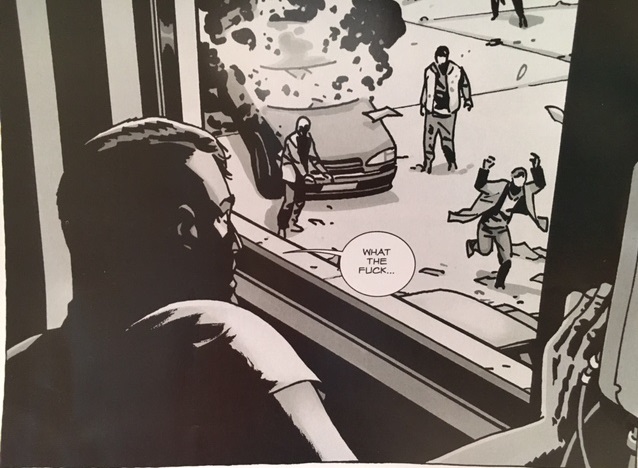 I absolutely can’t wait to see what happens next! I’m certain he won’t leave his wife behind, and my guess is she’ll die on her own, reanimate, and then, he’ll be forced to put her down. Either that or he’ll pull a Morgan and just let her walk among the dead. Also, as morbid as this sounds, could it be that these final moments with his wife the reason why Negan seemed so enamored with Alpha in the comics the first time he saw her? After all, the last image Negan has of his wife is her being bald lying in a hospital bed, and along comes this very strong, but very bald, chic who happens to be the leader of the group who’s at war with Rick and Co. Again, very morbid thought but on some level, it does make sense.

Regardless, the point is Negan has redeemed himself from the last issue. Cheating on his wife — not cool! But, in the end, he did the right thing, and that tells me he’s a good man with a good heart.

What does everyone else think? Has this changed your impression of the series’ super-villain?

Negan’s story continues with Issue #4 which will be released next month, likely over San Diego Comic-Con weekend.