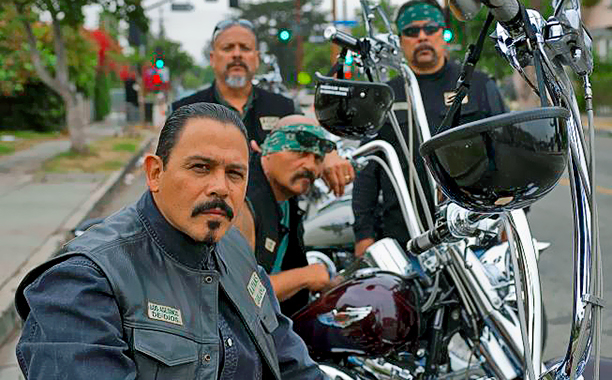 For seven seasons, Kurt Sutter’s award-winning Sons of Anarchy was the highest-rated ongoing drama series in FX history. Now, Sutter returns to that world with Mayans MC, a drama series pilot for FX and the next chapter in the SOA saga, which he co-wrote with producing partner Elgin James.

Sutter will direct the pilot episode and serve as Executive Producer, with James serving as Co-Executive Producer. The pilot is being produced by Fox 21 Television Studios and FX Productions, with production scheduled to begin in March.

Mayans MC is set in a post Jax Teller world, where EZ Reyes, a prospect in the Mayan MC charter on the Cali/Mexi border, struggles with his desire for vengeance against the cartel, and his need for respect from the women he loves.

Any fan of SOA knows how the Mayans were recurring and pivotal players during the show’s seven-year run. The club of Hispanic men controlled northern California and all of Nevada, and the president of the Oakland Chapter was Marcus Alvarez, played by Emilio Rivera. Their cuts bore the phrase “Los Asesinos de Dios” which means Assassins of God.

It is still unclear what role Rivera will have in the new series, but he is currently starring in Syfy’s zombie drama, Z Nation. Rivera plays Hector Alvarez/Escorpion, a bad guy gone good who joined the show’s group of Z-whacking heroes at the end of the 2nd season. It was initially thought Rivera’s character had been killed off in the season 3 episode “Heart of Darkness,” at least until he opens his eyes at the very end. No word yet on whether Rivera will remain a series regular on Z Nation or if this SOA spin-off had anything to do with the direction his character has taken this season.

Kurt Sutter is the creator, writer, producer, director and actor behind the hit FX television show Sons of Anarchy. He is also the creator, writer, and producer of The Bastard Executioner and worked as a writer, producer, director, and actor on The Shield. Sutter made his feature film debut Southpaw starring Jake Gyllenhaal and Rachel McAdams, written by Sutter and directed by Antoine Fuqua; The Weinstein Company released the film in July 2015. Sutter recently announced a new comic book collaboration with award-winning BOOM! Studios. Kurt previously partnered with BOOM! to create a Sons of Anarchy comic book as well as the original series Lucas Stand about a veteran turned hit man for Hell. Their newest collaboration, Sisters of Sorrow, centers on victims of abuse who spin their pain into vengeance through the cover of vigilante nuns. NBC Universo, the modern entertainment and sports cable channel for Latinos, announced this week that it has added Sons of Anarchy en Español to its upcoming 2017 slate.